As people join hands to increase awareness on climate change and call for action to reduce its impacts, we need to vouch for local solutions that are simple, cost effective and allow communities to engage and deliver 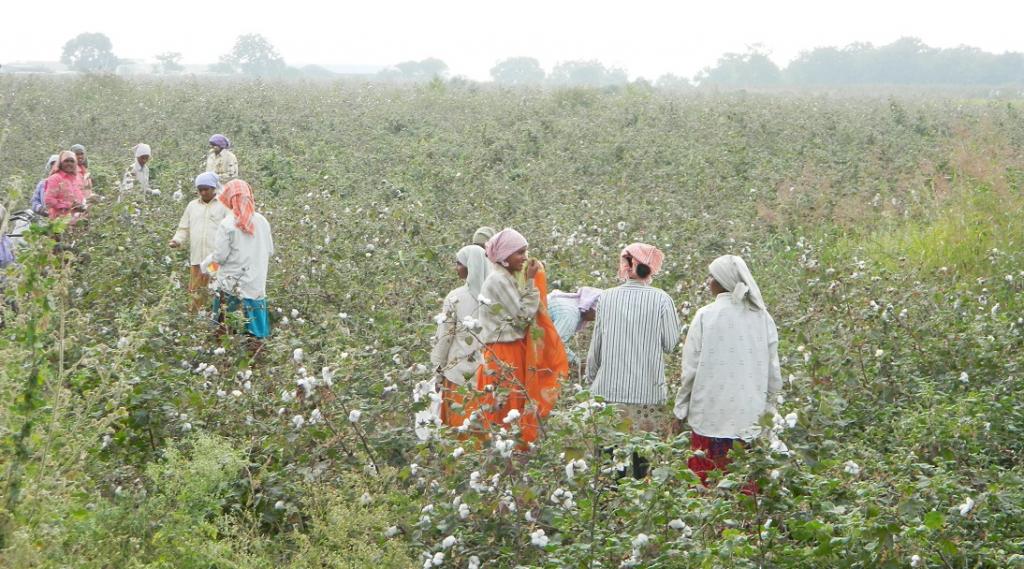 Ramesh Kannauj, a farmer in Talanpur village in Dhar district of Madhya Pradesh, discusses the benefits of using organic pesticides to minimise pest attacks on the cotton crop with a group of farmers.

Having used and seen the benefits of using organic pesticides, Ramesh engages with fellow farmers to encourage their adoption. Dhar is a major cotton growing district of Madhya Pradesh.

Heavy monsoon rains in the months of August and September have increased the incidence of pest attacks across the state including Dhar, impacting crops and reducing their productivity.

Uncertainty in rainfall patterns is a common scenario across the Malwa region of Central India. In 2019, the region saw almost double the normal rainfall in the months of August and September, which threatened the entire cotton crop.

The Kukshi block, where Haldi village is located, has an average annual rainfall of 870 millimetres (mm). However, seven out of the last 12 years has seen less than average rainfall.

With more than two-thirds of the area under rain-fed irrigation, this is a critical risk for the farmers — more than 80 per cent of whom belong to the small and marginal category having limited resources to recover from crisis situations.

Munni Bai, a farmer in Haldi village while speaking of the changes in climate, said: “It is important for us to look at solutions and actions that help us cope with such changes. When we sow our kharif crop in June, we are not sure how the weather patterns will behave and we are trying to address the scenario as it develops over the entire cropping season.”

Cotton is an input intensive crop that uses large amounts of water, fertilisers and pesticides. This leads to increased cultivation costs. It is therefore important to look at a package of practices that not only lowers the cost of cultivation through the use of cheaper inputs, but also enables a lower environmental footprint.

The option of using organic pesticides against chemical pesticides on the one hand helps in reducing the negative impact on soil and water and on the other hand,  reduces the cost of cultivation.

Chandan Panday, working with Udyansh Gramin Samaj Samiti, a non-profit working in Kukshi block, said: “As a result of the COVID 19-led lockdown, sales representatives of private pesticide companies were not allowed to travel to the villages. At a time when the cotton crop was facing pest attacks, farmers had to rely and use organic pesticides to address them.”

While these are efforts to enhance the livelihood and income of farmers, another action by women in the Bundelkhand region of Madhya Pradesh and Uttar Pradesh is to make local villages water secure.

In the past decade, these Jal Sahelis (Water Patrons) have played a pivotal role in ensuring water availability by repairing hand pumps, fixing wells and creating village water security plans for safeguarding water resources in their villages. They have been supported by the Parmarth Samaj Sevi Sansthan, an organisation in Jalaun, Uttar Pradesh.

Behind the origin of this women-led, community-based organisation, lies the story of severe drought and drastically impacted livelihoods, that forced women to take on the mantle of water resource management in their villages.

The initiatives listed above are only a few among many others, where people have taken the onus of making a positive impact — galvanising the social capital to make a lasting change on the environment, the household and the village economy.

As people join hands to increase awareness on climate change and call for action to reduce its impacts, we need to vouch for local solutions that are simple, cost effective and allow communities to engage and deliver.

This will help strengthen the village economy and promote sustainable production and consumption behaviour. Only then will we be able to realise the dream of making our society and people self-reliant.