High ambition coalition! Are you joking?

Chandra Bhushan explains why by no stretch of imagination can any one call the past, present and future climate actions of the US and the EU (members of this coalition) as 'high ambition' 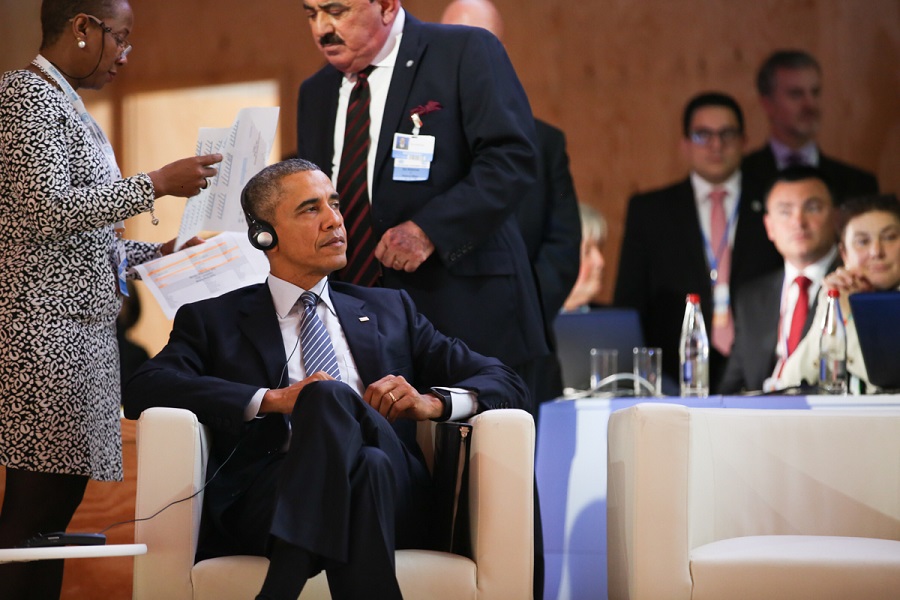 As I had predicted, the United States has played dirty politics at the Paris climate conference. As we move into the last three days of negotiations, a coalition representing more than 100 countries, named "the high ambition coalition" has suddenly emerged. It was purportedly formed in high secrecy (pure cloak-and-dagger stuff) over the last six months. The existence of the coalition was grandiosely announced by the US Secretary of State John F Kerry in his "Remarks on COP 21 and Action Beyond Paris", on December 9.

The high-ambition coalition consists of the US, the EU member states and 79 African, Caribbean and Pacific countries. As reported in the Guardian, the coalition wants an agreement at Paris to be legally binding; to set a clear long-term goal on global warming that is in line with scientific advice; to introduce a mechanism for reviewing countries' emissions commitments every five years; and create a unified system for tracking countries' progress on meeting their carbon goals.

So far as I am concerned, all the above goals are reasonable. Yet, they are highly inadequate. My problem is not the goals this coalition aspires to, but the hypocrisy they exhibit in calling themselves a "high ambition coalition".

They, in fact, represent the lowest minimum denominator. On the one hand, you have the US and the EU member states, who are not interested in fast and massive reductions in their own emissions, domestically. They have made very weak emissions reduction pledges and are also interested in offsets in the developing countries to meet their targets. The consumption-based emissions of these countries have only grown over the years and are not down. They have simply outsourced their pollution to developing countries and want to continue doing so in the future. They continue to invest in fossil fuels, including coal and massively in gas. In fact, the US today produces more gas than Russia and more oil than Saudi Arabia. Its coal production is second only to China and 30 per cent more than India. Germany, the paragon of climate piety at the Paris climate conference, is building new coal power plants but lectures India not to do so.

By no stretch of imagination can any one call the past, present and future climate actions of the US and the EU as "high ambition".

Then there are the 79 African, Caribbean and Pacific countries (I am surprised that they have left Bangladesh and Maldives out of this group). These countries have successfully sold the narrative that they are the only ones vulnerable to the impacts of climate change. But the fact is poor people across the world are vulnerable to climate change. China and India collectively have more poor people than in the rest of the world. Moreover, all countries are experiencing extreme weather events.

These countries want the long-term climate goal to be 1.5 degrees and want finance for adaptation and loss and damage. These countries have very few obligations to act on climate change. They have huge flexibility. They can plan, measure, report and verify their climate actions at their own discretion. They are under no pressure (at least, as of now). They have been promised extra dollars and they are in a "sweet spot".

So, you actually have a coalition that has developed countries who want to shift the burden of solving climate change to others and a set of 79 countries that have no serious obligations. And they call themselves the "high ambition coalition". This must be the joke of the century.

But there is trouble in this paradise.

The group of 79 developing countries also wants a legally binding agreement. This is where things get complicated.

The US has told the world that it does not want Intended Nationally Determined Contributions (INDCs) to be legally binding. Developed countries also do not want any legal obligations on their financial pledge. In fact, US' Special Envoy for Climate Change Todd Stern has told the US senate that he does not expect the Paris agreement to be ratified by the Senate. In such a situation, the US agreeing on a legally binding agreement is an act of pulling the wool over everyone’s eyes, including and especially those of the members of its own new-found coalition.

Then there is the politics of the 1.5oC-temperature target. The US and the EU countries have enthusiastically supported the 1.5oC-target because they do not want 'liability’'and 'compensation' to be part of the loss and damage mechanism. They want the loss and damage mechanism to be weak. As Erich Pica, president of Friends of the Earth, US, said in a press briefing on December 9, "We (the US) are going to eliminate liability and we are going to eliminate compensation. What good is loss and damage once it has been removed?"

It is the loss and damage element that is going to be too expensive, in the future. Extreme weather events are already causing billions of dollars of damages across the world and the developed countries don’t want to be held liable for this. And yet, these 79 countries that are facing and will face loss and damage have signed up with the most strident objectors to the mechanism. I have a request for these 79 countries: please recognise, coalition partners of the countries that created the problem in the first place, that you are mortgaging your future for the sake of an unattainable 1.5oC target.

It is clear to everyone who has read the IPCC AR5 that we have missed the bus for 1.5oC. Even 2oC is going to be extremely difficult. The current trajectory is towards 3-3.5 oC.

In this context, if this so-called "high ambition coalition" is really serious about the 1.5oC temperature goal, it should immediately, unilaterally, and unambiguously announce that Annex 1 countries will reach net zero emissions by 2025. They should also announce that Annex 1 countries will willingly put in a few hundreds of billions of dollars of public money for mitigation and adaptation in developing countries.

Else, this coalition is fooling itself. It is most welcome to do so. More seriously, they are fooling the rest of the world.