The latest IPCC report confirms that we can no longer lose time in prevarication or in finding new excuses not to act, including empty promises of net zero by 2050 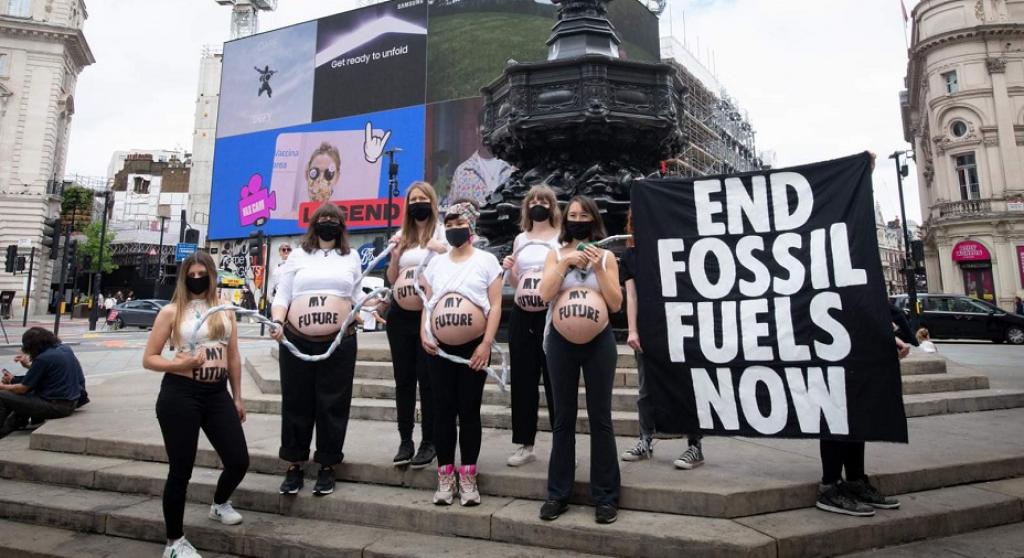 Six pregnant women bare their baby bumps in London on August 1, 2021, demanding an end to fossil fuels and a future for their unborn children. Photo: Gareth Morris for Extinction Rebellion @XRphotos / Twitter

There are no ‘maybes’ any more. The threat of climate change is real; dangers are imminent and the future is catastrophic. This message from the report of the Intergovernmental Panel on Climate Change (IPCC) confirms what we already know and can see in the world around us — from wildfires because of extreme heat and moisture loss; to devastating floods because of extreme rain events and tropical cyclones because of the changing temperatures between the sea and land surface.

The future is here and it should worry us enormously. Indeed, this report, coming as it is from the normally conventional and conformist world of buttoned-up scientists, should scare us into action — real and meaningful.

There are key takeaways from the report. One, it is now clear that the world may be hurtling towards 1.5 degrees Celsius temperature rise by 2040.  Meaning, the guard rail of what is relatively safe could be breached in the next two decades itself.

Given that we are already seeing huge wide-scale devastation with current temperature rise of only 1.09oC from the 1880s — Industrial Revolution times — we need to understand just how dire and urgent this call from science is.

Two, scientists at IPCC are no longer coy about telling us clearly that climate change is caused by human activities. In fact, they go as far as to ‘attribute’ climate change to specific extreme weather impacts.

This is important because till now we have only been able to understand climate change impacts in terms of the increased frequency of such events in the world. But now, we know with greater certainty the role of climate change in, say, the extreme heat event in Canada or wildfire in Greece or the floods in Germany. No more ifs or buts.

The question is if we are listening. If action is being taken at the scale and pace needed. This is still not happening.

And this is where the third big highlight of the IPCC report must be understood. Science is telling us that the relative efficiency of sinks — the earth’s natural cleaning system, the oceans, forests and soils, will go down in the coming years as emissions continue to rise.

Currently, oceans, land and forests together absorb some 50 per cent of the emissions that we release into the atmosphere each year. In other words, without these sinks, we would have already breached the 1.5oC warming by now.

But what this report also tells us is that we cannot ‘bank’ on the sinks to clean up the emissions in the future at this same rate. This means the ‘net zero’ plans of countries will have to be revisited.

Under the net zero plan, countries like the United States (by 2050) and China (by 2060) have declared that their emissions will remain below what their terrestrial sinks or carbon capture technologies will be able to clean up.

Now, if we take on board what the IPCC is saying, then the sinks have reached their tipping points — and countries will have to work even harder to plant more trees to even sequester carbon dioxide (CO2), forget adding to the sinks to do more.

Therefore, this report from global scientists must be a wake-up call. We can no longer lose time in prevarication or in finding new excuses not to act —including empty promises of net zero by 2050. It is time we got serious and started meaningful action on the ground — today.

The good news is that technologies are available to disrupt the current fossil fuel-driven industrial system. We do not have to wait for disruptive technologies. Instead we have to be disruptive in action. The problem is that even today, the action on ground is too little and too late.

In fact, greenhouse gas (GHG) emissions will rise as economies, hit by the novel coronavirus disease (COVID-19) pandemic, rush to get back to the normal. Every country is desperate for recovery and this means doing all that can be done with the current brown economy — including using coal and gas and oil and domestic manufacturing — to ratchet up growth as fast as possible.

The science is also clear. The world needs to reduce GHG emissions by 45-50 per cent below the 2010 level by 2030 and reach net zero by 2050. In other words, we need transformational action and not some itsy-bitsy stuff of new cars to e-vehicles by 2030, or stopping coal but then moving on to natural gas — which is also fossil fuel. We need hard and drastic action.

This is where the scientists, being scientists, cannot call out the most inconvenient of inconvenient truths. There is no doubt that top contributors to climate change are a handful of countries — the US and China, put together, add up to roughly half the world’s annual emissions.

If you add up emissions from 1870 to 2019, then US, EU-27, Russia, the UK, Japan and China contribute 60 per cent of the global carbon dioxide budget. Now, the IPCC has told us that this budget itself is even more limited. So, consider the sheer inequity. But also consider where there is need for action.

If you take even the Paris targets, the nationally determined contributions (NDCs) of these countries, then in 2030, they will increase their share of the budget to 68 per cent, not decrease it as needed and provide space for the rest of the world to grow.

This is because their targets are abysmally low and disproportionate to the contribution to the problem and that China will increase its share of CO2 emissions — going from 10 gigatonne of carbon dioxide equivalent (Gt/CO2) to 12 Gt/CO2 annually in the coming decade.

This is where we need to discuss India. We would like to sit on the high-table of polluters — and technically, India is the third-highest annual polluter of CO2 in the world (fourth if you take EU-27 as a group). But the scale of our contribution is so insignificant that it cannot be compared.

Between 1870 to 2019, India’s share of the global CO2 budget is some three per cent. While China emits some 10 Gt/CO2 and the US 5Gt/CO2; India emits some 2.6 Gt/CO2 annually. And even if you take India’s business-as-usual scenario, we will still emit less than what the US emits today, or one-third of China at 2030.

But this is not to say that India must not act. In fact, it is in our best interest to take steps to combat climate change — at speed and at scale. First, we are already seeing the worst impacts of climate change hit our people — from extreme rain, cloud bursts, floods and temperature rise.

Second, we can act because we have tremendous opportunity to reinvent the way we do things — from the way we practice mobility in our cities and the way we build houses with thermal comfort to the way we provide access to affordable energy to the poor in the country.

For us, action on climate change comes out of self-interest and co-benefits — reducing local air pollution and in this way, also cutting back on GHG emissions.

And, I have to say this clearly: We are not walking the talk on this. The Indian government is sanguine about doing more than other countries in terms of comparable action to reduce CO2 emissions.

But the fact is we have no measurable targets to reduce emissions and this is why, we are doing well — our NDC is to reduce not absolute emissions but the emission intensity of our economy. In this way, we cannot and must not boast of our climate change action.

We can only say we are doing as little as we need in terms of our responsibility or contribution to CO2 emissions in the atmosphere, which demands very little from us. In these climate-risked times, when science has a tough and uncompromised message, this is just not good enough.

The fact is that climate change demands effective global leadership. And one thing that we also know from our pathetic track record in delivering vaccines to all in the world is that global leadership is at its lowest point in human history — at least in our lifetime.

Climate change is yet one more global crisis that needs a global response — we cannot win this without cooperation of all and this needs climate justice for all.

But as with the war we are losing to the virus and the variants, climate change is also a great leveler — today, not only the poor are hit by extreme weather events but also the rich. So, we need to act. And act fast and together. Science has spoken. Now action must follow.