Is India on track to meet its Paris commitments

India’s greenhouse gas (GHG) emissions accounted for 6.5 per cent of 2014 global total, according to data from the World Resources Institute. This made the country the fourth-largest emitter after China, the United States and the European Union.

Per capita, India’s emission from fossil fuels (in 2017) is by far the lowest among major economies:

Despite its low per capita emissions, India has made significant commitments in its Intended Nationally Determined Contribution (NDC) submitted to the United Nations Framework Convention on Climate Change (UNFCCC) in 2015 as part of the Paris Agreement.

The Climate Action Tracker website has rated its climate efforts as “2-degree compatible” — that can contribute to limiting warming by the end of the century to 2° Celsius; making India the only major economy to be so highly rated. 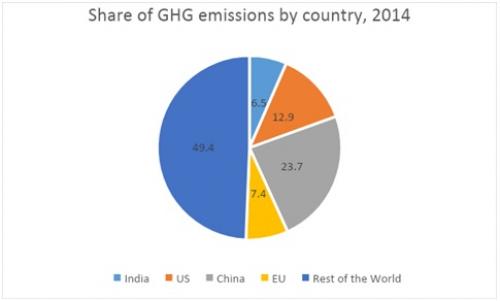 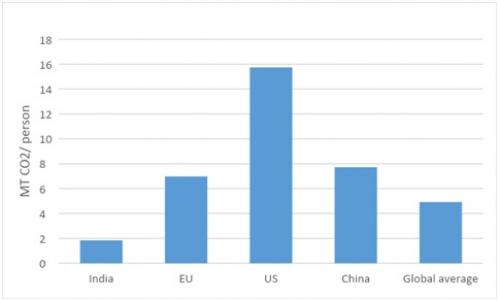 India’s headline Paris pledge was to reduce the emission intensity of its gross domestic product (GHG emissions per unit GDP) by 33-35 per cent over 2005 levels by 2030.

This data (in conjunction with World Bank data for GDP) shows an unwelcome trend: A decrease in the rate of reduction of emission intensity during 2010-14 from 2007-10, as emissions continued to grow unabated despite a weakening of economic growth.

More recent unofficial estimates indicate that this trend may have been temporary.

India’s annual GDP growth was only about 1 percentage point slower than the average in the years before, emission growth rate nearly halved, from 4.8 per cent before 2015 to 2.3 per cent in 2015 and 2.9 per cent in 2016 and 2017, according to the 2018 edition of the Trends in Global CO2 and Total Greenhouse Gas Emissions report by the PBL Netherlands Environmental Assessment Agency. These fluctuations point to the perils of the assumption that the decoupling of economic growth from emissions is a straightforward process.

In its second Biennial Update Report submitted to the UNFCCC in 2019, India claimed to have reduced the emission intensity of its economy by 21 per cent by 2014. But it didn’t specify emissions data for 2005 or the GDP data series used to arrive at the conclusion.

A study by Navroz Dubash and others published last year in Environmental Research Letters analysed seven previously published energy / emission scenarios together with current policies, and similarly argued that India’s economy-emission trajectory was consistent with the Paris Agreement.

This is not just due to, say, an increasing usage of renewable energy or energy efficiency, but also due to the change in the sectoral composition of the economy as it shifts from industry to (often less energy-intensive) services.

There is little clarity as to the extent to which the claimed 21 per cent reduction between 2005 and 2014 is due to concerted climate action. For comparison, in its own NDC, China claimed to have reduced the CO2 emission intensity of its GDP by 33.8 per cent during the same period.

In addition, India’s NDC also committed to ensuring that 40 per cent of its installed power capacity is from non-fossil sources (renewables, hydroelectric and nuclear) by 2030. There si an interim target of 175 gigawatt of non-hydel renewable power by 2022 (up from 35 GW in 2015).

Non-fossil sources accounted for about 37 per cent of India’s power capacity, as of September 2019, according to the Central Electricity Authority (CEA). Thus, the larger 2030 target seems like an easy one to achieve.

Indeed the CEA’s projections yield an installed non-fossil capacity equivalent to nearly 65 per cent of the total capacity by 2029-30.

However, on the interim target of 175 GW of non-hydro renewables by 2022, despite strong initial progress, the government’s plans appear to be floundering.

A recent CRISIL report indicated that India may fall short of this interim target by as high as 42 per cent. If at all the target can be met, it will require more concerted effort by the government and the private sector.

India’s final key pledge at Paris was the creation of an additional carbon sink equivalent to 2.5-3 billion tone CO2 by 2030 through additional forest and tree cover. Analysts agreed that progress on the forestry goal was far from robust.

The Green India Mission, which seeks to work towards the target is woefully underfunded and has been regularly missing its annual targets. This has rendered the fulfillment of the 2030 pledge hard if not altogether unlikely.

Thus India is making reasonable progress on two of the three key pledges it made in Paris. The government needs to correct course where its policy is faltering. It also needs to invest in generating data more regularly than the bare minimum required by the UNFCCC so that way claims can be validated and data analysed to understand the underlying trends.