On road to resilience 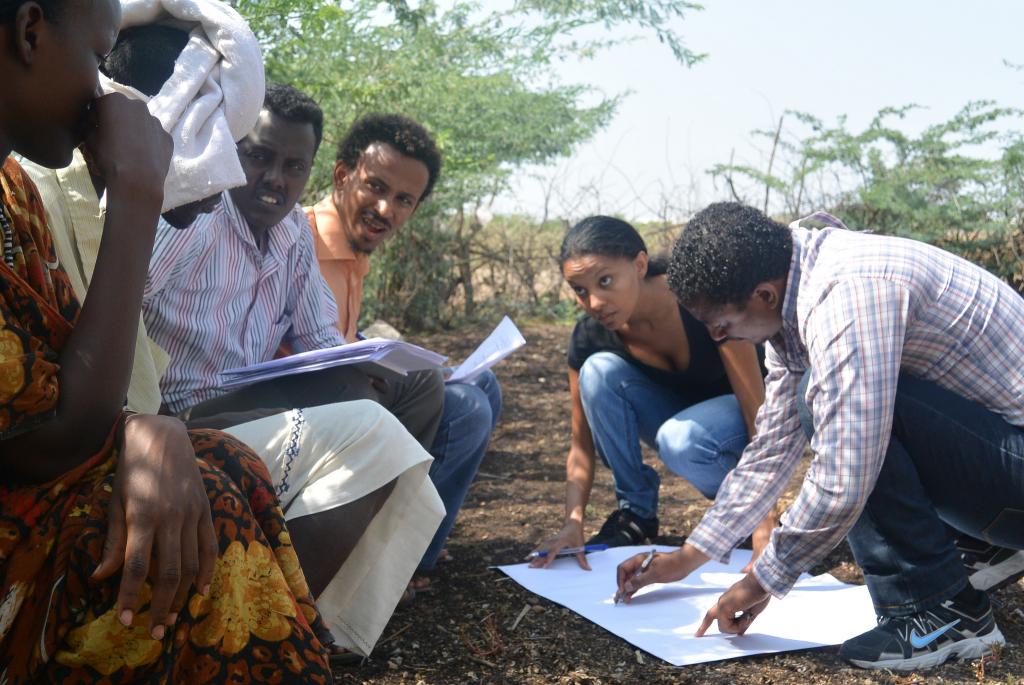 Resilience is a departure from the concept of sustainability that wants to preserve what is there or sometimes what has been temporarily created—and as such it is often conservative by character. Yet, development is a lifelong project: nature and culture are always changing and there is no cut-off date by which all is secured against all that comes after. It is here that resilience comes in—working with existing systems and making them more robust, fair and productive to provide inclusive services and reduce the vulnerability of those who live by them. What are these existing systems? They are the norms and values we live by, the communities and networks we are part of, the landscapes that support us and the government that we deem legitimate.

Coping with climate change impacts or facilitating social development also calls for making existing resources more productive and focussing on the ability of the communities to self-evolve and be better prepared to convert problems into opportunities. Ethiopia’s approach towards water harvesting or the efforts of few hundred women in India to run a joint economic activity point to this need of resilience.

Let’s begin with the example of the North Bengal Women’s Federation in India. This federation had a humble beginning in 1998 on the strength of 30 women groups with 25 members each, organised and supported by a rural development project. Each women group had to save money for several months, after which the collective saving would be doubled by the project and support would be provided to start a joint economic activity. Though this programme was popular and caused the initiation of some interesting joint economic activities, the arrangement was judged not to be sustainable, as it depended very much on the incentive of the doubled savings.

A new course of action was taken whereby financial bonus would no longer be provided. In spite of this, interest among women to create groups didn’t fizzle out for two important reasons: to be united and strong enough in undertaking an economic activity and to form a joint front in case of domestic abuse. To form a group an aspiring group would visit an existing group, take lessons from it and develop their own group. The enthusiasm ran high. Later, federations were formed at district level with regular meetings and exchanges between groups, all with funding from the groups themselves. In four years, 300 groups come into being with an average membership of 25 women with almost no external facilitation.

The women’s federation now—15 years later—counts 600 groups with an average of 15 members each and is a hallmark of a self-evolving and resilient organisation. The woman, who was the initial (and only) project facilitator, is now employed by the federation and works as the secretary. The federation is a main conduit and interface for development programmes in the region, be it on functional literacy, rural banking or agricultural development.

The success of the North Bengal Women’s Federation was partly because of the reliance on strong norms and values, and the solidarity and ability to do well, rather than being dependent on temporary incentives, in this case a doubling of savings. The federation is driven by pride and compassion—something sorely missed in most development work that relies on complex cost contribution arrangements rather than norms and values. The second success factor was the reliance on communities to self-organise and self-evolve. The women groups organised themselves and were inspired by the federation and annual conventions where they would meet, learn, compare and cooperate. Compare this with the reliance on external social mobilisation that has unfortunately become a strong feature of ‘community development’ with social organisers holding village meetings, making visions and plans on flip charts and creating their own dependent constituencies. The image that comes to the mind is that of many signposts of NGOs, all competing for attention. That is dependency and not resilience.

The second example comes from the Global Resilience Partnership (GRP) and concerns the programme to systematically convert roads into more than just transport corridors and make them instruments of climate resilience and improved water management. The programme started in 2014 in Ethiopia after a research project identified opportunities to use roads for harvesting water.  The point of departure was that the construction of roads is the single major intervention on the surface hydrology and landscapes. Roads often block the flow of water and the latter gets concentrated in a limited number of places. During heavy rainfall, some roads become like drains carrying water downstream.

This unfortunate practice brings widespread negative impacts: erosion along roads, devastating local floods and water-logging caused by road drainage. Several studies on roads established that a 10-km-long stretch has between eight and 25 problem spots. In Ethiopia, for instance, the lifespan of the Grand Renaissance Dam could be severely shortened by the sedimentation triggered by road construction (and the massive erosion that comes with it) in the upper catchment of the dam.

However, these problems can be turned around by systematically managing water along the roads and turning a problem into an asset. The surface run-off along roads in dry areas can be used to fill storage ponds, recharge groundwater and irrigate land and pastures. In other areas, roads can be used to manage water levels in coastal areas, serve as flood shelters, control sand dune movement or influence fish movement.

Managing water with roads is also a superior approach than the current thinking on making roads more climate-resilient by making specification even heavier and more weather-proof but also unaffordable. When the idea of road water harvesting was first introduced in Tigray, Ethiopia, the uptake by the different government departments was enormous.  It was immediately incorporated in the intensive watershed programmes whereby landscapes were covered with mass-mobilisation campaigns and safety net programmes. From there, the road water harvesting activities spread to three more large regions in Ethiopia—improving water availability for an estimated one million people in the 2016 campaigns. Support from the GRP came in the form of documentation, motivational training to implementing organisations, monitoring and preparing guidelines with the Ethiopian Roads Authority and building a learning alliance.

The programme was implemented at scale immediately through an effective and legitimate government. While the implementation of programmes in so many places made it hard to keep track of them, but they unleashed enormous creativity in finding local solutions. In fact, the entire water harvesting programme in Tigray, Amhara and other parts of Ethiopia has been successful in transforming degraded landscapes into productive water holding assets and making them more resilient.

Up to 2005, watershed programme had a strong focus on sustainability but was inherently also very conservative—focussing on soil conservation and erosion control. Although the land degradation problems did not get worse, it also did not get better either. Over the years, the approach changed and water harvesting was added to the programme with a myriad of new or modified techniques (contour bunds, bench terraces, eyebrows, infiltration trench, and storage and recharge ponds). This started to make a huge difference. Not only was soil erosion reduced but water was harvested and kept available.

Due to the massive watershed programmes, groundwater tables started to increase and it became possible to develop shallow wells, where there had never been groundwater before. The landscapes were not just preserved but they were improved and formed the basis for more prosperity and resilience against shocks. The big test was the El Nino year of 2015, which was saw a more severe drought than the epic famine in 1984. This time, there was no political conflict as in 1984, but more importantly, the Tigray landscapes had been transformed and one of the worst droughts on record passed without a human casualty.

The intensive watershed activities in Amhara and Tigray have had another effect. The retention of water in the landscape and the overall re-greening changed the micro-climate. There is better soil moisture, ensuring water to crops and more natural nitrogen fixation because the soil biota is more active. With better soil moisture, soil and air temperatures are also regulated, leading to better germination of crops. Moreover, the overall re-greening reduced desiccating and eroding effect of wind and is producing more local rainfall. This entire chain of effects is leading to more resilient and productive micro-climates.

This presents a new angle to coping with climate change. At present there are two main climate change strategies: mitigation and adaptation. But we believe there is a third and probably equally strong strategy—systematically improving the micro-climate at landscape level.  The strength of this third strategy is that it can be taken up locally. It is not dependent on global processes but creates local wins. It will ensure that local areas are less affected by global change and at the same increasing the productivity and resilience.

The article is co-authored by Kifle Wolderegay and Rajeshwar Mishra