Environment Minister said that India would start preparing for Paris Agreement implementation from 2017, but the budget did not see a boost for climate change 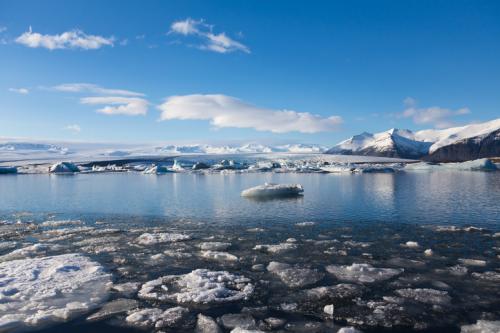 The United Nations Framework Convention on Climate Change (UNFCCC) defines “climate change” as a change in climate attributed directly or indirectly to human activity that alters the composition of global atmosphere. It is observed over comparable time periods in addition to natural climate variability.

The major characteristics of climate change include rise in average global temperature, ice cap melting, changes in precipitation, increase in ocean temperature leading to sea level rise. The efforts needed to address climate change include mitigating greenhouse gas (GHG) emissions on one hand, and building adaptive capacities on the other. India is committed to the UNFCCC and the Kyoto Protocol, which represent international consensus on the ways to deal with climate change.

India has a comprehensive framework of legal and institutional mechanisms to respond to environmental challenges. It has initiated several climate-friendly measures, particularly in the area of renewable energy (Vipin Chandran & Sandhya, Adaptation and mitigation strategies of climate change, Yojana July1,2013). India inked Paris deal on October 2, 2016—a landmark pact which calls on countries to combat climate change and limit global temperature rise to well below 2 degrees Celsius.

The Paris climate conference brought into sharp focus the hazards of runaway climate change. India announced its new climate plan, also known as its Intended Nationally Determined Contribution (INDC). It is the world’s third-largest emitter of GHGs—the share stands at around 4 per cent—and is highly vulnerable to impacts of climate change.

India is committed to invest in tackling climate change while addressing poverty, food security and access to healthcare and education. India’s INDC targets on its goal of installing 175 gigawatts (GW) of renewable energy capacity by 2022, out of this, 100 GW has been allocated to solar and 60 GW to wind. It has set a new target to increase its share of non-fossil fuel-based energy from 30 per cent today to about 40 percent by 2030 and committed to reduce its emissions intensity per unit GDP by 33 to 35 per cent below 2005 by 2030 and create an additional carbon sink of 2.5 to 3 billion tonnes of CO2 through additional tree cover. India’s The action plan also prioritises efforts to build resilience to climate change impacts, and gives a broad indication of the amount of financing necessary to reach its goals.

Under India’s Constitution, climate action is the mandate of states and union territories. Around 29 states have developed action plans on climate change (SAPCCs) under the National Action Plan on Climate Change. With new national goals on climate change as per INDC, the SAPCCs would need to refit to address the new commitments.

India’s plan to reach the INDC needs to be strongly gender-equitable and community based. The need for gender mainstreaming in climate action plans is vital for inclusive sustainable development and climate mitigation. Community-based adaptation approach must also be the first line of action for integration of adaptation in policies and planning (Mishra, Why gender justice is crucial, Global Policy Journal).

The way to improve mitigation and adaptation is to optimise resources. As it moves into the implementation phase for meeting commitments, tied up funds have to be released in the budget. India needs to strongly push for Climate Technology Centre and Network (CTCN) in order to have improved capacity that would help in generating good adaptation action plans and proposals. It is important to rapidly scale-up ambition which has been lagging (SAA Farhan, What’s on in India’s Agenda, Development Alternatives).

According to the latest BP Energy Outlook, India’s demand for green energy is expected to grow by 7 times in 2035, which means the share of renewable energy in the country’s fuel mix will increase from 2 per cent to 8 per cent in 2035. However, coal and other fossil fuels will continue to play a major role in India’s energy mix in the decades to come. India’s emissions intensity (CO2 emissions per unit of GDP) declined by approximately 18 per cent between 1990 and 2005, and the country has already committed to reduce it by another 20-25 per cent from 2005 levels, by 2020. The new INDC target commits India to go further—33 to 35 per cent by 2030. The country’s emission intensity target does not reflect the scale of mitigation that would result from its planned investments in renewables.

But renewable energy isn't the only climate-related sector primed for growth. Like any disruptive force, climate change is creating opportunities for private companies willing to innovate. Apart from national governments, companies can find opportunities in eco-friendly construction and in helping cities prepare for changes in climate. By 2050, more than 6 billion people of the world will live in urban areas, creating a pressing need for a host of infrastructure services, like water and sanitation. Around, 400 million homes are expected to be built by 2020, a potential boon for construction companies that can incorporate green technology into their builds. There are great opportunities in climate-smart financial solutions (Dimitris , Capital Finance magazine, IFC, January 6, 2016).

India’s INDC recognises the importance of aggressively restoring forest cover, in a manner consistent with supporting livelihoods. Creating an additional carbon sink of 2.5 to 3 billion tonnes of CO2 would require average annual carbon sequestration to increase by at least 14 per cent over the next 15 years relative to the 2008-2013 period. That is a tall order. Apart from  Green India Mission—expected to deliver 50-60 per cent—it remains to be seen how India will achieve the rest. Moreover, INDC lacks of clarity on emissions intensity in the base year (2005) and target year (2030), as well as the scope and coverage of the intensity target and the methodologies for measuring it. This information is crucial for monitoring progress towards India’s target and for understanding how it contributes to the global goal of limiting temperature rise to 2 degrees C. As a country exceptionally vulnerable to climate change, there is heavy focus on adaptation and resilience in India’s INDC. INDC emphasise investment in these activities would require additional support through domestic and international funds. It is estimated that the country would need US $206 billion during 2015-2030, with additional investments needed for disaster management (5 Key Takeaways from India’s New Climate Plan by Apurba Mitra, et al, World Resource Institute- October 05, 2015).

It is reported that the accelerated warming of the Arctic and the Antarctic could trigger catastrophic climate changes and the world has recently received dire warnings about the deteriorating health of our planet from two of its most fragile and critical ecosystems.

Artic Resilience report recently warned that the accelerated warming of Artic could trigger “tipping points which in turn lead to “catastrophic and uncontrollable climate changes” (Stop before the tipping point, Hindustan Times, January 12, 2017).

For India that has extensive coastline, the implications are enormous. The Union Environment Minister announced in December 2016 that India would start preparing for implementing the Paris Agreement from 2017. However, there is no major boost for climate change in Union budget 2017-18. The ministry seems confident to spend large sums in preparing to implement the Paris Agreement that comes into force from 2020.