Promise me the monsoon

Has weird weather become the new definition of normal?

Why this weird weather? Why have western disturbances—the extra-tropical storms that originate in the Mediterranean and Atlantic seas—been lashing us again and again, with devastating impacts on agriculture? Is this normal? Or has weird weather become the new definition of normal?

The India Meteorological Department says the severe and unseasonal rain this year has been because of the confluence of western disturbances with the easterlies from the Bay of Bengal which is normal. But what they cannot explain is why the frequency of the western disturbances has increased and why the impact of this confluence is being felt all the way up to central India which is unusual and definitely not normal. 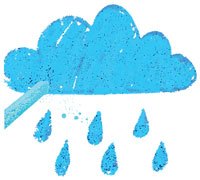 Indian scientists are extremely cautious about using the CC—climate change—word. But it is now widely recognised that warming is making the world’s weather more unstable and extreme. How much is the question. Scientists would agree on saying that although no single extreme weather event could be attributed to climate change, the increased frequency and intensity of such events is definitely because of human-made climate change. Now, this science is becoming more exact. A recent paper published in Nature Climate Change finds that the observed average global warming of 0.85°C is responsible for 75 per cent of the daily heat extremes and 18 per cent of the precipitation extremes. More worrying is the conclusion that as the temperature increases to 2°C—which is likely, given the lack of global effort in cutting greenhouse gas emissions—40 per cent of the rainfall extremes will be linked to human-made climate change.

This is when we know that the subcontinent’s weather pattern and, in particular, the monsoon is not only this country’s real finance minister, but truly the most globalised Indian, with connections from all across the globe. It is deeply connected to ocean currents and winds from the Pacific, the Arctic and the neighbouring Tibetan Plateau. The monsoon is also the most understudied and least understood of all weather phenomena. Now climate change is making it even more difficult to read.

Many theories point to changes now discernible. R Krishnan of the Pune-based Indian Institute of Tropical Meteorology says pronounced warming over the Tibetan Plateau has increased the instability of Westerlies. This would explain the increased variability of western disturbances. Another theory links these disturbances to the growing instability of the jet stream—strong winds that blow from west to east and separate the cold arctic mass from warm sub-tropical air. This is linked to the warming of the Arctic.

What is most worrisome, indeed frightening, is the prospect that climate change could have long-term impact on the monsoon. We know that the monsoon—this huge movement of water from over the oceans to the Indian landmass—happens because of the temperature difference between the ocean and the land. The land is warmer and the ocean cooler. Now there is some research to show that this contrast could be weakening. The Indian landmass is showing signs of suppressed warming—it is not clear why—and the Indian Ocean is showing signs of enhanced warming. If this continues then the land would not pull water-laden winds from the oceans as strongly as before. The Indian monsoon would be weaker. But this is also combined with the fact that warming climate means that the atmosphere can hold more moisture and this would mean more extreme rain. So, it is not clear if it will rain less or more.

All this points to catastrophic changes in the future. One thing is clear: we cannot continue to deny these long-term changes, which will have potentially catastrophic impacts on our economy and agriculture. It is because we refuse to accept (at least publicly) that anything strange is afoot that we are not putting into place systems that would improve our ability to cope with variable and extreme weather.

All this is also linked to the inconvenient fact that scientists who study the weather or the monsoon are treated with contempt or neglect in the establishment of science. Just think if you can even name a monsoon scientist. Just think if government has ever recognised a monsoon scientist. You will find that the answer is no. Instead what will spring to your mind when you think of Indian science are the macho scientists who have taken us to space or worked on nuclear science. All this may be important but it is time we recognised that the icons of today’s science have to be different. Those who make us see the future are those who will make us understand the monsoon. This is what will determine our survival.

Signals of the change in monsoonal precipitation at around 2,000 years BP in a sediment core off central west coast of India