It may be difficult to have a planet that no longer uses oil or coal, does not kill millions of farmed animals, degrade wetlands and rivers 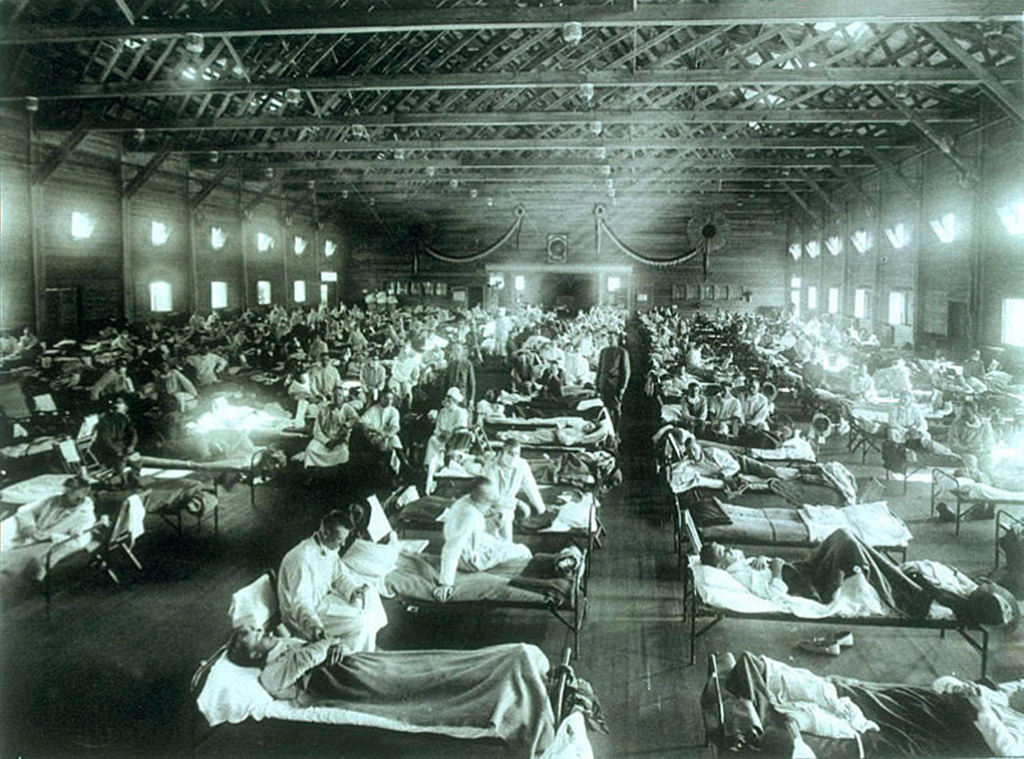 A century after the Spanish flu, the COVID-19 pandemic has shaken the confidence of humanity. Photo: Wikimedia Commons

History of viruses tells us that approximately 5,000 years ago, a major pandemic wiped out pre-historic habitation at Hamin Mangha in China.  Plague repeatedly haunted the humanity from Byzantine era till the 18th century. Then, in the 20th century, we were hit by the Spanish flu.

Yet, it is intriguing how another pandemic, the novel coronavirus disease (COVID-19), has completely shaken the confidence of the modern Homo Sapiens that defeated the Naenderthals or Denisovans and are now equipped with genetics, supercomputers and internet. Inger Andersen, the United Nations environment chief, has called it a “clear warning shot” by nature.

The conspiracy theory that SARS-CoV-2 was engineered in a virology laboratory of Wuhan in China was strongly contested by a group of eminent scientists in the esteemed medical journal Lancet. Phylogenetic network analysis suggests that it was zoonotic (of animal origin) and could originate from bats, but that its bat to human transmission route was unclear.

Intergovernmental Science-Policy Platform on Biodiversity and Ecosystem Services (IPBES) reported that nearly 700,000 annual human casualties are zoonotic. Nearly two million unidentified viruses still exist in the animal world and any of them can be as lethal as SARS-CoV-2, if transmitted.

For example, humans contracted human immunodeficiency virus by killing and consuming the meat of chimpanzees, who contracted it from monkeys. In fact, Oxford Jenner Institute’s ChAdOx1 vaccine is derived from chimpanzees and is genetically modified.

Notwithstanding the rebuttal against the conspiracy theory, a strong possibility exists that SARS-CoV-2 had connection with some wet markets in China or south Asia where rare wild animals are killed for human consumption.  Although post-COVID-19 China officially declared a ban on wild life trade, a seven-billion dollar industry will continue to thrive for it provides jobs to millions.

Huge animal farms that use excessive antibiotics and promote low genetic diversity can be dangerous hotspots for the micro-bugs. Clearly, meddling with the animal world and rampant destruction of their habitats are proving disastrous for mankind.

From the last ice age (20,000 years ago) till the pre-industrial revolution, atmospheric carbon dioxide increased to 280 parts per million (ppm) from 200 ppm; temperature increased by eight degree Celsius and sea level rose by 100 meters.

Burning of fossil fuels ramped it up to 416 ppm in 2020, the highest in the last three million years.  The latest climate model predicts a maximum increase in temperature by about four degrees Celsius due to this huge emission.

We have outperformed nature in just 200 years. The consequences are catastrophic. The warming has already melted more than 25 per cent of polar ice caps. The sea level is rising at an alarming rate of four mm per year. Globally, extreme climatic events such as, cyclones, rainfall, droughts, intense heatwaves and wildfires are increasing.

According to an IPBES report, about 75 per cent of the earth’s land stands degraded; it is polluted, deforested, or converted into farmlands. The Intergovernmental Panel on Climate Change (IPCC) has predicted that for each degree of warming, seven per cent of the global population will be exposed to a decrease of renewable water resources.

In geological records earth went through five biological extinctions including that of dinosaurs. The sixth anthropogenic extinction is in the offing. Nearly a million species are threatened with extinction. A recent paper in Nature predicted abrupt catastrophic loss of biodiversity in tropical oceans and forests by 2030.

IPCC also alerted that the distribution of many infectious disease vectors such as dengue, malaria etc, will be altered and increased. The list is endless. Our relentless pursuit of greed has made this planet inhabitable.

Optimism has driven several ideas required to change the pace of planet’s destruction. Renewable energy is slowly replacing fossil fuels. There has also been a radical change in food habits — from meat to more plant rich diets or futuristic commercial production of engineered meat; 15 per cent of global greenhouse gas emissions come from livestock.

Visionary biologist and naturalist EO Wilson said the only way to save the planet was to reserve half of the planet as protected areas for the 10 million species.

A reality check, however, reveals a different story. Since the ‘60s, global meat production has steeply risen by more than 370 per cent with no sign of reduction so far. No wonder that McDonald’s has proliferated across the globe with nearly 40,000 outlets and KFC share prices shot up to $100 — a 10 time increase in the last two decades.

International Energy agency (IEA) data showed that the global investment in oil and gas sector is more than $700 billion while that in coal is about $80 billion compared to only $20 billion in renewable energy.

In India alone, the coal production has doubled over the last 20 years more than 600 million tonnes from 300 million tonnes. With more than a million employed in the coal sector and India’s plan for private investment spread across 40 mines, it is clear that carbon dioxide and nitrous oxide emitting dirty fuel is here to stay.

Likewise, thousands of production rigs from Gulf of Mexico to Persian Gulf cannot be shut down in foreseeable future. There is no denying that oil still drives the global politics. Oil reserves in Europe and the United States are substantially depleted with less than 40 years life, while those in West Asian countries will continue to hold major oil reserves for more than 100 years.

The cause of the perpetual turmoil in West Asia is, therefore, anybody’s guess. As the resources get depleted, constantly changing oil geopolitics will propel more disorder or wars and unabated beating of the planet.

Conspicuously, whether it is global warming or social disorders, poor countries bear the brunt. In the Sundarban delta, sea level rise and cyclones have forced poor people to migrate upstream. According to the international displacement monitoring centre (IDMC), in 2019 alone, nearly 250,000 people were displaced in India due to monsoonal floods.

The plight of these ‘climate refugees’ is no different from those displaced due to the Syrian war. World Bank estimates that nearly 100 million people will be pushed into extreme poverty. Much of them will be from already marginalised section. The Covid death rate in US is highest among black and Hispanics.

During the outbreak of Spanish flu, the then health officer of Calcutta wrote: “The excessive mortality appears to be due mainly to large coolie population, ignorant and poverty-stricken, living under most insanitary conditions in damp, dark, dirty huts. They are a difficult class to deal with”. Clearly we did not learn anything in a century.

A recent paper published in the journal Proceedings of the National Academy of Sciences suggested intelligent life in the universe is rare and might never re-appear. Yet, sapiens are in a self-destructive mode.

In 2019, the global military expenditure was $1,900 billion and in large number of countries per capita expenditure for health was below $100. Number of international armed conflict has doubled during the last 50 years.

In 2019, the disparity in hunger index between rich and poor countries was 10 times. The US had already withdrawn from Paris accord and the Trump administration wants to re-open coal mining.

Is it possible to have a planet that no longer uses oil or coal, does not kill millions of farmed or wild animals, degrade wetlands, river or ocean, and wipe out hills and forests for industrialisation? Or can we think of digital technology that does not require metals like lithium, gold or platinum from deep mining?

The recent environmental impact assessment notification will spell doom to our environment. The optimism is quickly fading.

The people of ancient Indus valley civilisation were genius to adopt water conservation when rainfall was erratic; switched to cultivating dry crop millets instead of water-intensive crops and survived for 2,000 years. This could have only happened when the society is participatory in nature and does not engage in perpetual conflict.

The modern civilisation is just 200 years old and it is hard to tell what will happen after another 1,000 years. COVID-19 has sounded an alarm that echoes Stephen Hawking: “As with climate change…. epidemics and population growth, our own planet is increasingly precarious…it will be difficult enough to avoid disaster in the next hundred years…our only chance of long-term survival is … to spread out into space.”