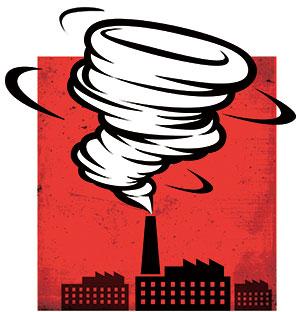 Fifty storms in 16 states of India have killed over 500 people and destroyed acres of crops in two months— April to May 2018. This is not normal. Or is this the new normal?

The fact is that these storms are the warning signals of what is going wrong in our world. First, the storms are the result of our mismanagement—of water and of land—that ensures that there is more desertification and more dust to be raised and swept with the furious winds. It is also about our sheer inability to get our weather forecasting system geared up and operational for the new normal—the normal where natural weather variability will combine with global changes in weather because of climate change.

In this case, let’s be clear, the storms could not be stopped. But people did not have to die. There was a Doppler radar close by—capable of detecting dust levels at the surface and horizontal wind velocities—that could have forewarned the most deadly storm of May 2, 2018. But the radar, located in Jaipur, is not functioning. It is out of order.

This clearly is what we cannot afford anymore. The fact is that storms of 2018 hold a mirror to our future. But first, let’s decode the dust. Why is this happening? And what is different?

My colleagues at Down To Earth have put together the pieces of information to reveal a zigsaw of changing weather science. Firstly, there is the changing character of Western Disturbances (WDs). These are winds that originate in the Mediterranean, travel across West Asia and enter India, where they are blocked by the Himalayas. This leads to rains and snow. And has done so forever. But what is different now is that instead of two-three WDs, now we are seeing 10 and more. Even more differently, WDs are coming later and later into the season.

The normal is that WDs would come in winter months—bring snow. But now they are coming in April and even May. In fact, even as I write this in the first week of June, there is WD looming over the sub-continent. This is new. This is not normal.

So, why is it happening? The science on this is still nascent, but increasingly it is clear that WDs are changing because of the warming of the Arctic. Why, you will ask? The fact is that with a warmer Arctic the difference in temperature between that cold region and the Equator has reduced. This in turn is making the jet stream—winds from Arctic to Equator—to weaken and meander rather than take straight course, which in turn is affecting the seasonality and movement of WDs.

But this is not all. The fact is temperatures are rising in the Bay of Bengal—an increase of 1-2°C has been recorded over normal averages. This means there is more moisture to transport and more cyclonic activity. This cyclonic system is now colliding with the drier, colder but late-coming WDs—leading to intense and widespread storms. Making things worse is more heat and dust everywhere. This year temperatures have spiked across northern sub-continent. In Rajasthan temperature shot up over 46°C in end April and Pakistan reported over 50°C—at times 4-5°C above the average. In parts of the Indo-Gangetic Plains temperatures 8°C over normal have been recorded.

So, this is not normal. But it makes for the new normal as this high temperature means less moisture on ground, more dust and more desertification. It creates the conditions for a dust-bowl, where wind speeds—which have a threshold of 90-100 km/hour for storms—go over 130 km/hour resulting in a much more destructive force.

All this has led to a deadly season of convective storms—with much higher frequency, intensity and death toll. Just consider, between 1980 and 2003, India saw nine deadly convective storms, which killed some 640 people. In the next 14 years—2003 to 2017—22 storms were recorded, which left some 700 dead. But in 2018, we have already seen 50 such storms and 500 deaths.

So this new normal is a combination of humanmade factors—playing at local to global levels. From soil mismanagement and desertification to global emissions of carbon dioxide, which is warming up the Earth’s surface and making all sorts of things so wrong and weird.

It’s time we understood this change. This is not small and nor will it go away tomorrow. This change is here to stay and it will become more deadly as temperatures continue to spiral, getting out of hand. It is also clear that today the poor in the world are the victims of this “humanmade” disaster. The rich do not die in sandstorms. The rich do not lose their livelihoods when the next cyclonic system hits.

But the fact is that this weird weather is a portend of what awaits us. The change is not linear, and it is not predictable. It will come as a shock and we will not be prepared for it. Climate change at the end will be an equaliser—it will impact the rich and the poor. This much is clear. The question is what will we do to fix it. That is not clear. Not at all.