Climate change is about two things: mitigating the global warming effect and adapting to the changed climate 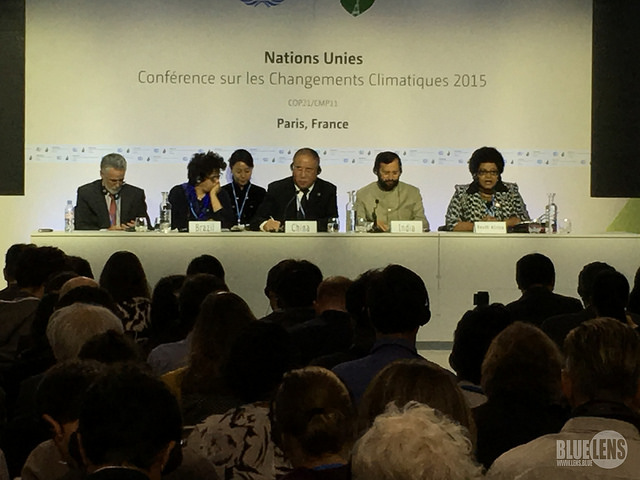 Since the day I landed in Paris to cover the much-anticipated COP 21, a few questions have been bothering my mind.

As someone representing a developing country, I asked myself where are the climate negotiations really headed to? Another matter which has bothered me is leaving aside important issues such as differentiation and climate finance till the very end to be sorted out.

Climate negotiation is not just about the environment. It has a lot to do with economies of the countries and the “bottom-lines” of big businesses. Therefore, negotiations are a lot more complex than just listening to what climate science tells us to do.

Given all that, dealing with climate change is ultimately still about two things: mitigating the global warming effect from greenhouse gas emissions and adapting to the changed climate due to past emissions.

It is precisely due to the past emissions that some countries are more responsible than others in causing the problem of climate change. Hence, they should be the ones taking the lead in solving the grave issue. This is what the whole debate on “differentiation” and “climate finance” is all about.

Given the criticality of these issues, I am frustrated to find that the countries are nowhere close to reaching any consensus. The alarming thing is that there is just one day to go before the summit concludes.

This is after five other sessions during the year where a lot of time was spent discussing lesser important issues, debating over the modes of work, language and so on, but leaving aside these critical issues till the end.

I like to ask myself, was this part of a deliberate strategy by some countries to ensure that there is not enough time left to properly debate and address these important issues till at the very end, and thus, force a deal with minimum commitments?

The next day or so will eventually reveal the answer to this question, but my expectations are low given the sequence of events leading up to this stage of the negotiations.

The other critical issue that was needed to be tackled as early as possible in the negotiations was the issue of the global carbon budget.

The long-term temperature goal of well below 2 degrees Celsius (or 1.5 degrees Celsius if possible) implies that there is a finite carbon space that the world is left with. Then, should the negotiations not include debates about how to allocate or distribute this left finite space in a just and equitable manner among all the countries?

Most equity models show that developed countries have already exhausted their existing carbon budget and there is little for them to continue emitting.

If they apportion more carbon budget for the future, which they would do under their current unilateral pledges, then they would occupy more carbon space unfairly and the climate deal would be iniquitous.

A few side events dealt with the issue. The Centre for Science and Environment (Delhi-based non-profit), the Global Carbon Project, Universitat Politecnica de Catalunya and so on raised the issue, but unfortunately there was not enough to build momentum to get the concept of carbon budget in the draft agreement.

However, the carbon budget figured in the “draft decision text” and will hopefully provide the necessary “hook” to keep in the concept for future cycles of commitments by the countries.

The role of civil society organisations

My two weeks has given me a lot more appreciation into the role that civil society organisations played in the climate negotiations.

The words “global carbon budget” is still part of the draft decision text of the Paris Outcome and is a clear contribution from civil society outfits working on this issue.

Indian Prime Minister Narendra Modi, in his opening remarks, spoke about the need for prioritising carbon space for development, thus treating it as an important intervention on the behalf of developing countries.

As one of the larger consumers of coal, India had been drawing criticism in the first week about its plans to increase coal consumption.

But an important press briefing by the CSE showed how this was just one part of the larger energy access challenge in India and that the consumption is very small when compared to countries such as the US on a per capita basis. India also has one of the most ambitious renewable energy plans in the world—to increase it to 40 per cent on installed capacity by 2030.

Messaging on these lines managed to change the narrative about India and there has definitely been an altered perspective about the country’s coal consumption going into the second week.

Several other important interventions by civil society organisations have shown the very critical role they play in influencing the negotiations directly or indirectly.

A delay in one of the sessions gave the chance to step out of the conference area and head over to the Climate Generations area—a space set aside from the place where the main negotiations are taking place. I was taken aback by the level of energy the place seemed to emit.

There were demonstrations, musical renditions, posters, message boards, interesting stalls and so much more happenings.

There were youth groups, civil society organisations, indigenous people’s groups too. Everyone had one thing in common—talking about the urgent need to address climate change, something that was surely missing from the “blue” zone where all the long-drawn out negotiations were taking place.

Climate negotiations often involve so much of hair splitting over the language and interpretation of the text and punctuations that it gets disconnected from the real world.

I really think that having participation from such diverse groups in the main area would bring in a sense of realism and enable all climate enthusiasts to draw inspiration. This will also make the entire process much more inclusive.

We may or may not achieve an ambitious climate deal. But one of the images of the Paris summit that will always remain with me is the frenzy, the vigour and the excitement of the Climate Generations area.