The wake up call 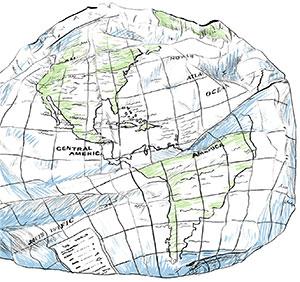 The United Nation’s Intergovernmental Panel on Climate Change (IPCC) consists of scientists who can by no stretch of the imagination be called radical or activists. These are conventional scientists working in conventional research institutions—mostly from the rich world. When they issue an urgent warning about the dire and catastrophic impacts of climate change if the global temperatures exceed 2°C above pre-industrial levels, then we must take it very seriously.

Also because, what IPCC says in its just released report on 1.5°C is probably an underestimate of the kind of dangers that await a warmed world—many scientists say the report has not taken into account the spiral of events, called tipping point, which will be unleashed as temperatures rise. The news is not good. It’s time we understood this and stopped questioning the science of climate change.

IPCC has revised its previous findings; it now says the impacts of global warming will be greater than what was previously anticipated at a temperature rise of 1.5°C. It should not surprise us. The world—particularly the poor world—is already seeing devastating impacts when the temperature increase is 1.2°C. Climate change is in our face. We don’t need science to tell us anymore that it will happen. What IPCC tells us is that the situation will get much worse, and that we must not allow the temperature to increase by 2°C.

The question then is only one: What can and must the world do to keep the temperature rise to below 1.5°C? IPCC estimates that to stay below this temperature guardrail, the world has to cut net anthropogenic CO2 emissions by 45 per cent over the 2010 levels by 2030, and reach net zero by 2050.

Let’s unpack this statement. Roughly half of the CO2 emissions generated through activities of humans need to be cut by 2030. But as these are “net” emissions, it means that the world can emit more but the emissions must be “removed” to achieve the targets. The “removal” of emissions happens through “natural sinks”—oceans, for instance, absorb emissions and are part of the world’s natural cleansing systems. Then forests are important “sinks”—they sequester carbon. But the report is also pointing towards technology-induced removal through carbon capture and storage (CCS), where emissions of CO2 are harvested and then pushed back to store deep under the earth’s surface.

Remember, this is when the world remains intensely unequal in its consumption of energy and so does its emissions. The challenge is to reduce and yet, at the same time, increase the use of energy by the poorest in the world. According to IPCC, the remaining global CO2 budget—how much can be emitted for the world to stay below 1.5°C—is somewhere between 420 gigatonnes of CO2 (GtCO2 ) to 580 GtCO2 . At the current rate of emissions, this budget will be exhausted by 2030.

Remember also that the bulk of the carbon budget has already been appropriated by the already-rich countries. By 2030, when the budget is over and if the world wants to stay below 1.5°C, then it must be in negative emissions. That is, it must emit less than what the world’s sinks can clean up. What will then happen to the developing world? Now that the cake is all eaten, even the crumbs have been gobbled up, what happens to the development needs of millions who do not have access to energy and the millions who still need growth.

Does this mean the world stops talking about equity in climate change? This is what the US has wanted for long. Its current President Donald Trump has taken it to the extreme—countries like India who want the right to development are the problem, he says. The US must be allowed to pollute more because it is its birthright. All this said as crudely as only he can.

There is no doubt that equity is now passé in many ways. Countries like India, as is reiterated in the IPCC 1.5°C report, will be the worst impacted by climate change. This is not the time to gripe about who has created the problem and who must solve it. That time is gone. Also, there is no point in crying over spilt milk—the carbon budget is gone. Countries have emitted and filled up the available space. Now what is this talk of “equity”? What does it mean?

The fact is we have to operationalise “equity” in this changed scenario. This requires all countries, including India, to act. But it also requires much deeper cuts from the already developed world and financial and technology support to the energy poor to increase their emissions, if possible, differently and with lower carbon emissions. This is not the time to point fingers at the victims of climate change—at countries like India for needing space to develop. This calls for enormous sagacity and leadership so that the world can jointly and collaboratively find ways of reducing emissions and providing growth. Dismissing the need for climate justice will not get us anywhere.

Let’s discuss what can be done. IPCC looks at the rapid and far-reaching transitions in energy, land, urban and infrastructure— including transport and building sectors. These are big contributors to emissions.

So, what will it take to build a more secure future? Firstly, it means that renewable energy must supply 70-85 per cent of the global electricity by 2050. Currently renewables supply some 20 per cent of the electricity, with the bulk coming from hydropower plants. So, the challenge is enormous. How will this transition happen? The share of natural gas can be roughly 8 per cent in this mix, but even this must include CCS. Coal use must be close to zero per cent by 2050. This is a huge ambition—the world is still addicted to coal for producing electricity, in the rich as well as the poor parts. The developing world needs to provide affordable energy to large numbers of its people. How can it replace coal and yet provide this energy security? How? This is the question. But it is equally a question, how the rich world will completely de-carbonise its electricity? And all this in the times of Trump.

The challenge is ambition and equity in action. Drastic emission reduction keeping in mind the need for climate justice. Let’s keep our sights on this. Act. Act now. The time for prevarication and procrastination is over.