US not doing its bit to reduce emissions

Without strong federal funding, targets and commitment, it will be very difficult for the US to become a low carbon economy, a new CSE report says

Almost no developed country has made adequate progress in reducing its greenhouse gas emissions. Thus, the European Union (EU) managed to reduce its emissions by only 22 per cent in 2017, compared to 1990 levels, which falls woefully short of what its trajectory should have been, considering the principles of common but differentiated responsibility.

But even this poor performance seems stellar in contrast to the United States (US), whose net emissions actually increased by 3.2 per cent between 1990 and 2017 (see graph below), as pointed out in a recent report by New Delhi-based non-profit, Centre for Science and Environment (CSE). 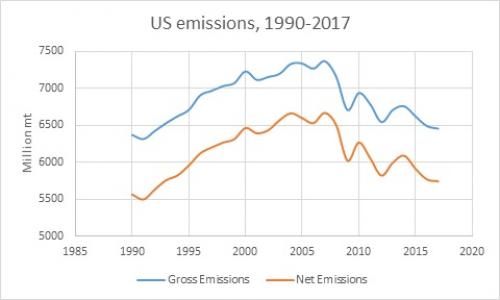 Net emissions have actually increased by 3.2 per cent over the Kyoto baseline of 1990

It bears mentioning that this poor emission reduction performance builds on top of huge existing inequalities; in 2018, the US’s per capita carbon dioxide (CO2) emissions from fossil fuel consumption stood at 15.5 Metric Tonnes (MT), compared to 8.9 MT in Germany, 6 MT in the United Kingdom, 6.6 MT in China and 1.58 MT in India. 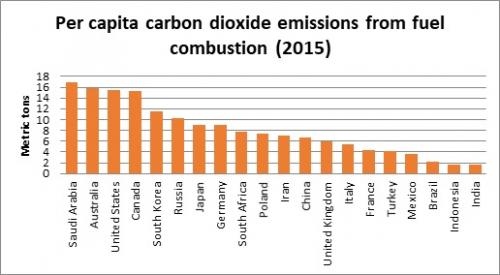 The US continues to be in the top bracket, but its population far exceeds that of its high per capita pollution peers

The US prefers to measure its performance against 2005 (rather than 1990 which is the Kyoto baseline) when its emissions supposedly peaked, and there has indeed been a 13 per cent reduction in net emissions in 2017 compared to 2005.

But not only has this decline slowed down; it may have actually reversed. Energy-related CO2 emissions saw a significant increase in 2018 (see graph below), at a rate which a report by the Rhodium Group estimated was the second largest annual gain in more than two decades. This rise is of immediate significance as it emphasises that it is very unlikely that the US will meet its Cancun commitment of a 17 per cent reduction in emissions over 2005 levels by 2020. 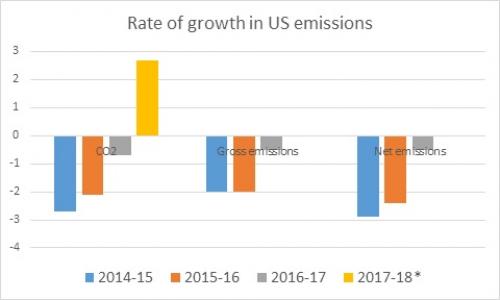 The broad story that emerges from the CSE report is one of continued skyrocketing consumption that has nullified whatever little gains have been made in reducing emissions. And these gains have largely come from low hanging fruit such as fuel switches from coal to natural gas, rather than sustained efforts at energy efficiency or renewable energy.

Thus, even as the share of renewables in the US energy mix increased from 7.1 per cent in 1990 to a disappointing 11 per cent in 2018 (compared to 17.5 per cent in the EU in 2017), due to increased consumption, the US in 2018 was more dependent in absolute terms on fossil fuels (consuming about 81 quadrillion British Thermal Unit), than it was in 1990 (consuming 72 quadrillion BTU).

This was a trend repeated across sectors. Thus, US power consumption, despite being among the highest in the world, actually increased by 38 per cent between 1990 and 2018. Emissions from the US power sector have only reduced by a meagre 5.2 per cent over 1990 levels.

Of renewables (which accounted for 17 per cent of US power generation in 2018, compared to 29 per cent in the EU in 2016), the lion's share was accounted for by hydro-electric power, a 'traditional', low hanging source of electricity. Wind accounted for most of the rest, attesting to the fact that even the small shift to renewables merely reflected market trends rather than a concerted effort, as onshore wind has been among the cheapest power sources in the US for at least a decade.

Transport emissions, which account for 29 per cent of US emissions, have grown by a fifth since 1990. While figures for 2017 do reflect a 5 per cent decline over 2005, the trend of declining emissions reversed back in 2013 and emissions have been growing again since.

Nearly 60 per cent of transport emissions in 2017 were from small, private vehicles such as passenger cars (41.2 per cent) and light-duty trucks including SUVs (17.5 per cent), the most inefficient means of transport.

In contrast, buses and rail together accounted for just 3.3 per cent of emissions, less than half that of commercial aviation; reflecting Americans’ preference for carbon-intensive transport such as flying and private cars. Highway vehicle miles travelled in the US increased by 50 per cent between 1990 and 2017 and air passenger miles flown also show similarly robust growth.

The industry sector, which accounts for 22 per cent of US gross emissions, has seen the most significant decline in emissions, at 12 per cent between 1990 and 2017. But this moderate success has more to do with the so-called de-industrialisation of the US economy which has seen a larger shift from manufacturing to industry, rather than significant decarbonisation and reduction in consumption.

The consumption of key industrial commodities continues to rise with the US now importing more, thus merely 'outsourcing' emissions. Industries, which remain in the US, not only perform poorly on emissions compared to other countries but show little sign of improving.

US buildings are another sector the study delves into. Including purchased power, emissions from commercial buildings grew by 12 per cent between 1990 and 2018, while residential building emissions increased by five per cent. Energy consumption in buildings has risen unabated, driven by the average size of (already huge) US homes and the booming demand for air-conditioning.

What may one take home from these numbers? In the US, the despondency engendered by the election of self-confessed climate skeptic Donald Trump and his subsequent decision to withdraw from the Paris Agreement has lately given way to a new narrative.

This narrative goes that with cities, states and businesses pledging to do their share, the US continues to be a serious player in the emissions reduction game despite the intransigence of the federal government.

Thus a study last year by the Rocky Mountain Institute and the University of Maryland argues that action by non-federal entities can reduce US emissions by 24 per cent in 2025 over 2005 levels — within striking distance of the Paris pledge threshold of 26 per cent.

Taken as a whole, the CSE report challenges this notion and argues that without strong federal funding, targets and commitment, it will be very difficult for the US to become a low carbon economy.