What it takes to reclaim the Thar 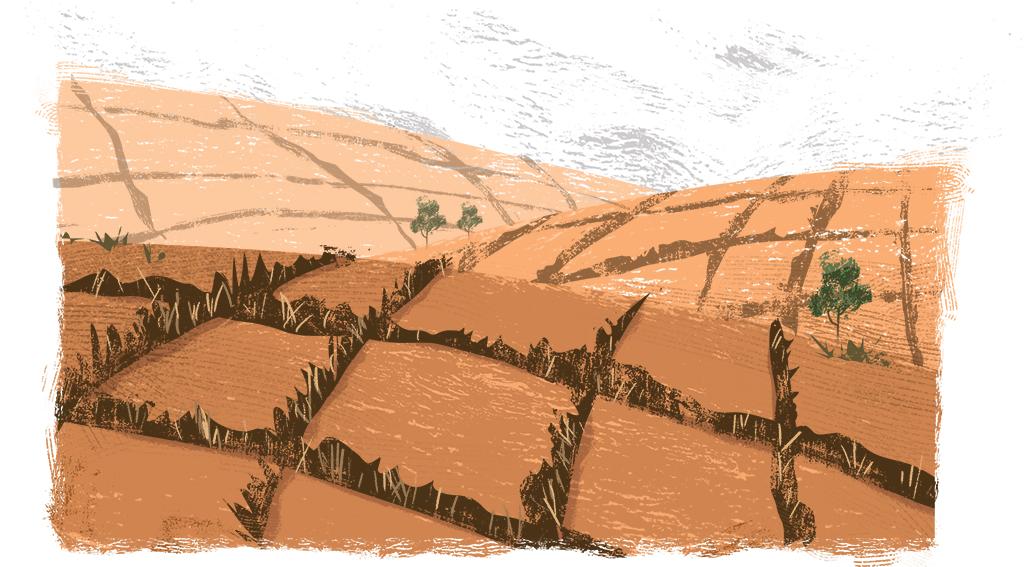 Desertification is severe in hot and arid northwestern India which comprises the Thar desert. Of the 32 million hectares (ha) of hot and arid land in the country, Rajasthan holds the maximum share with 62 per cent.The Thar is located between the Aravalli mountain range in the east and the river Indus in the west, and both influence the desert’s climate, landform and hydrology.

The weather here is absolutely inhospitable in summers with low humidity and wind speeds of 40-60 km per hour. The seasonal and annual temperature range is high.

It may rise to 50°C in summers and dip to as low as -4°C in winters. The annual average rainfall is very low, varying from 100 mm in the west to 500 mm in the east, but pan evaporation (a measurement that integrates the effects of temperature, humidity, rainfall and wind) is a high 1,800 mm, making the desert water-scarce.

The sand covered terrain spreads over 80 per cent of the area, a large part of which comprises sand dunes. Census 2011 shows that 28 million people live across western Rajasthan in over 12 districts and four agro-climatic zones that have a dominant agrarian land use.

Wind erosion and deposition causing sand movement and dust storms are the characteristic features of the Thar. Their severity is felt more in summers and is caused due to high wind speed, sandy terrain, sparse vegetation cover and human activity.

Interestingly, the wind erosion affected areas decreased between 2003-05 and 2011-13. The Central Arid Zone Research Institute, or CAZRI in Jodhpur, has taken several steps in the state, particularly in western Rajasthan, to tackle the problem.

Strategies for wind or sand control measures have been targeted for dune covered areas and sandy plains.

There are some known mechanical and chemical methods to stabilise sand dunes. CAZRI’s afforestation technique has been quite effective for the Thar. The institute targeted old sand dunes formed some 10,000 years ago and which had stabilised naturally.

Their mobility was as low as 3 to 5 metres per annum. CAZRI’s activities include a) fencing of dune areas to protect against biotic interferences; b) creating micro-wind breaks in parallel stripe or checkerboard patterns by planting locally available brushwood and grass; c) afforestation on dune slopes by directly sowing grass seeds and transplanting seeds of indigenous and exotic species; d) planting grass slips, seeds of grasses or leguminous creepers on the leeward side of the micro-wind breaks; and e) continuous management of dunes till the input cost is recovered.

Today, the technique is being used in Rajasthan’s desert districts Jaisalmer, Barmer, Bikaner, Jodhpur and Churu. With help from the state forest department, sand dunes over 0.4 million ha have been fixed. In areas that do not have dunes, CAZRI carried out shelterbelt plantation. Vegetative barriers of trees, shrubs and bushes minimise the adverse effects of winds.

Trees like A tortilis, E camal-dulensis, D sissoo and T undulata were planted in some 800 km in Jodhpur, Barmer, Jaisalmer, Churu, Jhunjhunu, Nagaur, Ajmer and Pali districts; 100 km along the railway tracks in Sikar-Loharu, Sikar-Fatehpur and Palsana-Deshnoke sections; and, 250 km in the Indira Gandhi Nahar Project (IGNP) area.

In extreme arid districts like Jaisalmer, such plantations have reduced wind velocity on the lee side of the shelterbelt, shows a 2016 CAZRI report. It also reduced soil loss by 76 per cent.

At least 14 per cent higher soil moisture and 70 per cent more grain yield of pearl millet was recorded on the lee side of the shelterbelt. But shelterbelts are not popular among farmers because in many cases trees hinder agricultural operations and inter-field movements. Nowadays, planting trees on field bunds across the direction of the wind is encouraged.

Plantations in checkerboard or parallel stripes have restricted sand movement on dune slopes. In IGNP area, such systems along with increased vegetation cover have influenced the micro-climate, shows research done by the Indian Space Research Organisation, or ISRO, in collaboration with CAZRI in 2015.

Similarly under shelterbelts, the average loss in crop productivity was 17 per cent due to cold waves, in comparison to 30 per cent on farms without shelter-belts. There was also a reduced 5 to 14 per cent pan evaporation values on either side of the belts. The problem of silting of canal beds has also been partially solved.

Results of the experiment have revealed that plantation of trees and shrubs at every location may not always be beneficial. On the highways in the western Thar, sand tends to get deposited where plantation on both sides of the road obstructs the passage of summer wind in the sandy plain areas.

Scholars, therefore, suggest sand to move across the road that allows faster grain transportation on the hard surface.

It is difficult to control the new dunes barchan and hummock, which are 3 to 5 metres high and devoid of vegetation. Barchans have fastest mobility; their movement has been measured at 31.7 metres per year in summers. In Thar, even the barchan slopes are put to mono-cropping of pearl millet whenever there is monsoon rainfall.

In the Thar margins, barchans occur with superimposed dunes (30 to 40 metre high). It is economical to let barchans move rather than tamper with their form, unless they pose great danger to some existing structures.

MANAGEMENT OF WATER in the desert is critical for residents, and is also the key indicator of desertification. Surface water is traditionally stored in natural systems such as village ponds or in structures like tanka that people construct. Though the IGNP systems have transformed the agricultural scenario and ushered economic prosperity, distribution of canal water till the tail end still remains a challenging task.

It is now a practice to construct small, rectangular tanks called diggi to store canal water. Such improvements in water resource management have increased the scope of bringing more area under agriculture. Irrigation water is now available to farmers through big canals like the IGNP and the Narmada.

Agricultural land use has now changed. Comparative statistics for 1957-58 and 2014-15 show major changes in western Rajasthan — net sown area has increased by 18.25 per cent, double crop area by 14.75 per cent and forest area by 1.61 per cent. There is a decrease in culturable waste, current fallow and old fallow lands.

Data shows a transformation from subsistence to intensive form of agriculture, meaning there is now a desire to grow crops that are economicly beneficial. Such radical changes in the mindset of farmers are also due to institutional support and research interventions.

Development of improved variety of crops, identification and development of agro-forestry, agri-horticulture, hortipastoral and silvi-pastoral systems are helping farmers with better livelihood options.

CAZRI has developed Integrated Farming System (IFS) on 7 ha which has the capacity to generate employment of more than 845 mandays and provide up to Rs 2.5 lakh per annual returns. The farming community’s rising livestock population and dependency on them is the key to IFS. Crop production technologies such as farm yard manure management, optimum tillage, inter-cropping, rain-water harvesting and use of pressurised irrigation have helped in sustainable crop production.

The use of techniques for efficient rainwater management, the introduction of new arid fruit and fodder crops, forest trees suitable for arid region, the management of plant diseases and insect pests, and enhancing gum exudation from trees have increased the scope for better crop prices to farmers.

To control the degradation of range-lands, salt-affected lands, water-eroded lands and mine-spoils, different packages of practices have been evolved. Once the technologies are known, they are tested on farmers’ fields, and the economic benefits from the practices are worked out and disseminated to the farming community.

The desert dwellers are now witnessing new developments in renewable resources like solar, wind and the hybrid systems. Wastelands are giving space to such energy system installations. Thus, it is likely that in future, “wastelands” such as saline depressions, rocky and gravelly areas will decrease further.

This water-deficient region will become a hotspot for the country’s proposed river-linkage programme. If water becomes available, the region will have greater responsibility to manage its resources and tackle other forms of degradation. The lessons learnt from IGNP will definitely help the Thar farmers to combat desertification effectively.