The climate change goal must be fixed at 1.5°C so that we get a chance to avert the worst impacts 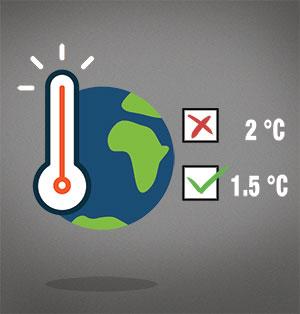 The 1.5°C IPCC report released in Incheon, South Korea has come with a dire prognosis: a 2°C warmer world will have devastating effects on communities, economies and ecosystems. The goal of climate change, therefore, must be firmly fixed to 1.5°C to have a fighting chance to avoid the worst impacts.

But limiting warming to 1.5°C will be difficult, if not impossible. The IPCC report makes it clear that the Paris Agreement cannot limit warming to even 2°C. In order to limit warming to 1.5°C, CO2 emissions will have to be reduced by 45 per cent by 2030 from 2010 levels and reach net-zero by 2050. This means maximum effort needs to be made by 2030. This will be a herculean task considering the obstructionist behaviour of the US—historically the world’s biggest polluter.

In Incheon, the American delegation tried its level best to dilute the findings of the 1.5°C report. This is a continuation of the Trump administration’s policy to destroy global climate negotiations and promote fossil fuels. How the rest of the world handles the climate rogue behaviour of the US will decide whether we can meet the 1.5°C goal.

The world urgently needs a “Plan B”, as Plan A—the Paris Agreement—is inadequate. The first component of Plan B should be to quickly achieve a global consensus to make 1.5°C the new target. There will be an inclination among the countries to reject 1.5°C as impractical and keep the target at 2°C. This would be disastrous for poor and developing countries. If we keep the target at 2°C, we will probably overshoot it. But if we agree to keep the warming within 1.5°C, we will probably contain it well within 2°C. Plan B requires the building of a new coalition that keeps the US in climate negotiations but marginalises its overwhelming influence. This will mean a Paris Agreement Plus approach that creates more forums for sector-specific and regional alliances on reducing emissions.

One area where I disagree with the 1.5°C report is with respect to the phasing out of fossil fuels. The report emphasises the need to reduce coal, though it allows the use of natural gas with carbon capture and storage. This differentiation among fossil fuels is more politics than science. All studies show that gas is equally climate damaging if methane leakages are included. We will have to act on all fossil fuels simultaneously.

We will succeed with Plan B if the burden of this transition is shared equitably and fairly among countries. As the IPCC report points out, “social justice and equity are core aspects of climate-resilient development pathways that aim to limit global warming to 1.5°C”. The world, however, requires a new formulation of equity in which every country must act now and actively raise its level of ambition. Developed countries and rich developing countries must take the lead by decarbonising their economies and reducing consumption. Poor developing countries should pursue low-carbon pathways and limit addition of fossil fuel assets.

Limiting warming to 1.5°C will require “rapid and far-reaching” transitions in everything we do. This is the right time to do this. We have the scientific understanding and technology. Limiting warming to 1.5°C requires investing an additional US $2.4 trillion annually in the energy sector between now and 2035. This is about 2.5 per cent of the global GDP. In comparison, military spending in 2017 amounted to 2.2 per cent of the GDP. The question is: are we smart enough to switch spending from killing to living?

(This article was first published in the 16-31st october issue of Down To Earth under the headline 'Plan B for the planet').