Why do city authorities appease only the cyclist who pedals for recreation rather than support cycling as a means of transport?

Why do city authorities appease only the cyclist who pedals for recreation rather than support cycling as a means of transport? 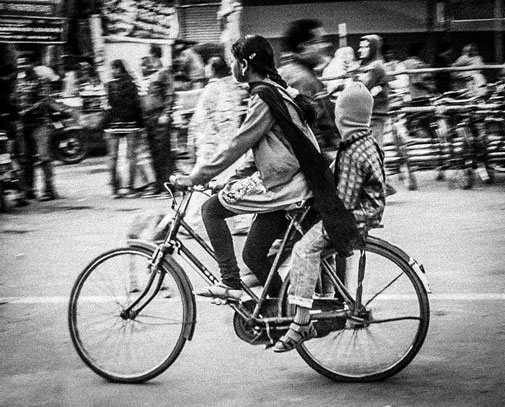 Right to safe cycling is gaining momentum and media attention across cities with each passing day. But there looms a danger—that of losing sight of the bigger picture of making roads safe for all. The present trend of getting roads declared “no-vehicle zones” for few hours on weekends could well lead to victory for cyclists and oblivion for cycling. Let me explain.

There are broadly two categories of cycling: for sport and for transport. Cycling for sport, even if taken up professionally, is classified as recreational activity, and is popular because of associated health benefits. Cycling as means of transport is a mode of commute where health benefits are not the aim but a byproduct of the activity. Both are important and have separate and distinct roles to play in the overall sustainable future of our cities. One is great for community’s health and other for the overall city’s health as it eases traffic congestion and lowers vehicular pollution.

Cyclists with their fancy cycles and safety gears are regularly spotted on our roads. This is a wave of change in the affluent classes' attitude toward cycling. Cycling clubs have mushroomed in all major urban centres. Increasingly, large numbers of people from upper middle class have taken up cycling. This is a great lifestyle shift and the community is growing stronger with regular cycling events being organised. The movement has evolved over the years, from being scenic weekend excursion trips to an urban phenomena demanding safe urban space for cycling.

The battle has been waging on ground and in social media with considerable fan fare. There have also been some wins. Hyderabad declared a stretch of iconic Necklace Road in the city centre as “cycle only zone” for a few hours in the morning every weekend to aid safe cycling. Bhubaneswar also followed suit with a similar arrangement. Now, Gurgaon near Delhi is taking the initiative to the next level and converting whole bunch of city streets into no-vehicle public space every Sunday morning. These reflect the policy attention that the highly influential cyclists' class is attracting.

Meanwhile, there exists a population of captive users of cycles, comprising of the blue collared and economically weaker classes. This population is considerably larger (2.8 million cycle trips are made by them daily in Delhi while there are just a few thousand active members of cycling clubs) but barely noticed. Cycling their handlebar zero-emission vehicles without any safety gears, they are part of the invisible city. 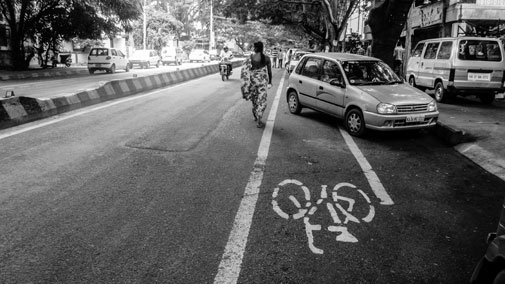 Right now nothing much is being done for cycling as transport. Cyclists' victories make little difference to this cycling class as “no-vehicle zones” are being declared on weekends instead of on weekdays when people need safe roads to commute. The tragedy is that the quieter class doesn’t even mind this apathy and continues to brave the dangerous roads, as they have been doing for ages. The attitude they sport is that roads are dangerous for everyone and not especially for them. This may be so because they haven’t known anything better; most don’t even know there exist cities like Stockholm or Copenhagen. Most don’t seek their right of way on roads unless cities like Kolkata decide to ban them.

The limelight is on the sport and recreational side of cycling owing to high visibility of this class of cyclists. One might argue that addressing the former would help the poor class, too, but this is where I beg to differ. Reason: recreation and transport are two unrelated and independent zones of urban infrastructure and policy planning.

Cycling is increasingly being seen more as recreational activity in policy circles, much in line with the right to walk and jog. Nothing wrong with this and cities might very well end up having cycling tracks inside every other park, just like jogging tracks. But this might change nothing on the road. One can pedal in the safety of these manicured green spaces but one cannot pedal to reach these sanitised cycling heavens. This is how things will pan out because they are covered under city’s recreational infrastructure, and not transport infrastructure, like we got the jogging tracks but not those sidewalks. Cities will also readily provide for recreational infrastructure because it is easier of the two infrastructures to create.

There is some good news for the cycling class. Cycle to work campaign is gaining ground. Even though their numbers are abysmally low, many cyclists have taken up cycling for daily commute. This trend coupled with cities’ desire to become Copenhagen or Stockholm has prompted investment in dedicated cycling lanes. The concept of equitable road space initially came with policy push for the Bus Rapid Transit (BRT) system, but now the push for cycling lanes is mostly derived from cyclists' enthusiasm. As a result, Delhi, Bengaluru and Mumbai have developed dedicated cycling lanes which are independent of BRT.

Hi-tech city, Hyderabad, is spending crores of rupees on its cycling lane network, hoping to capitalise on reported 500 cyclists braving the traffic and social stigma. Investment is based on faith that more will join the crowd after safe infrastructure is put in place, and the ordeal becomes less dare-devilish.

But the experience from Mumbai is bitter. City authorities declared their 13 km of cycling lane project in Bandra Kurla Complex “non-sense” and (unofficially) pledged never to indulge in such projects in future, when thousands waiting for dedicated lanes couldn’t transition to pedal on their arrival. Similarly, last year Lucknow dismantled the cycling track on Lohia Marg which it had proudly inaugurated in 2007.

Bengaluru gave road space for cycling by investing in painting 40 km of streets within the posh neighbourhood of Jaynagar. But it was also undone, this time by both people and the lane designers. All encroached by cars like the Delhi BRT—the only true dedicated cycling corridor in the country to my knowledge.

There is absolutely nothing wrong in constructing more cycling lanes, we surely need more. But for whom and at whose cost? Cities are spending crores of rupees in laying cycling tracks across IT parks and monuments instead of providing connectivity to our cyclist handyman who daily washes our cars. Delhi made a dedicated cycling track parallel to the scenic but eerie Tuglakabad Fort which is perpendicular to the whole cycling traffic which pedals from Sangam Vihar to Govindpuri in south Delhi. Then authorities complain that no one uses existing cycling lanes. All projects are being envisaged as cyclable neighbourhoods in a major way, hoping to get the more of affluent class to cycle instead of capitalising on existing mass cycling corridors. Fitting these road networks with cycling lanes or just improving safety and convenience of cyclists would be the real victory for cycling. The challenge for India today is not as much to cajole people back to cycling but to somehow retain the millions who are already cycling without a choice when they attain the means to switch to a motorised transport option. A switch which readily will happen owning to class divide and social stigma attached to cycling.

Now the challenge is can the cyclists' enthusiasm evolve further to include the invisible cycling class of urban India? Can the class divide be dissolved? Can the pressure on policy makers be directed towards improving transport infrastructure instead of just recreational infrastructure? Cities are bedazzled and baffled by the green mobility buzz, and I must say are doing right things for all the wrong reasons and at wrong places. They have burned their hands. Enthusiasm to build cycle tracks is now mostly because there are available funds and cyclists' pressure. Judging by current trends, cities will resort to appease the cyclist rather than support cycling. The danger is we might ace the annual cyclothon but will never defeat the daily traffic jam or the deadly smog.