Mirage of a river

Is restoration of the Sabarmati the way to go?

It is claimed to be an exemplary project. It has won two awards for excellence in innovativeness and urban planning; one from the Prime Minister’s Office. Narendra Modi, the Hon’ble Chief Minister of Gujarat, recently hailed it as his big achievement. He pitted the restoration of the river Sabarmati in Ahmedabad against the poor record of the Delhi government in looking after the Yamuna, the capital’s lifeline river. The media has showered praise on the project.

Claims apart, what are the facts on the ground?

River Sabarmati, the lifeline of Ahmedabad, gained global recognition when Mahatma Gandhi set up his ashram on its bank in 1917, lived there for more than a decade and, in 1930 led from its bank the famous Dandi March that roused the entire nation. It was here that Gandhi successfully tested his principle of civil disobedience against unjust laws. He even tried to set up a model rural community at the site of the Sabarmati ashram.

With its headwaters in the rugged terrain of the Aravalli range in Rajasthan’s Udaipur district, the Sabarmati, one of the largest west flowing rivers of the region, meanders its way over 370 km before merging into the Arabian sea in the Gulf of Khambat. The twin cities of Ahmedabad and Gandhinagar are situated on its banks. A monsoon river, the Sabarmati sees high flows in the season followed by low flows in succeeding months. Gandhi, when he stayed at the Ashram, is said to have regularly bathed in the river.

River Sabarmati is a classic case that highlights how a dam can kill a river. In 1978 an irrigation and water supply dam constructed on the river at Dharoi, some 165 km upstream of Ahmedabad, resulted in a steady deterioration of downstream health of the river. Restoring the river required bringing back its natural flow. Instead what has happened is beautification of just 10.5 km stretch of the river channel within Ahmedabad city. By no stretch of imagination can this be called sustainable river restoration work. 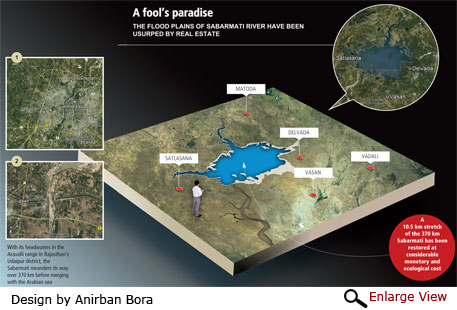 In 1997, the Ahmedabad Municipal Corporation (AMC) set up the Sabarmati Riverfront Development Corporation Limited (SRFDCL) to work on the Sabarmati riverfront. But the key problem was that a western style river front required a perennial river—the Sabarmati needed its natural flow. For this purpose, water from the Narmada river canal was diverted into the Sabarmati just upstream of the Sardar Patel ring road encircling the city of Ahmedabad—this was an act of grave impertinence since neither AMC nor SRFDCL had any rights over the Narmada waters, meant for the Kachchh region of Gujarat.

The Narmada water has thus been made to provide a visual feel of a river over 10.5 km distance till the barrage at Vasana. While there is no river either upstream or downstream, there is a 10.5 km-long artificial water channel. A 370 km-long river is thus sought to be showcased over a mere 10.5 km stretch at a cost not just monetary but also ecological.

The erstwhile flood plain of the river within Ahmedabad has been put on the line to try and fund the mirage. Funds from the environment minstry, the Housing and Urban Development Corporation and the Jawharalal Nehru Urban Renewal Mission have been invested from time to time into the project.

Lest we are misunderstood, it is not our case that a river’s flood plains within or outside a city should not be protected against encroachment or dumping of waste material by unscrupulous elements. But that is not the case here. Ridding encroachments and waste dumping has become an alibi to concretise and irreversibly change the flood plains.

There are ghats and temples on river banks in India. But the western style river front development, that is being attempted on the Sabarmati, is an alien concept whence the river’s natural flow patterns and often multi-channels have been irreversibly altered into a single channel “canals” that go in the name of rivers.

The river’s natural flood plains have been appropriated into paved walkways (called promenades), commercial properties and real estate. Often such selling of the flood plains has been justified in the name of generating funds to finance riverfront development. That a river without its flood plain is like a human without limbs has been little appreciated or understood, until a high flood has struck.

Often we in India ape western ways without realising the key difference between our climate and theirs: what could be considered appropriate in a temperate climate is out of place in our tropical and monsoonal land. The concept and practice of riverfront development falls in this category. Some such examples from the “developed” West are river Thames in London and river Yarra in Melbourne. While such conversion of flood plains into artificial walkways and other incompatible uses is well known and are prima facie quiet pleasing to the human senses, that these are inappropriate—hence avoidable—is now being understood in more and more places. Even in the west, small patches of erstwhile flood plains are being returned to the river—often at huge costs.

Clearly, what is happening in Ahmedabad, no matter how tall the claims, is most inappropriate for any river in the country. We must learn lessons from the mistakes committed in the past by other countries, while managing their natural assets and heritage like rivers.

Manoj Misra is the convener of the Yamuna Jiye Abhiyaan