A warning against indiscriminate selling and buying in a new fad: herbal drugs 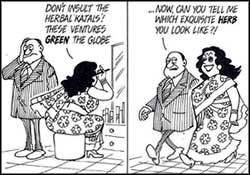 CULTS are dangerous and the world has never been free of them. But they are not all necessarily religious in nature. The latest in the bandwagon is the herbal cult The herbal cult was born in America -- aren't they all? -- out of a call to return to one's roots. It needed colonies to feed upon for raw material. Sounds familiar, doesn't it? Mexico was tried first. Jojoba became a herb par excellence. Then, the other old cultures or half-savage, half-civilised nations joined in.

In India, we have always used home-made applications as beauty aids. But the Americans have a way of making the most ordinary act seem the result of elephantine mental jugglery. Simple herbs were therefore invested with elements of sorcery, mystery and para-rational powers and a herbal cult was born.

The Indian market was flooded with herbal and flower cosmetics. Suddenly, the lowly kajal and the plebeian kohl were in. Prices rose ten-fold. Kajal, which was thought to be too expensive at Rs 6, was marketed at Rs 60 and still considered a steal.
The herbal cult brought in its wake a totally false and highly mischievous propaganda that took hold of consumers' minds: that herbs were harmless. What made it more insidious was the fact that manufacturers did not have to say anything about it. The herbal mania sweeping the world created a situation where the customer was just dying to be misled.

The fact is the environmentally toned hard sell for herbals has taken such a moral and self-righteous complexion that people began to revel in their lack of knowledge about the nature of herbs and chemicals. Today it is taken for granted, quite in the manner that the existence of god is, that because herbs contain chemicals in their natural state, they can do no harm. But if something has no power to harm your system, how can it have the power to do good?

To say herbs are harmless is to deny the whole system of Ayurveda, which lays such great stress on right and wrong combinations, not only of curative herbs but even of ordinary, everyday foods. Virudhahara (contraindication) is an essential feature of Ayurveda. In fact, the knowledge of what herbs to combine, in what quantities, when and for how long is so sophisticated and developed, it defies the codification and laboratory testing to which allopathic drugs are subject. That is both the power and danger of Ayurveda.

But now, herbs have been reduced to multinational hype and class euphoria. Herbal medicines and cosmetics are marketed without adequate testing, warning or information on ingredients used.
Recently, I allowed myself to be persuaded to buy a stick of herbal kajal at ten times the price of the ordinary, much-maligned, lead-encrusted, kohl pencil I have used for 35 years. I hold no brief for the lead kohl pencil. It might have harmed me -- it must be harming me -- but I was lucky not to suffer any adverse symptoms. For a woman of 55, I guess that was good enough.

But just one application of the newfangled herbal kajal and I had a severe allergy. The doctor to whom the manufacturers took me forgot all about herbs and prescribed nothing less than cortisone. My objections were overruled by a terse, "It's an emergency." This was confirmed by my ophthalmologist, who had otherwise warned me that the use of steroids would have dire consequences for my weak eyes.

No such warning came with the herbal kajal. There wasn't even a listing of ingredients that could cause allergies. After the incident, a spokesperson of the multi-million-dollar industry mentioned casually that the kajal was not supposed to be applied inside the rim of the eye, but only outside. But the product carried no such warning and it was by sheer chance I had not applied it inside. And, kajal is normally applied inside the rim -- most young girls who skimp and save to buy the environment friendly, fashion-hyped kajal apply it inside the rim.

I can forget the pain, itching, burning and swelling I suffered. But what recompense do I have for the loss of two weeks of my working life? And, what guarantee is there that the product will be withdrawn, retested and put on the market with a list of ingredients and warnings? Even if that one product is withdrawn, what guarantee do we have the herbal cult will be tempered with logic?

I believe it is the duty of environmentalists, back-to-nature scientists and detractors of the culture of pastiche, more than anyone else, to document and publicise the possible pitfalls and dangers of herb use. Otherwise, they will be guilty of aiding the spread of a culture that is far more trashy than the one in which we live today.

Mridula Garg is a freelance writer who writes novels and short stories for children.