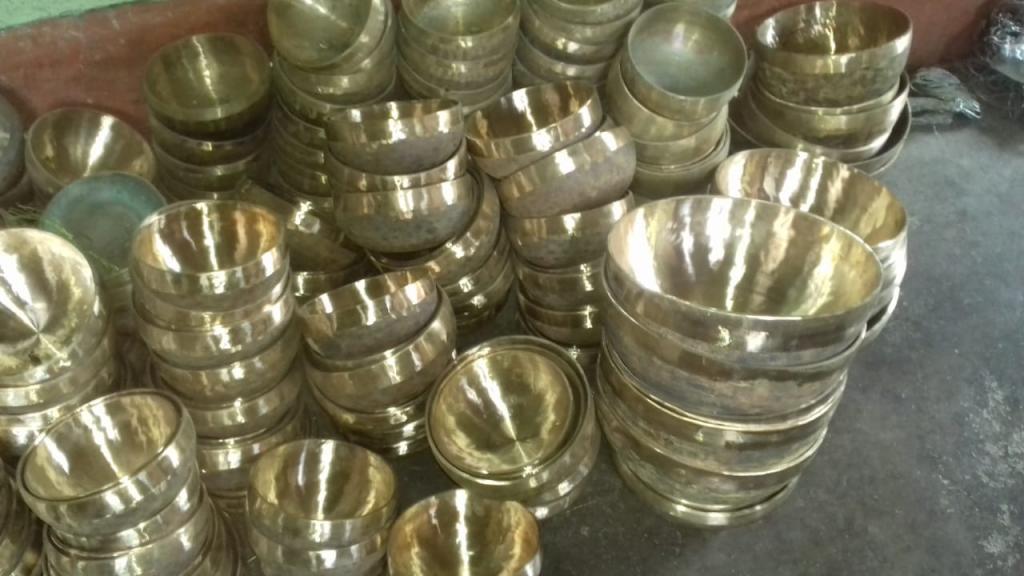 Pukhuria wakes up to the sound of a bowl in the process of being made and not to the call of a rooster as is common with any average Indian village. It is an unsung and unheard-of village in Bankura district, roughly about 250 kilometres from Kolkata.

It was a chance visit to the village on the day when Cyclone Fani hit the eastern coast that enlightened me to the existence of something as vivid and musical in a remote corner of West Bengal.

My first encounter with these bowls was during a visit to Kalimpong a few years ago. These dainty musical bowls are a frequent sight in Buddhist shrines as well as Tibetan gift shops. But their strange existence and conception in this dowdy village was what caught my interest.

As one walks through the narrow alleys of this village, s/he experiences a welcoming assortment of sounds and vibrations in the air.

Since ancient times, a craft associated with the making of ashta dhatu (a mix of eight metals) utensils for religious offerings, weddings and other social ceremonies and even personal use, has existed in India. Eventually, the demand for these speciality bowls emerged.

These bowls are reportedly used for meditative purposes and quite popular in treating ailments using music therapy. Their vibrations and resonance are claimed to soothe the surroundings and bring calmness to the body and soul.

The commercial transactions of these bowls involve countries like Nepal, Japan and even distant Australia. However, the major chunk goes to Delhi and from there, they begin their overseas journey. Despite these connections, the village seems way more content to keep a quiet profile, not preferring to harp on its claim to fame.

The village has practiced the craft reportedly for 150 years but its origin has not been historically documented. Till date, everything is done almost as was about all those years ago.

There are roughly about 75 saals (workshops) in the village, with roughly 400 to 500 people directly associated with the singing bowl manufacturing. The craftsmen claim to have never been trained professionally, but passed down the skills from their forefathers as a legacy.

The village comprises of about 85 per cent karmakars (metal workers), the dominant community here. Each saal engages about 5-6 karigars (craftsmen).

The bani can start from Rs 220 per kilogram (kg) and may increase, depending upon the quality of the alloy. Traditionally, the alloy comprised of eight metals (gold, silver, copper, lead, zinc, iron, tin, antimony or mercury) not only to improve the quality but also to uphold the purity and auspicious eminence of ashta dhatu in Hindu religious customs.

The more precious the metals that go into the making of the alloy, the higher are the charges. However, in recent times, the alloy has shifted to a combination of copper and zinc oxide with a 4:1 ratio for economic and practical purposes. The bowls range in weight from 1.5 kg to about 15-20 kg, depending upon the purpose of their use.

The raw material is brought in by the agents, which is then formed into the required alloy. The making of the bowl involves forming the blank, shaping it and giving it form, trimming, fine tuning and finally polishing.

Forming the bowl requires the craftsmen working in unison. There is one who continuously pedals, driving the lathe and the air to the furnace.

Once the blank has been warmed in the oven, two of the craftsmen hold the hot blank on either side with iron tongs, one supporting the blank from falling off and the chief craftsman begins beating the blank out. The hammering of the blank towards making the bowl take the final desired shape is performed by three craftsmen.

Internal finishing creates the evenness of tone. The final sound is tested by the agents through whom the finished items reach all over India and overseas. Every stage is significant and requires experienced coordination of the artisans that is painstakingly supervised by the chief craftsman.

The making of these bowls provide money for the economy to run.

However, a section of the newer generation is moving out of the village, which would make it difficult to continue the art form. A key challenge is the availability of coal and the metal for the alloys.

The entire manufacturing process is sheer austerity. The day begins at around 5 o' clock in the morning and ends by 12 noon.

Though the winters may be a bit lenient, one can only imagine the summers, with temperature soaring up to as high as 48 degrees Celsius, not to mention the incessant noise. The proximity to the fire, the complete manual labour and absolute lack of safety measures makes them vulnerable to respiratory disorders, ophthalmic accidents and even disfiguration.

The state administration seems to have no inkling of the existence and the need for infrastructural and medical assistance to these craftsmen. Even though the problems exist, the manufacturing of these bowls have continued through ages and is fascinatingly being pursued by a fraction of the next generation.

It is mainly due to the stable and lucrative financial returns that they assure. Amidst the sultry weather outside their saals, the heat of life and livelihood keeps the fire burning in the furnaces.

Soaked in sweat and glazed in soot, they keep the fire burning and hammering the bowls relentlessly. Pukhuria certainly knows how to work in harmony.

The village undoubtedly speaks the language of music and will hopefully continue to resonate and flourish musically forever.

(Aditi Sarkar is a faculty member at CAD Centre in Jadavpur University, Kolkata)