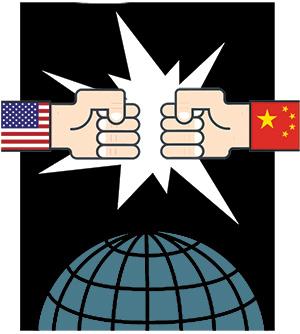 A global trade war has broken out. The United States fired the first salvo and there has been retaliation by the European Union, Canada, China and even India. Tariffs on certain imported goods have been increased in a tit-for-tat reaction. Analysts see it as a limited war in the understanding that Donald Trump is all for “free-trade”. But this view denies the fact that a tectonic shift is taking place in the world. It is a war for ascendency to global leadership; a contest between the US and China.

China is heaving its might on the world. President Xi Jinping's Belt and Road Initiative is an open call for its global influence. In July 2017, China launched the ambitious plan to invest in the technology of the future—artificial intelligence. There are dark (unconfirmed) whispers about how it is going about acquiring many new-age technologies by rolling over western companies operating in vast markets.

The last century belonged to the US and Europe with Russia as the communist outlier. China became mighty all because of the emergence of the free trade regime in the world. Just some 35-odd years ago, it was behind the iron curtain. But then the World Trade Organization (WTO) was born in January 1995. China’s trade boomed. It took over the world’s manufacturing jobs. India, too, found its place by servicing outsourced businesses like telemarketing. “Shanghaied” and “Bangalored” entered the lexicon—as jobs (and pollution) moved continents. This way, globalisation fulfilled its purpose to usher in a new era of world prosperity. Or so, we thought.

Instead, globalisation has made the world more complicated and convoluted. In early 1990s, when the discussions on the General Agreement on Tariffs and Trade (GATT) were at its peak, there was a clear North-South divide. The then developed world pushed for opening up of trade. It wanted markets and protection through rules on “fair” trade and intellectual property. The then developing world was worried what the free trade regime would do to its nascent and weak industrial economies. More importantly, there were fears of what these new open trade rules would do to its farmers, who would have to compete with the disproportionately subsidised farmers of the developed world.

In 1999 tensions flared up at the WTO ministerial meet in Seattle. By this time, reality of globalisation had dawned and so it was citizens of the rich world who protested for labour rights, worried about outsourcing of their jobs and environmental abuses. But these violent protests were crushed. The next decade was lost in the financial crisis. The new winners told the old losers that “all was well”.

Today Trump has joined the ranks of the Leftist Seattle protesters, while India and China are the new defenders of free trade. The latter in fact want more, much more of it. But again, is it so straightforward? All these arrangements are built on the refusal to acknowledge the crisis of employment. The first phase of globalisation led to some displacement of labour and this is what Trump is griping about. But the fact is that this phase of globalisation has only meant war between the old elite (middle-classes in the world of trade and consumerism) and the new elite. It has not been long enough or deep enough to destroy the foundations of the livelihoods of the vast majority of the poor engaged in farming. But it is getting there.

But this is where the real impact of globalisation will be felt. Global agricultural trade remains distorted and deeply contentious. The trade agreements targeted basics like procurement of foodgrains by governments to withstand scarcity and the offer of minimum support price to farmers. Right now, the Indian government is making the right noises that it will stand by its farmers. But we will not be able to balance this highly imbalanced trade regime if we don’t recognise that employment is the real crisis.

It is time that this round of trade war should be on the need for livelihood opportunities. Global trade talks must discuss employment not just industry. It must value labour and not goods. This is what is at the core of the insecurity in the world. It is not about trade or finance. It is about the biggest losers: us, the people and the planet.