If demand for camel milk rises, more livelihoods could be supported and more camel herds saved 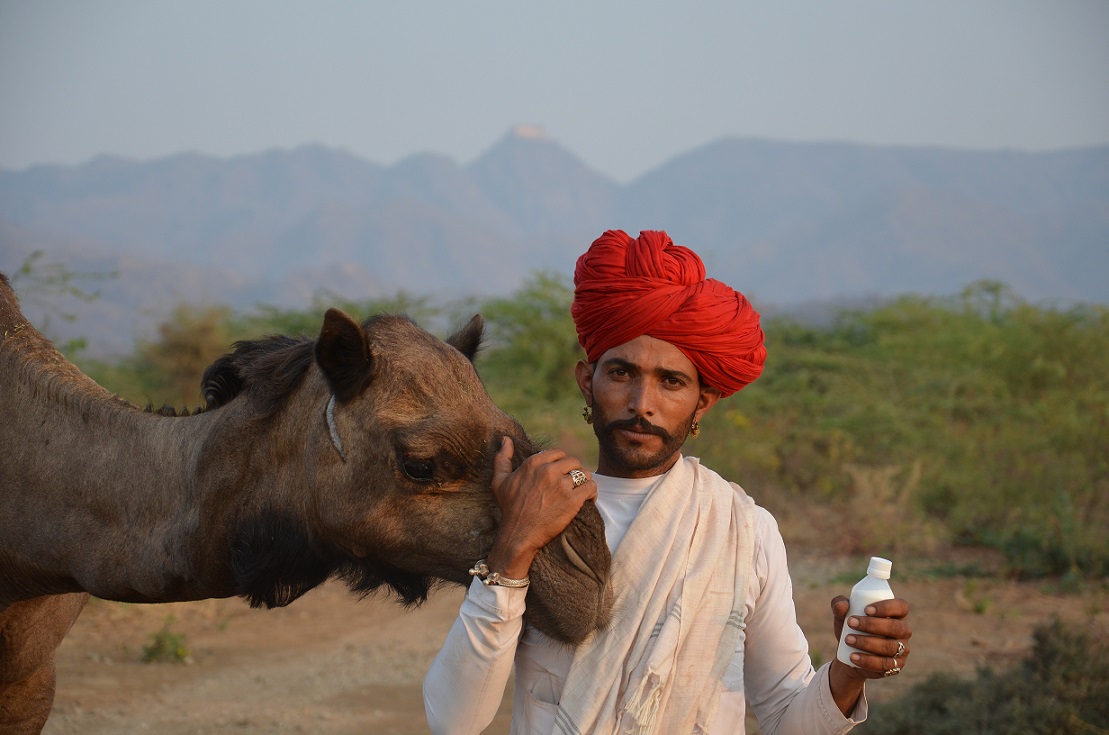 Bhanwarlal Raika earns Rs 50 per litre, or about Rs 500 a day and has already invested his profits in the purchase of a milking camel (Photo courtesy: LPPS)

It has been a year since the Rajasthan Camel (Prohibition of Slaughter and Regulation of Temporary Migration or Export) Bill, 2015, was passed by the state Legislative Assemblyon March 27. It’s now time to ask about its impact.

To investigate the role of the law, non-profit Lokhit Pashu-Palak Sansthan recently undertook a series of meetings in different parts of the state. The results are depressing. Prices of camels have fallen to below Rs 10,000, even less than what has to be paid for a good goat. Most of the participants are old, tired and resigned, hanging on to their camels only out of a sense of responsibility and nostalgia. None of their sons will follow in their footsteps. In fact, the children put pressure on their fathers to sell out their camel herds as quickly as possible: a non-asset that does not generate income, but necessitates hard work, practically around the clock.

One interesting fact that emerged was the extent of an unofficial camel milk market, especially in the southern and eastern parts of the state which are not known as your classic camel breeding areas. That camel milk is sold in Chittorgarh, Udaipur and Bhilwara districts has long been known. But that there is a highly organised camel milk market in the districts of Alwar, Bharatpur, Dausa, Jaipur and Sawai Madhopur too has come to light only now. About 30 “thekedars” each collect the milk from a number of herds and channel it into the Rajasthan Cooperative Dairy System. The hitch is that the milk is not declared as being from the camel, but as cow or buffalo milk.

Although Rajasthan has declared the camel its state animal, it has not accepted camel milk. According to an insider source, the Rajasthan Cooperative Dairy has concluded that camel milk marketing is not economically viable, after a prior attempt to market the milk made during Chief Minister Vasundhara Raje’s previous period in office had failed.

Marketing camel milk like any other milk, based on its fat content and oriented only towards volume and not towards quality, will not work. Camel milk is low in fat and, therefore, generates only around Rs 20 per litre in the current pricing system. This price is grossly inefficient, considering the nomadic herding practices and the variable, often vast distances that need to be covered between herds and chilling station.

Instead, camel milk must be marketed separately and as a health food. Worldwide, it is much in demand, especially for people suffering from diabetes and Autism Spectrum Disorder. Its ability to lower blood sugar levels in Type 2 diabetes patients is scientifically proven, as is its impact on autistic children who are reported to sleep better and start establishing eye contact after taking relatively small amounts of camel milk.

There is an emerging market for camel milk in India as well. Lokhit Pashu-Palak Sansthan has started shipping frozen camel milk in 200 ml bottles to cities such as Mumbai, Delhi and Bangalore. There is also a camel milk distributor in Delhi. This not only helps the patients, but also supports the livelihood of herders such as Bhanwarlal Raika who not long ago thought he would have to sell his herd, even though he loves camels and is both energetic and enthusiastic. “The day we started selling milk was the turnaround for my herd,” he says. He earns Rs 50 per litre, or about Rs 500 a day and has already invested his profits into the purchase of a milking camel.

If demand for camel milk rises, more livelihoods could be supported and more camel herds saved. This is the way to go about it: slowly growing the market and saving one herd and one herder at a time. But it is beyond the means of a small NGO to carry out this aim. It requires training of camel breeders in hygienic milk collection, investment in infrastructure, new technologies for conserving and shipping the milk, business acumen and a parallel awareness campaign about the benefits of camel milk. Dairy business as usual will not work. But social entrepreneurship that is not only profit-oriented but also concerned about the common good, livelihoods, food security and biodiversity would.

The rewards would be great. The presence of Rajasthan’s remaining camel herds is closely correlated with the existence of large bio-diverse grazing areas, including gochars, orans and forests. The distribution of camels and such (community-) conserved areas practically overlaps. So conservation of the camel could go hand-in-hand with the conservation of nature, with the creation of livelihoods and production of health-enhancing food, in a true agro-ecological approach. It would certainly add value to Rajasthan and could even become its USP.