Agriculture and allied activities are considered ‘essential’ and officially face no restriction to harvest and supply to the market, even in the middle of the novel coronavirus disease (COVID-19) pandemic. But an agrarian crisis stemming from systemic failures needs to be considered for immediate policy response.

The current distress among marginal farmers and unavailability of food to migrant labourers has been largely ignored in the Rs 20 lakh-crore economic stimulus announced by the Union finance minister. Substantial funding for strengthening logistics and deregulation of Essential Commodities Act, 1955, is an ambitious plan without addressing the immediate crisis.

The relief package lacked an innovative, decentralised approach to solve the looming hunger crisis. Although India holds a buffer stock of wheat and rice thrice the required norm, palpable effects of food insecurity are observed among the weaker section of the society. India’s food supply chain (FSC) will undoubtedly be put through a stress test.

During this, the state has two primary challenges in the agriculture sector — to ensure food security across the country and minimum post-harvest loss with new social distancing and safety rules.

Indian agriculture supply chain is a complex system — it depends entirely on the blue collar workforce. Only 6 per cent of the total supply chain is organised. Lack of warehousing and cold storage facilities has prompted most farmers to dump their bumper harvest.

The price falls as supply increases; even if there is a demand for the produce in cities, farmers will still bear the burden of bottlenecks in transport and infrastructure. The importance of FSC in linking rural and urban has significantly increased in recent times — around 78 per cent of the total food consumption in the country is perishables (non-grain) with shorter shelf lives.

The ‘transitional’ supply chain is uncertain during the times of pandemic, thereby increasing the transaction cost of the perishable commodities. In effect, farmers producing fresh fruits and vegetables with no knowledge about the market incur losses by supplying to the middlemen.

Implementation of minimum support price (MSP) is also considered a challenge as the Agriculture Product Market Committee (APMC) is unable to fetch fair prices in the local mandi. Structural shortcomings in agriculture production and supply have placed an immense pressure on small producers even during COVID-19 times.

Considering the possible factors driving the price, the state must aim to minimise the loss incurred by farming households and ensure MSP for marginal farmers.

The United Nations World Food Program has estimated 265 million people to face acute food shortage after the COVID-19 crisis. Ironically, India faces the threat of food security despite holding 58.4 million tonnes of food grain in addition to 3 million tonnes of pulses in godowns.

In response to the crisis, the central government announced five kilograms of rice and pulses for the next three months under the Public Distribution System (PDS).

Calculating from the Food and Agriculture Organization Corporate Statistical Database (FAOSTAT), India in 2017 exported around 2.8 per cent and imported 2.8 per cent of total food output.

Roughly 1.12 billion tonnes of food (92 per cent) is purchased in the domestic market of which 95 per cent is sold by the private sector. Only five per cent of food is procured by the government to supply through PDS, hence diluting the role of state in the country’s FSC.

According to National Food Security Act, 2013 (NFSA), 67 per cent of the total population are to be given food at subsidised rate. However, census 2011 data is used to identify the beneficiaries and estimates that the population has grown over the last decade.  Around 100 million people are estimated to be out of the safety net program.

A 2015 study on understanding leakages in PDS has provided a clearer picture. Using the 2011 population data, the above poverty line (APL) quota is identified to be the main source of around 30 per cent of leakage.

Ambiguity in estimating the beneficiaries is the first obstacle in providing food security. Substantial food movement is undertaken by private supply chains and during the time of crisis, it is essential for the government to bolster the broken channels of supply chain to meet the requirements.

Even after accounting for additional provisions under PDS for 800 million people, India will be left with roughly51.6 million tonnes of food grains. The cost of relying only on private players to supply at the time of restricted labours and low liquidity would lock foodgrains in godowns.

It is almost impossible for the state to ‘replace’ the existing supply chain, but a policy package to ensure essential supplies are provided to achieve food security takes precedence during the great lockdown. 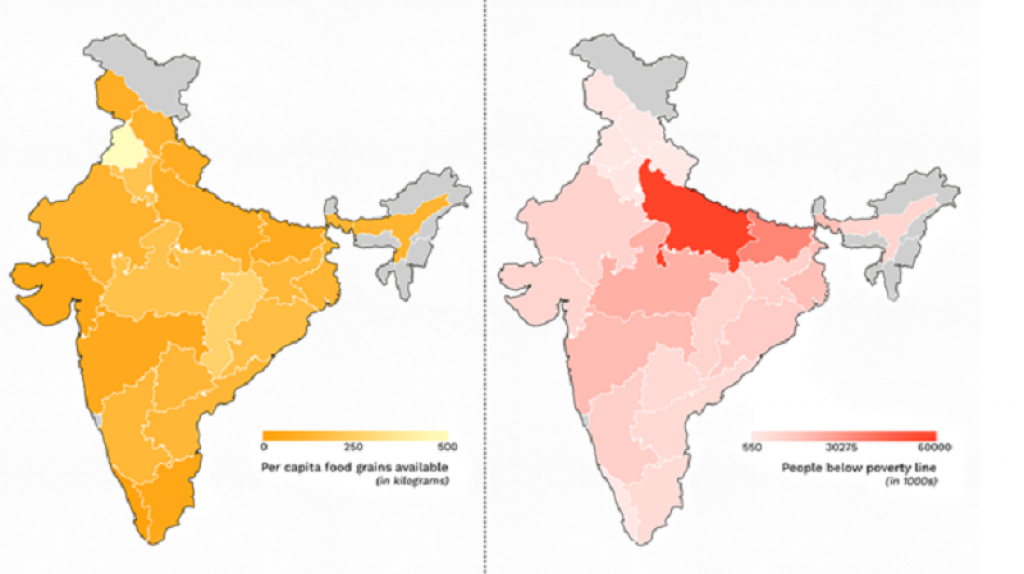 Some states have more number of people in BPL category, although southern states like Kerala and Tamil Nadu have 4 kg per person and 47 kg per person respectively, lower poverty rates and better PDS architecture. According to advanced estimates of 2019-20, Uttar Pradesh, with 90 kgs per person and Bihar, with 72 kgs per person, will face challenges to meet food requirements of BPL people.

Every state has their own demographic and inventory, and the central government’s one nation one card will achieve national coverage only by March 2021. Immediate recognition of people without ration cards is needed to urge states to release food depending on poverty levels.

It is also important to note that the poverty data estimated is also outdated, and with increasing unemployment and economic uncertainty, more people could be pushed towards BPL category.

The poor income of farmers and unavailability of food can be addressed only if the states take a proactive role in the next few quarters. An assured food supply is critical. Accounting for the shortcomings of FSC, farmers’ income in the medium run is of concern.

Agro technology can be promoted to address the structural challenges in the food supply chain market. Agriculture sector continues to deserve policy attention as the producer and the consumer remain the victims of both market and government failures.