From quarters to kothis: A migrant couple’s journey to nowhere

These are trying times for all — and particularly stimulating for professionals who study the human mind.

There has been an emergence of a deeply nuanced behavioural pattern among a community that has had the attention of the global audience for the better part of this year. It is also the one that has been weathered by series of extremely disruptive socio-economic upheavals recorded in recent times.

It is the community of the migrant workers.

Geographically speaking, the swelling ranks of migrant workers are spread across the nation. But I have focussed on a small section in Gurugram as my representative sample.

The Haryana’s ultra-tech metropolis has been my home for the last 20 years. This report is based on informal chats with people who have worked with us, for us and around us for decades now. Under the scanner are migrant workers hailing from Jharkhand.

Diya had run away from home in Kamersak, a tiny village in the hinterlands of Jharkhand, with Deepak, her partner, after he was turned down by her parents. The destination of the young couple was Delhi: Not because they knew the city better than the other metros, but because they had faith in the ‘social safety net’ put together by their community elders who had been living and working in and around the city for decades.

The system is quite simple. The young hopefuls who arrive in trainloads are allowed a couple of weeks — which may stretch to a month — in the quarters. The quarters are my unit of observation, as I explore the depth and dimension of the social churning that is in process in the colonies of Gurugram. They reflect the tangible, identifiable impact of a generation shifting base, both physically and metaphorically.

Diya and Deepak are the direct beneficiaries of Jharkhand’s people-driven and people-sponsored welfare scheme. Five years since they came to Delhi, they have a rented quarter of their own that acts as a (sort of) 24 / 7 help centre for those just arrived in the city. 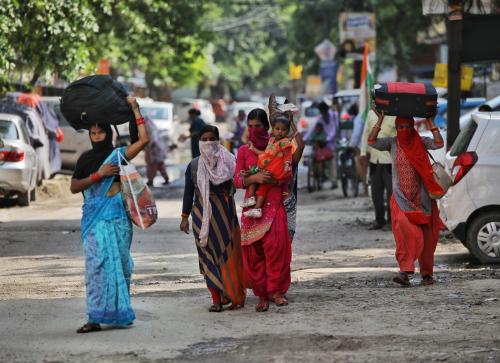 In other words, the beneficiaries of the social network are putting in their bit to sustain the system. Diya now works in the kothis — the high- end apartment complexes across the road. She is much valued for her excellent culinary skills. Deepak, meanwhile, rented an autorickshaw to ply passengers to and fro the local metro stations.

So, is this couple ‘living’ the change? We visited ground zero to find out: Diya’s quarters, my second trip in the last five years.

These places are quite basic — bordering on ugly, single room sets with shared toilets. Monochromatic and dull. Diya’s is no exception. At least at the first glance. A closer look reveals neatly ironed sets of school uniforms.

Then I see the girls sprawled on the floor pouring over a smart phone: Diya had called three of her nieces to Gurugram and admitted them in the local school.

“English medium schools, mind you,” she clarified. “These are the government-aided private schools attended by children from the kothis as well.”

The girls took turns to attend online classes. Diya’s quarter buzzed with action. A little boy joined the crowd and sat in the tiny courtyard outside, reading out from a book, and closely supervised by one of Diya’s nieces.

“This is Bodhi from the kothi I work in. He takes tuitions from Priya. He is such a brat, only she can make him do things”. Diya glowed with pride. I could not take my eyes off Diya’s kitchenette. It had transformed into a scrupulously scrubbed corner from a smoke-spewing, tear-inducing hole since my last visit. It had a squeaky clean burner and a neatly stacked gas cylinder.

Ever since I, inspired by the government’s appeal, gave up my share of subsidies on cooking gas, I have often wondered if mine had reached its intended destination. Now I knew it had.

If only I could end my story here: Shortly after my visit, the world was pulled down by the novel coronavirus disease (COVID-19) pandemic and everything else lost relevance.

The story of Diya, Deepak and their community was no longer exclusive. It had merged with those of the lakhs of migrant workers who lost their jobs and were evicted by their landlords.

The Jharkhandis learnt that a toothless safety net could do little for the people it represented. The gates of the kothis were shut down abruptly and the domestic staff asked to go on indefinite leave.

Should they be paid their due right away? Should they be offered an advance sum to tide over this ‘indefinite’ period? None of these questions were on behalf of the people. And of course nothing was volunteered.

Diya is now unemployed. And Deepak’s auto rickshaw is parked at home; his work came to a grinding halt along with the metro rail services.
But there appears to be light at the end of tunnel.

The Indian narrative concerning COVID-19 has got inextricably linked to the epic journey of the home-bound migrant workers. The global community has the images of the great exodus etched in its psyche.

Meanwhile, the Indian government has been trying to activate a set of counter-measures to salvage the situation. It came up with an array of welfare projects and employment schemes, specifically targeting the migrant workers. Most of these were mega projects equipped with large outlay and impressive goals.

I decided to make a special visit to Diya’s quarters, looking forward to a discussion on future plans. Diya was strangely quiet as she cleaned her mud chulha. She asked, “Do these projects come with guarantee of delivery?”

As it turned out, Diya was unaware she was entitled to subsidised gas cylinders. So were the rest of the women of her community.

“On the contrary, most of the time I have to pay double the price of a cylinder because the bhaiyas of the gas station who arrive with the delivery truck everyday almost always run out of supply midway. Then they would bring out the cylinders stashed away at the back of the truck and sell them to us at a premium,” she said.

Diya was miffed. But who can blame her?

But this time the government really meant business, I insisted.

“Yes, just like the notice we got from the state government assuring us that our children were entitled to all facilities offered to the rest of the students? I received another notice from school telling us to make arrangements for the transportation ourselves. The sirs and madams of the kothis were concerned about the over-exposure of their children to their classmates from the wrong side of the town.”

Diya laughed at my horror.

I walked back, my mind full of disturbing thoughts. They were not about cooking gas and subsidies.

I was thinking about Diya as I used to once know her — spirited and full of infectious energy. A far cry from the angry skeptic I had just encountered. Diya and millions of others like her are unemployed, and hence, deeply unhappy. A collateral damage our democracy can ill afford.