Good Economics from Hard Times: No one leaves home unless... 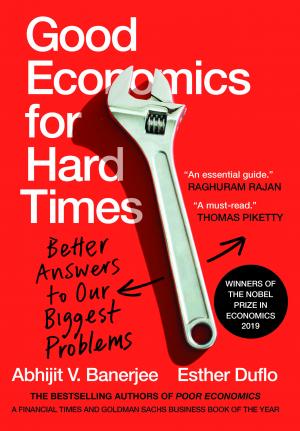 Migration is big news, big enough to drive the politics of much of Europe and the United States. Between President Donald Trump’s imaginary but enormously consequential hordes of murderous Mexican migrants and the anti-foreigner rhetoric of the Alternative for Germany, the French Rassemblement National, and the Brexit crew, not to mention the ruling parties in Italy, Hungary, and Slovakia, it may be the single most influential political issue in the world’s richest countries. Even politicians from the mainstream European parties are struggling to reconcile the liberal traditions they want to uphold with the threat they see across their shores. It is less visible in the developing world, but the fights over Zimbabwean refugees in South Africa, the Rohingya crisis in Bangladesh, and the citizenship bill in Assam, India, have been equally frightening for those who are its targets.

Why the panic? The fraction of international migrants in the world population in 2017 was roughly what it was in 1960 or in 1990: 3 percent. The European Union (EU) on average gets between 1.5 million and 2.5 million non-EU migrants every year from the rest of the world. Two and a half million is less than one half of one percent of the EU population. Most of these are legal migrants, people with job offers, or those who arrive to join their families. There was an unusual influx of refugees in 2015 and 2016, but by 2018 the number of asylum seekers to the EU was back to 638,000, and only 38 percent of the re- quests were granted. This represents about one for every twenty-five hundred EU residents. That’s it. Hardly a deluge.

Racist alarmism, driven by a fear of the intermingling of races and the myth of purity, doesn’t heed facts. A survey of 22,500 native respondents from six countries where immigration has been a defining political issue (France, Germany, Italy, Sweden, the United Kingdom, and the United States) revealed massive misperceptions about the number and composition of immigrants. For instance, in Italy, the actual share of immigrants in the population is 10 percent, but the average perception of that share is 26 percent.

Two recent experiments show this is a winning electoral tactic, even in a world of systematic fact-checking. In one study in the United States, researchers worked with two sets of questions. One set aimed to solicit respondents’ opinions about migration, the other their factual knowledge of the numbers and characteristics of migrants. Those who answered the fact-based questions first, before being asked their opinion (and thus reminded of their own distorted perceptions about migrants) were significantly more likely to be against immigration. When they were told the true numbers, their sense of the facts changed, but not their bottom-line views on immigration. In France, a parallel experiment found something similar. People deliberately exposed to Marine Le Pen’s false claims were more likely to want to vote for her. Sadly, this persisted after her statements were fact-checked in front of them. Truth did not sway their opinions. Simply thinking about migration makes people more parochial. The facts aren’t allowed to get in the way.

There is an important reason why facts are ignored, and it is based on a piece of economics seemingly so utterly self-evident that many find it impossible to think past it, even when the evidence says the opposite. The economic analysis of immigration often comes down to a seductive syllogism. The world is full of poor people who would obviously earn a lot more if they could find their way here (wherever that might be), where things are clearly much better; therefore, given half a chance, they will indeed leave wherever they are and come to our country, and this will drive down wages and make most of us already here worse off.

What is remarkable about this argument is its faithfulness to the standard exposition of the law of supply and demand, as taught in high school economics. People want more money and therefore will all go wherever wages are highest (supply goes up). As the demand curve for labor slopes down, the rise in the labor supply will lower wages for everyone. The migrants may benefit, but the native workers will suffer. This is the sentiment President Trump tries to capture when he insists the country is “full.” The reasoning is so simple it can fit on the back of a very small napkin, as in: 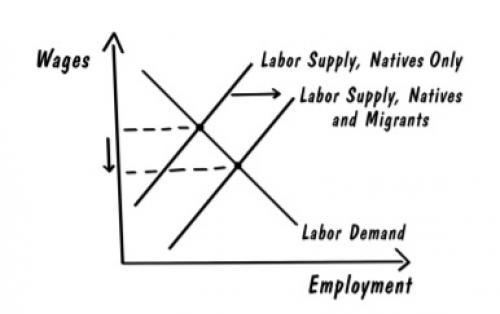 The logic is simple, seductive, and wrong. First, wage differences between countries (or locations, more generally) actually have relatively little to do with whether or not people migrate. While there are obviously many people desperate to get out from wherever they are, as we will see, the enduring puzzle is why so many others don’t move when they can.

Second, there is no credible evidence that even relatively large inflows of low-skilled migrants hurt the local population, including members of the local population most like the migrants in terms of skills. Indeed, migration seems to make most people, migrants and locals, better off. This has a lot to do with the peculiar nature of the labor market. Very little about it fits the standard story of supply and demand.

no one leaves home unless
home is the mouth of a shark
you only run for the border
when you see the whole city running as well
your neighbors running faster than you
breath bloody in their throats
the boy you went to school with
who kissed you dizzy behind the old tin factory
is holding a gun bigger than his body
you only leave home
when home won’t let you stay.

She was clearly onto something. The places people seem most desperate to leave — countries like Iraq, Syria, Guatemala, and even Yemen — are far from being the poorest in the world. Per capita income in Iraq, after adjusting for differences in cost of living (what economists call purchasing power parity, or PPP), is about twenty times that in Liberia, and at least ten times as high as in Mozambique or Sierra Leone. In 2016, despite a dramatic fall in income, Yemen was still three times richer than Liberia (there is no data for more recent years). Mexico, President Trump’s favorite target, is an upper-middle-income country with a much praised and widely imitated welfare system.

Those trying to get out of such places probably don’t face the grinding extreme poverty the average Liberian or Mozambique resident faces. It is more that they find life intolerable because of the collapse of everyday normality: the unpredictability and violence brought upon them by the drug wars in Northern Mexico, the horrible military Junta in Guatemala, and the civil wars in the Middle East. A study from Nepal found that even bad years in agriculture didn’t drive many Nepalis out of the country. In fact, fewer people left in bad years because they could not afford the trip out. It is only when the violence from Nepal’s long-standing Maoist insurgency flared up that people started leaving. They were running from the mouth of the shark. And when that happens, it is almost impossible to stop them, because in their minds there is no home to return to.

Of course, there is also the opposite: the ambitious migrant who needs to get out at all costs. This is Apu, the protagonist of Aparajito, the second of Satyajit Ray’s wonderful Apu trilogy, caught between his lonely mother in their village home and the many exciting possibilities offered by the city. This is the migrant from China who works two jobs and scrimps and saves so his children one day can go to Harvard. We all know such people exist.

And then there are the people in the middle, the vast majority who don’t face extreme internal or external compulsions to move. They do not seem to go chasing after every extra dollar. Even where there are no border checks and no immigration agents to dodge, they stay where they are, in the countryside, for example, despite the large wage gaps that exist within the same country, between rural and urban areas. In Delhi, a survey of slum dwellers, many of them recent migrants from Bihar and Uttar Pradesh, the two enormous states to the east of Delhi, found that after paying for housing, the average family lived on slightly over $2 a day (at PPP).11 This is much more than the bottom 30 percent in those two states, who live on less than $1 a day at PPP. Yet the rest of the very poor people (of whom there are about a hundred million) have not opted to move to Delhi and more than double their earnings. It is not only in developing countries that people do not move to take advantage of better economic conditions. Fewer than 350,000 Greeks are estimated to have emigrated between 2010 and 2015, at the height of the economic crisis that shook their country. This represents at most 3 percent of Greece’s population, despite the fact that the unemployment rate was 27 percent in 2013 and 2014, and Greeks, as members of the EU, are able to work and move freely within Europe.