As GST reforms excite market, fiscal correction to curb pollution and energy impacts of new growth must remain the priority 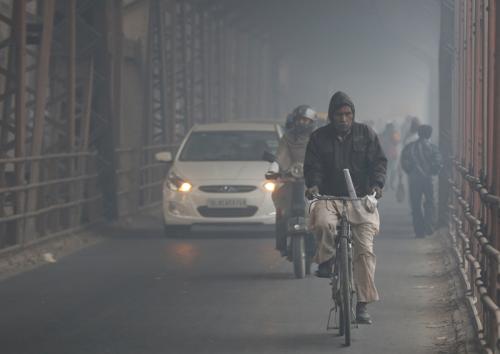 The constitutional amendment to facilitate the Goods and Services Tax (GST) has brought lot of cheer in the market. Naturally! GST will subsume all indirect taxes of the Centre and the states, remove cascading impact of multiple taxes to reduce tax burden and make way for a common market. So far so good. What about effective fiscal signals to discourage polluting goods and services? Or tax the bad to fund the good? When globally that is the way forward for sustainable growth, the hyper conversation around GST is quite mute on this.

What matters most from the standpoint of an environmentally responsible fiscal regime is the high sin/demerit tax and the rates worked out in public interest. The recommendations of the Arvind Subramanian Committee Report on the Revenue Neutral Rate and Structure of Rates for the Goods and Services Tax, gives hope that fiscal restraints on polluting goods and services are a possibility within the GST framework. This report recognises that “there is a growing international practice to levy sin/demerit rates in the form of excise outside the scope of GST on goods and services that create negative externality for the economy. These include carbon taxes, taxes on cars that create environmental pollution and taxes to address health concerns.” But this principle is not explicitly articulated in the amendment bill.

In fact, the Subramaniam report has stated clearly that “such demerit rates—other than for alcohol, petroleum and tobacco will have to be provided for within the structure of GST.”  The proposal of the committee to have one demerit rate of 40 per cent for luxury cars, aerated beverages and tobacco products is narrow in scope and is being widely read as tax on luxuries. This needs to be a dynamic strategy for a much broader mix of polluting goods and services.

The entire GST reform process has to clearly take cognizance of this principle so that eventually, tax measures are framed to effectively offset pollution and health impacts of growth. The new constitution amendment confers powers on the government of India to exempt goods and services from taxes wherever it thinks necessary “in the public interest”. The GST Council can decide “any other matter related to GST”. Therefore, the principle of incentive and disincentive has to be on table. The environment and development discourse has already exposed severe market distortions that make India vulnerable to high pollution and energy guzzling.

GST conversation is also weak on the potential use of targeted cess and differentiated taxation based on the polluter pay principle. Currently, there is a cess on per tonne of coal to create clean energy fund and higher infra-tax on diesel cars compared to petrol cars. There are social sector cesses too. At state level, the Delhi government imposes an environment cess on per litre of diesel to create Air Ambience Fund for pollution control. Several state governments have created urban transport funds with tax measures. These strategies are needed to scale up pollution control, meet the target of 100,000 MW of renewable energy generation and massive augmentation of public transport among others.

There also remains the larger agenda of correcting fiscal distortions that increase public health risk. For instance, the Supreme Court has put a red flag on public heath impact of increased use of dirty diesel in the transport sector especially in cars. Cheaper diesel fuel prices are responsible for this. If the taxes on petrol and diesel fuel are not equal then the governments will have to equalise the fuel tax for both petrol and diesel car owners. At the current rate of fuel taxes, the diesel car buyers need to pay at least an average of 20 per cent of the car price only to recover the extra fuel tax that petrol car users pay over the life time use of cars. This will have to be addressed within the GST framework. Industry should not end up using the argument of harmonised taxes to stop fiscal action on polluting goods.

In the GST reforms, barrier-free truck movement is a priority as trucks provide freight services and add to the input cost of goods. The Subramaniam Committee report has justified this based on studies that show trucks in India drive only one-third of the distance of trucks in the US. Only 40 per cent of the total travel time of the trucks is spent driving whereas check points and other stoppages are one quarter of the total travel time. If check point delays can be eliminated, trucks can travel for 6 more hours a day or 164 more kms on an average. Such delays increases inter-state trade costs by a factor of 7-16 hours. GST wants to cut this down.

Fair enough. Ultimately, time and kilometres savings may still depend on numerous private toll gates on highways under the PPP model that will replace the check points.

But there is bigger public health question. Air pollution management will require entry restrictions on polluting trucks—both physical and fiscal, in cities battling pollution. Delhi has seen significant reduction in truck pollution after the introduction of environment compensation charge on entry of each truck directed by the Supreme Court. With road-based freight transport becoming cheaper and easier—and more so after GST; with no commensurate investments in railways; and, awfully outdated emissions standards for trucks, highway pollution will continue to choke cities and kill people. Entry restrictions on trucks to cut pollution and congestion will remain a legitimate tool for a long time to come.

Will public transport service gain too?

Though there is no explicit reference to this anywhere, we certainly do hope that the barrier-free borders will work for public transport services as well. How state governments will roll out GST eventually is not known yet. But entry tax across cities and states makes public transport services expensive for the masses. Numbers of cars that enter Delhi daily are more than twice the total cars registered annually. Entry barriers make public transport more expensive. Personal cars occupy maximum road space, carry miniscule number of people and emit highest pollution per capita while upsetting the transport energy bill. All cars have what the economists dub as, high negative externality—pollution, public health, energy guzzling, congestion and inequity. How will this correction take place within the GST framework?

The principles of equity and larger public good are the compelling reasons to have none or minimal tax burden on public transport. The Subramaniam Committee Report mentions that different tax categories will need to consider equity. “Goods that account for a large share of expenditures of poorer households will typically be merit goods and will either be exempt or placed in a lower rate category”. Transport cost is nearly a quarter of the household expenditure of the poorer households. GST reform across states will have to work for public transport which is a public good.

Clearly, while fast-tracking reforms, the government cannot ignore fiscal measures that can be more cost-effective than command and control strategies to induce change and sway consumer choices towards cleaner options. Globally it has been proven that health and social benefits of enforcing tougher green regulations are several times higher in economic terms than the costs of complying with the rules.

Fiscal correction and reforms have to allow bolder roadmap to reduce pollution and energy impacts of new growth. The markets must work for the cleaning up job too.