Post a ban on small-scale coal mining, Meghalaya is investing its energy and enterprise in other sectors 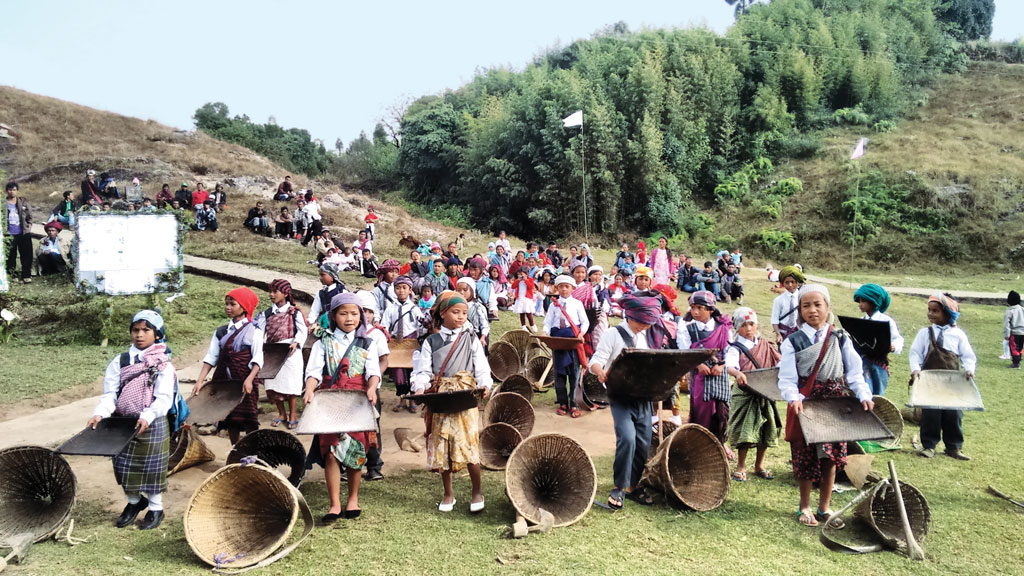 A performance at the food and biodiversity festival Indigenous Terra Madre in Pyrda village in Shillong. Meghalaya is promoting itself as a tourism hot spot (Photo: Karnika Bahuguna)

Just a week after Shillong hosted one of the most popular and widely attended music festivals, NH7 Weekender in October, the streets of Shillong were gleaming with promotional banners for a festival, to which India was a debutant host. The Indigenous Terra Madre, a fiveday conference held in November 2015, brought together indigenous tribes and saw over 600 delegates from 58 countries celebrate the knowledge of food, nutrition and biodiversity.

Post its popularity, Meghalaya has decided to organise the international food conference in 2018. A similar event targeting indigenous communities of northeast India will be organised this year followed by a conference focused on India, Bangladesh and Myanmar in 2017.

In the otherwise quiet and quaint hill state, these measures convey a dire need to earn revenue from tourism. In April 2014, the National Green Tribunal (NGT) banned rat-hole coal mining in Meghalaya, owing to environmental concerns. This left a hole to the tune of Rs 600 crore in the state’s annual revenue. Meghalaya’s total revenue in 2014-15 was Rs 1,885 crore and for the current fiscal ending March 2016, it is projected at Rs 1,347 crore, according to the state’s budget document. Since the mining ban caused a loss of more than a quarter of the revenue, Chief Minister Mukul Sangma said the state is exploring all other sources of income.

The NGT order also threatened the livelihood of about 100,000 people. More challenging than just finding other avenues of revenue is the task of reinventing the economy that was primarily dependent on small-scale coal mining. “We are looking at options which can...increase the earning capacity of the people and which invariably go a long way in creating a turnaround of the economy of a state where the resources are very limited,” Sangma told Down To Earth.

As an immediate measure to collect an additional revenue of Rs 30.91 crore in a year, the state raised taxes on diesel from 12.5 to 13.5 per cent and on tobacco products from 20 to 27 per cent in the budget for 2015-16. Not only did the state introduce cess on clinker at Rs 20 per tonne, it raised cess on limestone, fire clay and sillimanite. Meghalaya also raised value-added tax to 14.5 per cent to generate another Rs 25 crore annually, besides cutting non-plan expenditures on departments.

Sangma says the state will focus on hospitality, education and health to reinvent the economy. Meghalaya aims to become a high-end tourism spot by leveraging its strengths­­—its landscape and culture. That means a boost to adventure sports, local festivals, wellness and herbal tourism. The state has a development plan outlay of Rs 107 crore for the current fiscal for its hospitality sector against Rs 24 crore in 2014-15.

The state plans to seek investments through public-private partnership (PPP) in the education and health sectors as ancillaries to promote tourism. Its planned expenditure on health has consecutively been at Rs 380.50 crore for two fiscals, showing 65 per cent growth from Rs 230 crore budgeted for the sector in 2013-14.

According to Sangma, Meghalaya will leverage opportunities in its universal health insurance scheme for attracting private sector investment, while providing wider healthcare options to citizens. Under the Megha Health Insurance Scheme, beneficiaries can get treatment in certain identified hospitals. This can be extended to any private hospital.

Meghalaya has already implemented the PPP model in certain primary and community health centres. Under the existing model, the management and operation of some of the poorly performing community and primary health centres is assigned to NGOs and corporate agencies. Good news is that a 2012 study on the PPP model in 32 health facilities in Meghalaya showed improved facilities and functioning of the health centres following takeover by NGOs. Funded by Delhi-based National Health Systems Resource Centre and the Regional Resource Centre, Guwahati, the study also showed that the quality of healthcare was suspect due to insufficient skills and access to training programmes.

Education has also received a thrust as seen in the rise in budgetary allocation from Rs 420.60 crore to Rs 681.88 crore in 2015-16. Besides setting up two engineering, medical and arts and commerce colleges each, Meghalaya plans to set up three international schools. The state is eyeing a reputation of being an educational hot spot as well as a tourist attraction that hill destinations like Udhagamandalam (Ooty) enjoy. “If you look at the children of well-to-do families, who are spending huge amount of money for...this level of education, why should we not take advantage of this kind of opportunity?” he asks.

Chief Secretary P B O Warjri thinks that extending various programmes to affected areas will take time as switching people quickly from one livelihood to another is not easy. The state government’s plans will be helpful in generating revenue but may not necessarily provide a substitute for those who lost their livelihood, says Nirankar Srivastav, professor at the department of economics, North East Hill University in Shillong.

“Unless there is an expansion in the economy, there will not be a permanent solution. There is a need for opportunities to open up. It has to come from within the society as well as some external resources like private investment. Government efforts alone will not serve the purpose,” he says. Hasina Kharbhih of Impulse NGO Network, a non-profit which combats human trafficking, suggests extending the Mahatma Gandhi National Rural Employment Guarantee Act and implementing its flagship scheme, Integrated Basin Development and Livelihood Promotion Programme, aimed at local economic development to promote livelihood security in the affected areas. Until the state gets its draft mining policy approved to regulate mining activities, Meghalaya needs to look for an alternative to black gold.