Like terrorism, jobless growth continues in India irrespective of who is in power. To tackle it, we need not cross borders 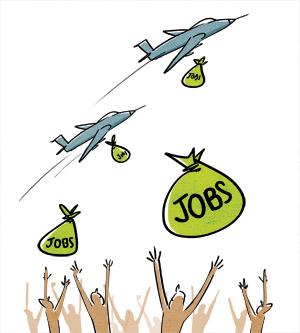 Recently, the Labour Bureau released its findings from the annual household survey on employment. India’s economy grew at 7.1 per cent in the first quarter of 2015-16, one of the world’s fastest. But our unemployment rate is 5 per cent, a five-year high.

For a country where more than 65 per cent of the population is eligible to join the workforce, it is bad news. Further, India’s employment sector remains highly unorganised; only 10 per cent of total employment comes from the organised sector. This makes the employment scenario more complicated. But is all this new to us? No.

The trend of jobless growth started in 2004, and still continues. It was in 2004 that the previous National Democratic Alliance (NDA) government was routed until it came back to power with a historic majority in 2014. In-between, the United Progressive Alliance ruled for two five-year terms. The NDA led by Prime Minister Narendra Modi has promised 10 million jobs a year. After two years in power, his promise seems to be difficult to keep. But he was right in 2014 while campaigning for elections that the decade preceeding suffered jobless growth. In 2011, the National Sample Survey Office (NSSO) released data on employment. It showed that during 2004-05 and 2009-10, only one million jobs were added per year. During this period, the Indian economy grew at 8.43 per cent annually, a historic high.

So how is Modi going to fix this problem? His recent aggressive postures against cross-border terrorism that included the much-talked-about “surgical strikes” across the Line of Control have not only propelled his image as an action-oriented leader but also as someone who keeps promises. Like terrorism, jobless growth is also a problem which continues across governments. Politically, unemployment is more lethal than terrorism.

That is the reason Modi seems to be equally serious about jobless growth. In two recent television interviews, he spoke about employment and jobless growth. In his typically optimistic style, he declared that his recent employment-creation programmes would lead to more jobs. These include: Start up India, Digital India, the MUDRA or Micro Units Development & Refinance Agency Ltd. scheme, Make in India (for the manufacturing sector), and boosting infrastructures that create jobs. In all these programmes he sees economic growth trickling down and creating jobs. But will these programmes help create jobs proportionate to economic growth?

Optimism is not always a good guide for the economy. Not just in India but also across the globe, the employment creation potential of Gross Domestic Product is coming down. Still, India’s employment elasticity is least in the world, according to Arun Maira, member of the erstwhile Planning Commission. According to his recent blog post, it has been less than the global average from 2000 to 2010. The average employment elasticity of the global economy was 0.3 in this period, while India’s was only 0.2, he wrote. Although there are various reasons for this, the most important one is automation of economic activities in key sectors. Add to it, the unequivocal focus on creating jobs from only industrial/services sectors and ignoring traditional sectors like agriculture which still create the maximum employment in the unorganised sector.

This means Modi has to shift the focus from programmes already in place to create jobs and absorb the demand of 12 million people joining the workforce every year in India. Agriculture may be stagnating, but its employment potential remains high. Padded with alternative jobs at village level, it will substantially increase employment in villages, where the maximum demand for jobs will emerge. So, it is all about rethinking the job creation formula instead of reinventing it. For this, one need not cross the border; just think in India.