The murder of workers' unions

The case of Maruti workers reflects the anti-labour stance of companies, governments and media 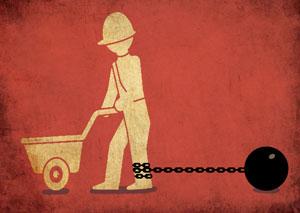 There was a time when workers were heroes in this country. It was a golden period that started with the hope of a newly-independent nation and lasted a couple of decades, perhaps more. The films of that era reflected this perception. Plots usually featured a factory hand who stood up against the seth (owner) and his violent henchmen. Sometimes, the seth would see the light—that exploitation and unfair practices hurt everyone—and have a change of heart. My earliest memory of this is the 1959 Dilip Kumar classic Paigham where the conflict ended on a happy labour-and-capital-must go-hand-in-hand note. Later, Sagina Mahato brought together the more complex story of the Left capture of trade unions (TUs) and the helplessness of the worker.

Over the decades, specially after the country’s opening up to global capital, the worker and more so TUs have become the villains. Every government since the 1990s has made reform of labour laws, a fig leaf if ever there was one, a priority. Part of the blame for this must rest with the Left which focused on getting its strength in numbers from the organised sector while ignoring the huge mass of workers in the unorganised sector (93 per cent). Now, of course, the Bharatiya Janata Party-affiliated "nationalistic" Bharatiya Mazdoor Sangh has overtaken the Left as the largest central TU but the narrative has not changed. TUs continue to be opposed by companies with the active support of governments.

The Maruti case is symbolic of this. On March 10, 2017, after five harrowing years, a sessions court acquitted 117 jailed workers, who were refused bail, and convicted 31 workers. Of the 13 sentenced to life term, all but one are the top office bearers of the Maruti Suzuki Workers Union. The trouble started in July 2012 when a permanent worker at the Manesar plant was suspended. Even as the union was negotiating with the company, there was widespread violence and senior Maruti officials were attacked with brute force, resulting in the death of the human resources general manager. Was it the workers who went berserk? They deny this and claim there was a posse of private security men in the factory. In the subsequent police action, 148 workers were rounded up and jailed. The management turned vicious, sacking nearly 500 permanent workers and harassing others.

Why was there so much unrest at Manesar? It’s well known that from 2010, there had been constant friction over recognition of the workers’ union. At the same time, as has been happening across India, the majority Japanese-owned factory began hiring more and more contract workers at a time when the workload had increased and wages were at a standstill. Attempts to negotiate a wage increase were turning fractious.

Hardly any of this featured in most media reports on the violence. Journalists readily bought the official version and criticised the workers for damaging the country’s economic prospects. The pink press and its high- profile editors have always held labour laws responsible for shackling the economy, glossing over the fact that no law has ever really stopped a factory from firing labour at will.

Industry, government and media need to shed their prejudices, nay animus, against TUs and use them as a tool for a productive and happier workforce. We need a radical rethinking on TUs. We need a complete overhaul of the way unions function and how managements allocate resources for worker skilling. Workers need to develop a more enlightened leadership and learn better ways of bargaining. They also have to understand how to get everyone on board, not just union members but also the larger community which harbours a negative image of TUs. Workers need to have unions. Managements need good workers and the community needs to benefit. It’s the simple truth. And political parties, which use TU numbers to flex muscle, must change their ways.