Wealth, inequality and children’s right to survival in India 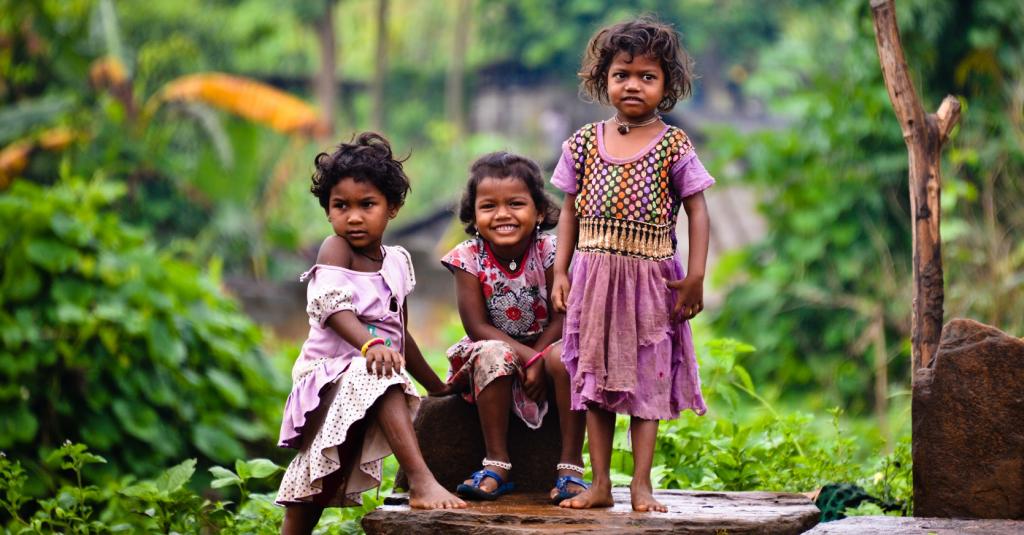 The Credit Suisse Research Institute’s Global Wealth Report 2018 places India’s total wealth at Rs 3,881.8 lakh crore. Out of this, the wealth equivalent to Rs 3,012.28 lakh crore (78 per cent) was under the control of the wealthiest 20 per cent of India.

The next 40 per cent persons possessed wealth equivalent to Rs 869.52 lakh crore (22.4 per cent). This segment is known as the “middle class” of India, which considers remittances of Equated Monthly Instalments for two-wheelers, four-wheelers, HD Television and Home Loans as life’s biggest aims. This class of people does not consider environment, drying up of rivers, increasing violence, communalism and democratic values as matters of prime concerns.

The poorest 20 per cent of the country are not only deprived of wealth, their (170 million persons) wealth is rather negative at Rs 34 lakh crore, as one derives from the Credit Suisse 2018 Report. This report also informs that the wealthiest one per cent adults in India have wealth equivalent to Rs 997.6 lakh crore. It means that these one per cent Indians possess control over the total wealth of 80 per cent of Indians. Therefore, it is natural for the question to arise as to what freedom or public welfare can be expected from a dispensation that ignores this phenomenon. Is it a mark of good economic policy that 1.34 billion people are made the colonial subjects of the one per cent capitalists? 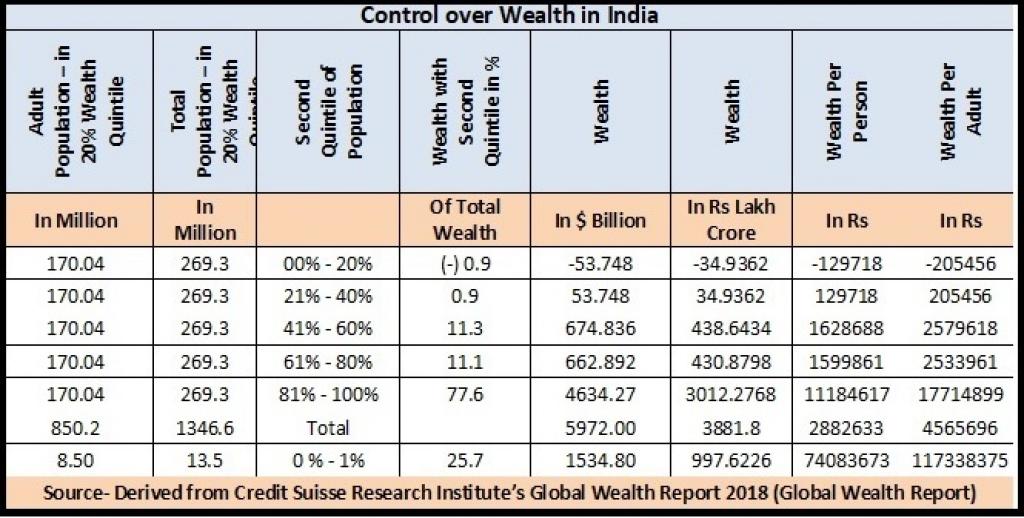 Impact of Inequalities on children and their well-being 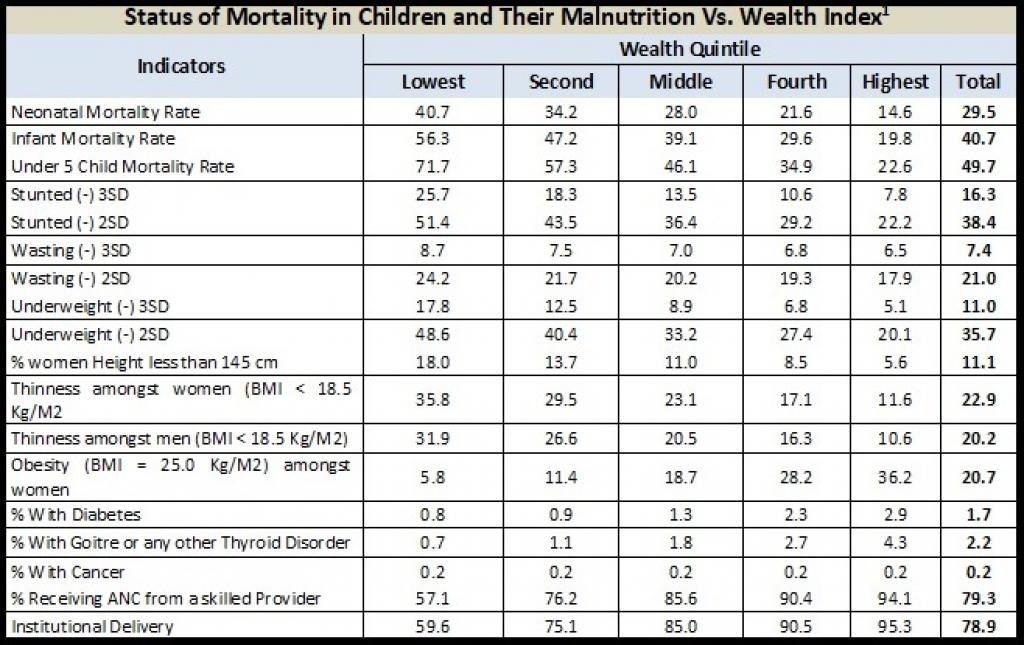 Wealth inequality also shows up in indicators such as 'Severe Stunting', 'Severe Wasting' and 'Severe Underweight'. Also, it is notable that women’s Body Mass Index (BMI) is poorly placed (below 18.5 Kg/M2) for 35.8 per cent women of the lowest wealth quintile as compared to the 11.6 per cent among those at the highest wealth quintile.

Linkages of education with malnutrition, child mortality and domestic violence

Malnutrition and education of women too appear to be closely linked. The results of NFHS — 4 indicate that children of women who had 12 or more years of schooling, had severe stunting at 8.7 per cent, in contrast to 24.8 per cent of children born to women who had no education at all. Similar findings are seen for chronically undernourished children, where the corresponding figures of stunting are 23.8 per cent for women having had 12 or more years of schooling and at 50.7 per cent for those without education. 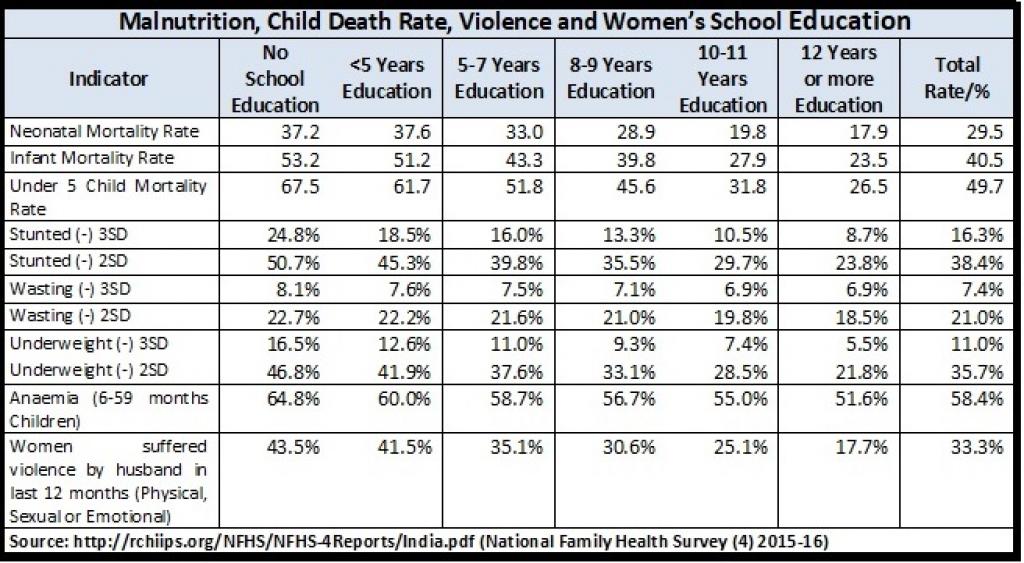 Apparently, economic policies for India’s development are serving the few “haves” among whom wealth is concentrated. The state intent is not really addressing the creation of a mechanism that renders equitable distribution of resources and opportunities. The definition of “development”, which the country is pursuing, is manifesting in unemployment, food insecurity, crisis of health, deterioration of quality in education, commercialisation of services and extreme economic poverty.