'Large hydropower projects are not safe'

Experts discuss about the negative impacts of building large dams 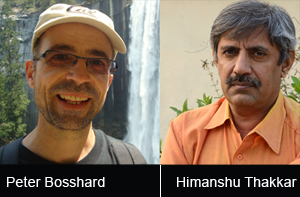 Hydroelectricity is synonymous with green power generation. But you are saying that dams emit methane and are not good for the environment. What is then the solution ahead to reduce dependence on thermal power?

Large hydropower projects are neither cheap nor green. Looking at project samples from the past 70 years, researchers at Oxford University found that hydropower dams have average cost overruns of 96 per cent, which (on an average) makes them uneconomic.

Due to dam building, freshwater ecosystems are more affected by species extinction than marine or land-based ecosystems, having on an average lost 76 per cent of their population since 1970.

Climate change is a huge threat because of its impacts on critical ecosystems that are threatened by dam building. Even if hydropower reservoirs did not produce methane, damming up rivers to mitigate climate change would amount to sacrificing the planet’s arteries to save her lungs.

Our analysis shows that hydro power generated per mw installed capacity in India has gone down by 20 per cent in the past two decades.

There is no agency in India to monitor as to how much of the power generation from hydro is providing peaking power.

Our former Prime Minister Jawaharlal Nehru had once called dams “temples of modern India”. But given India’s recent flood history (Uttarakhand, Kashmir and now Chennai) do you think that dams are safe for our country?

I note that later in his life, PM Nehru had also warned of the “disease of giganticism” in the water and power sector. In a speech in November 1958, Nehru had talked about this disease of gigantism plaguing the Indian water establishment, thus advocating for smaller projects.

Large hydropower projects are not safe, not only considering the recent flood history, but also for other factors as well.

Dams and wind turbines both have their share of problems (the latter affects birds, marine animals). What then is the future of renewable energy?

Our energy future clearly lies in solar, wind and micro-hydropower. The beauty of these energy sources is that as prices fall, they are so bountiful that you can restrict development to areas that are not populated, forested or protected as natural habitats and still cover most of our future energy needs.

At this point wind and solar energy, which are intermittent, still need to be balanced by other sources of electricity such as hydropower.

Ranjit Deshmuk and Grace Wu, two researchers from University of California, Berkeley, have shown that with smarter grids and regional integration, wind and solar energy can cover most of the future electricity needs of sub-Saharan Africa. We are confident that the same is true for South Asia and other regions.

China and India are engaged in a dam building race that hurts ecosystems, local populations and regional stability.

Neither China nor India acknowledges that it is really the indigenous populations of the region that have first user rights on the rivers of the Himalayas.

Neither China nor India acknowledges that upstream countries have obligations vis-a-vis downstream riparians (be they India for China, or Bangladesh for India) under a new United Nations convention and customary international law. We encourage the governments of both the countries to recognise that river management and protection are best achieved at a basin-wide rather than national scale. They need to respect local rights and integrate all social, environmental and economic concerns.

It was all these factors and more. Both construction and operation of dams and hydropower projects have increased the flood and disaster vulnerability of Uttarakhand and the Himalayas.

The increased frequency of high and intense rainfall events, melting of glaciers, glofs and morrain left behind by the receding glaciers, the inherent fragility of the mountains, the blasting and tunnelling, the deforestation, all are multiplying the risks.

Our inability to provide proper forecasts, nor use available forecasts, nor have a functioning disaster management mechanism, our abysmal record in doing any credible environmental-social impact assessments, non-existent public consultations, poor appraisals, non-existent capacity to monitor or achieve compliance are among the other factors.

India’s groundwater is fast depleting. Given the prediction that the country will face more and more droughts in the future (due to climate change), what is the solution towards ensuring water sustainability?