Can biomass co-firing offer a viable solution to coal shortage and stubble burning? 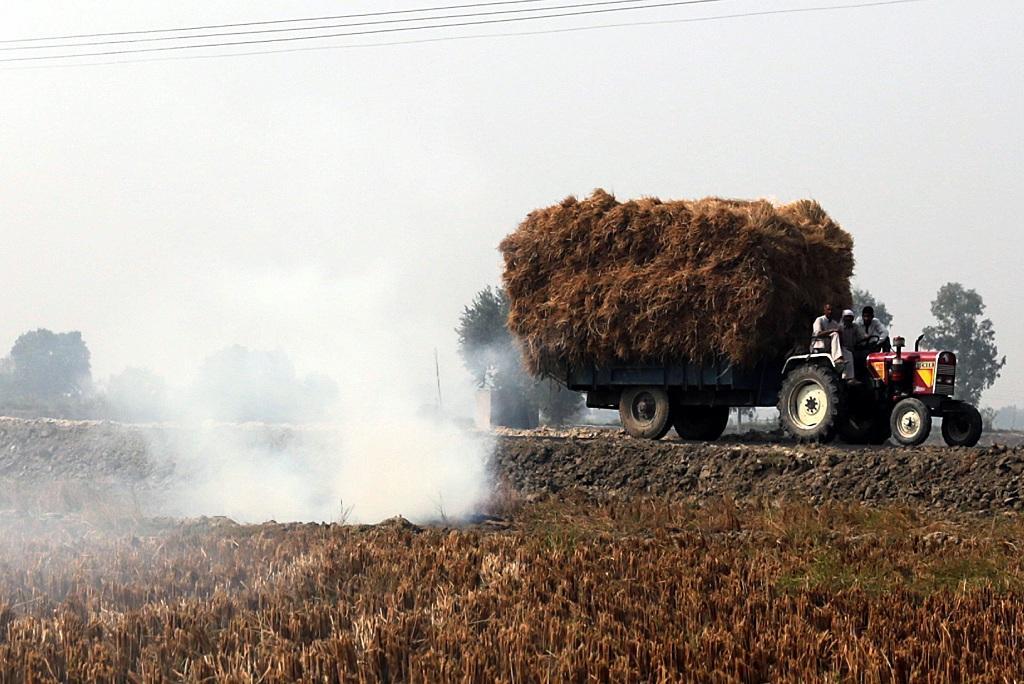 The Government of India (GoI) has made it mandatory for thermal power plants in three categories to use a 5 per cent blend of biomass pellets and coal. The policy will come into effect in October 2022, with a requirement to increase the blend to 7 per cent within two years for two categories of plants.

The co-firing policy will be in effect for 25 years or till the useful life of the thermal power plant, whichever is earlier.

India's economy is on the path to recovery since the second wave of the novel coronavirus disease (COVID-19) pandemic. The first half of October saw a 4.9 per cent increase in electricity consumption compared to September.

However, coal supply fell short of demand by 1.4 per cent. The government reported a shortage in coal supply despite abundant reserves.

Several factors contributed to this, including an increase in electricity demand due to the recovery of the economy (and the festival season), rains in coal-mining areas and insufficient stocking of coal before the monsoon season. Moreover, global energy prices are on the rise. The factors combined resulted in outages in several states.

India has shown rapid growth in installed renewable energy capacity. The country still relies heavily on coal-based power generation to meet most of its electricity demand.

The power sector contributes nearly 50 per cent of the sector-wise carbon dioxide (CO2) emissions. Coal and coal-based power is the single-largest contributor of CO2 emissions in India, according to the International Energy Agency (IEA).

CO2 emissions based on sector and fuel usage in India

Efforts to ensure 24x7 power supply to all grid-connected households will mean a significant increase in coal-powered electricity and CO2 emissions. Coal imports will also rise, which will increase energy security concerns.

In India, the government is committed to ensuring that all grid-connected households have 24x7 access to reliable power. The result will be a significant increase in coal-fired power generation and CO2 emissions. Coal imports will also rise, which will increase energy security concerns.

Source: Office of the Coal Controller, Ministry of Coal

India declared its Nationally Determined Contribution goals for 2030 in the 2015 United Nations Climate Change Conference to limit global warming to well below 2 degrees Celsius (preferably 1.5°C) from pre-industrial levels. The country ratified the same in October 2016.

It includes lowering the emissions intensity of its gross domestic product by 33-35 per cent compared to 2005 levels by 2030 and also increasing cumulative electricity generation from renewable energy sources to 40 per cent by 2030.

India must reduce coal-based GHG emissions rapidly to meet the NDC goals. Coal plants with higher emissions will be shut down and replaced with cleaner ones soon.

How prudent is it for India to construct new coal power plants at this time, given that countries around the world have stopped investing in coal-fired power plants?

Biomass co-firing has been shown to reduce coal power plant carbon footprint in Europe, the US and the United Kingdom, according to a report by the International Energy Agency (IEA).

Biomass pellets made from agricultural waste have equivalent calorific value to that of Indian coal, based on estimates from the Central Electricity Authority (CEA).

In the past decade, crop residue burning has caused terrible pollution in northwestern India, especially in Punjab, Haryana and Uttar Pradesh.

Around 85 to 100 million tons of crop residue have been burnt in recent years, despite various government policies aimed at reducing crop burning.

Co-firing biomass pellets with coal in India is a promising strategy for reducing GHG emissions from coal-based power plants. In places where agro-residue burning is prevalent, this can result in a reduction of coal dependence and a sharp decline in pollution levels.

Farm fires have already begun in Punjab and Haryana.

Stubble burning in Punjab and Haryana as of October 11, 2021

The red dots indicate the number of fires in the area. Each dot corresponds to one of the several areas where the fire is located. Source: NASA Satellite Image

In contrast to last year, there are no apparent differences in the number of fires.

In October, rice is harvested and rabi crops must be planted within a few days after removing crop stubble.

In earlier days, only a small portion of the stubble was burned. However, in recent times, labour shortages, increased use of harvester technology (which leaves a longer stubble) and lack of market linkages to maximise residue use have all contributed to a significant rise in crop residue burning.

In India rice, wheat and sugarcane alone contribute nearly 80 per cent of the agro-residue.

India is largely agrarian, with around half its population engaged in farming.

Nearly 550-650 million tonnes of gross agro residue is generated in India. Of this, 160–190 million tonnes is available for bio-energy, according to the Union Ministry of New and Renewable Energy (MNRE) website.

Crop residue burning releases sooty black carbon, which is a major contributor to climate change. CO2 and other emissions under various agro-residue use scenarios have been analysed.

The potential for utilising agro-residue varies from zero to almost 100 per cent. NOx and SO2 emissions decrease with an increase in blending percentage. 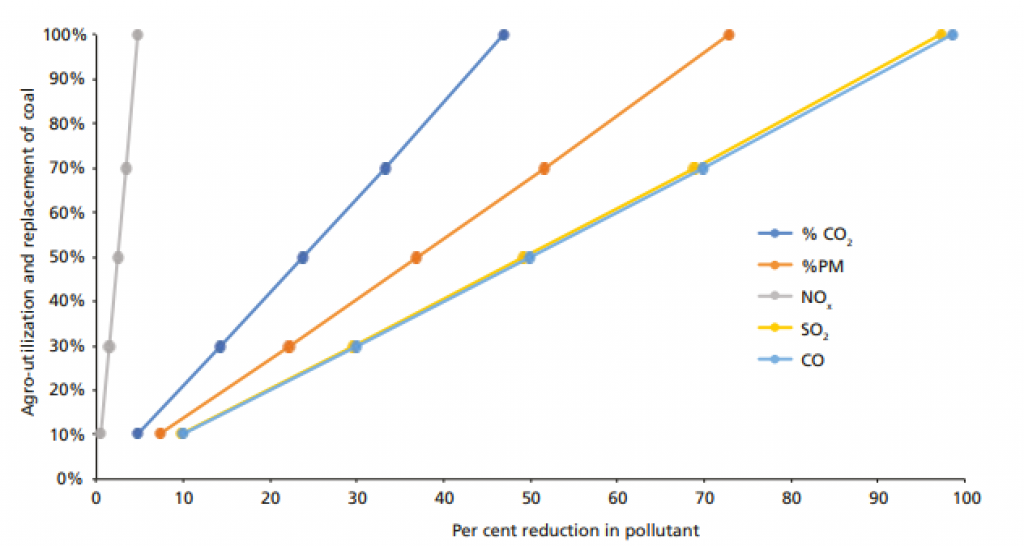 For this Calculation, agro-residue burning is not considered carbon neutral. NOx emissions reduction is dependent on the firing technology and properties of the biomass used. Source: Centre for Science and Environment, 2020

A stand-alone solution to these two problems (stubble burning and coal generating power) will burn a hole in the exchequer’s pocket, and even afterward, returns on investment will not be guaranteed. What if we were to see the broader picture and make one problem the solution to another problem?

This resource cannot be ignored, with around 50 per cent of the population engaged in agriculture.

Agro-residue co-firing in older power stations can solve the government's plethora of problems. An effective method to address pollution and mitigate climate change is to identify older units that are operating efficiently and to promote their co-firing with biomass.

Pellet and briquette manufacturers’ factory-gate prices for agro residue range between Rs 2-2.5 per kilogram (Rs 2,000-2,500 per tonne). Prices vary significantly with the type of crop residue.

This cost is mainly made up of labour costs associated with collecting agro-residue from the fields, loading and unloading it as well as transporting it. After deducting the labour and transport costs, farmers can earn between Rs 500-Rs 1,500 per tonne of crop residue.