Electric vehicles in India: Can we protect the environment & also help the economy 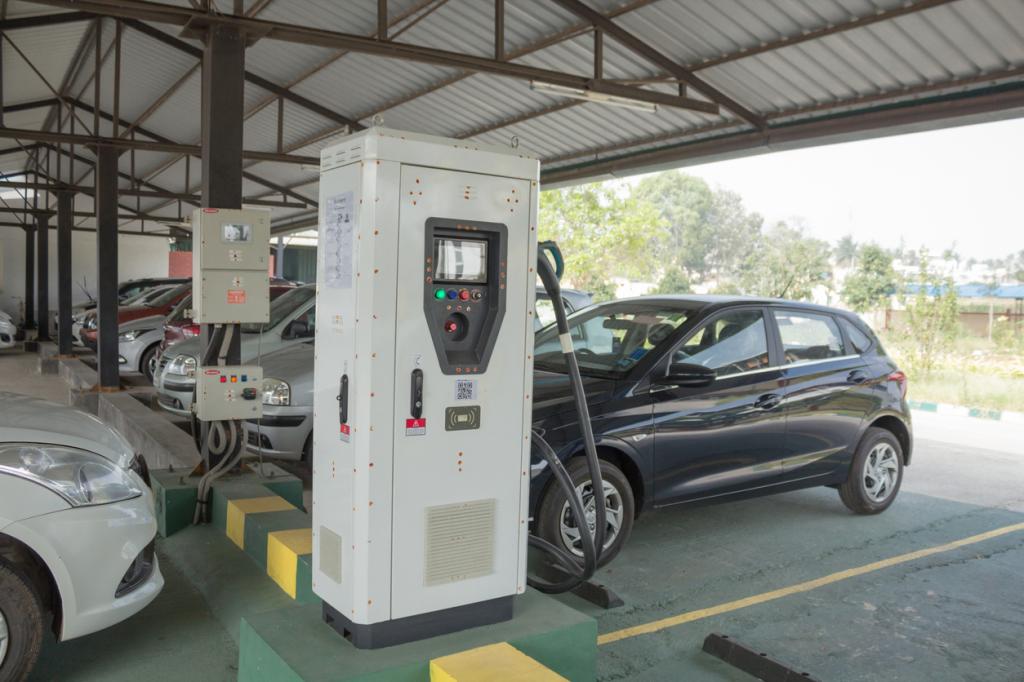 Economic development and the environment are pictured as sworn competitors. It has been hypothesised that developing economies need to exploit their natural resources and make a case for significant economic growth through industrialisation. This propels the economies to move its population from subsistence to substantial living.

As history vouches, production and industry-driven development of Western economies in the previous centuries led to robust economic growth but also to large-scale environmental degradation. The ‘London Smog’ in 19th century England, ‘Rivers on Fire’ in mid-20th century United States, the recent ‘Beijing Smog’ in China and the ongoing air pollution catastrophe in North India are prominent examples of trade-offs in developmental governance regimes.

Today, it is no longer environmental development against economic growth. The citizens of both developed and developing nations demand a cleaner and safer environment, a new regime of governance known as ‘environmental governance’.

What is double dividend?

Environmental economists have hypothesised a possibility of earning a double dividend from the environmental taxation instruments or rather, a bonus for developmental goals from environmental conservation.

The hypothesis was first introduced by David Pearce in 1991. It claimed that environmental taxation, which has been growingly seen as an effective economic instrument to create incentives in favour of cleaner production and consumption, can improve environmental and economic conditions. This can be achieved by imposing an environmental tax and recycling revenues obtained to reduce other pre-existing taxes.

A relevant literature meta-analysis by Freire-Gonzalez (2018) suggests that the double dividend hypothesis is possible to achieve. However, the empirical literature around the theory is sparse.

The recent changes in environmental-developmental perspectives and geopolitical situations provide “favourable” conventions for transitioning away from oil and building capacity and infrastructure for the adoption of new technology ecosystems like green energy and electric vehicles (EV).

Countries like India have the option to realise the potential for a second dividend and transition towards cleaner technology. Here, we are discussing the Double Dividend Hypothesis in view of higher oil taxes and investment in EV vehicle push with its potential direct, indirect, and spillover effects.

Passenger vehicles are becoming the preferred mode of transport due to their accessibility in areas with inefficient public transport, increasing lifestyle standards and now, due to the increased risk of infection transmission.

This is further bolstered by the banking sector’s capacity to provide affordable financing options for automobiles. In 2020, India became the fifth-largest automobile market in the world.

Around 3.5 million units of commercial and passenger vehicles were sold in the country and many companies began exploring India as an export hub for their vehicles. This is despite the fact that these vehicles are gutting a fair share of oil and polluting the air in their life cycle.

India’s oil consumption was reported at 4,669.078 barrels per day in December 2020. More than 90 per cent of this demand was fulfilled through imports. This puts a heavy burden on India’s mobility ambitions.

In June 2020, the tax component on petrol and diesel was 69 per cent and 58 per cent respectively. This means, more than half the prices paid by the consumer is in terms of taxes.

Excise (Union tax) on petrol increased by over 200 per cent to Rs 32.98 per litre in September 2020 from about Rs 10.38 per litre in March 2014. Excise duty from petroleum products alone now contributes 85-90 per cent of all excise duty collected by the Union government, accounting for roughly 24 per cent of indirect tax revenues in 2018-19. 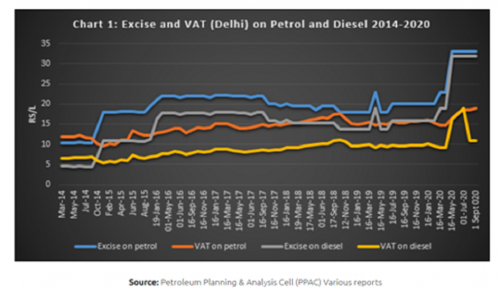 During the 2021 hike in petrol prices, India’s oil minister Hardeep Singh Puri commented that levying such taxes helped the government fund social schemes, such as for providing free COVID-19 vaccines, meals and cooking gas to millions during the pandemic. In a way, these high amounts of taxes are a significant part of the welfare distribution.

High taxes on consumer petroleum products create the perfect condition for battery electric vehicles (BEV) and hybrid vehicles (referred to as EVs henceforth) push in India. Thus, this serves as the  first dividend by cutting carbon emissions from the transportation sector.

The second dividend of this hypothesis is financially strengthening the EV ecosystem by leveraging the income from petroleum taxes for adoption of “green industry”. The EV sector is already getting great incubation support through subsidies.

With these developments, the EV market in India is estimated to touch Rs 30,416 crore in 2025. Between January and July 2021, India received more than Rs 25,000 crore worth investment for the EV sector. In the first quarter of 2021, India’s total foreign direct investment was around Rs 1,71,321 crore. The country is also likely to witness an investment of Rs 95,812 crore in the next five years, according to the report Electric Mobility in Full Gear 2021, India.

Apart from the capital gain, the EV sector will create around 10 million jobs in India by 2030 in domains such as designing, testing, manufacturing, charging infrastructure, sales, battery technology, management, among others.

Energy and mobility transition towards greener technologies can potentially open new avenues. One of them will be the rural agricultural sector, which is experiencing the increasing energy demand for irrigation.

Even though almost 70 per cent of agriculture holdings in India still lack adequate irrigation energy access, around 8-11 per cent of carbon emission is from irrigation pumping energy requirements.

The transition towards electric irrigation systems is inevitable. The capital-rich EV innovation sector is leading efforts towards high-efficiency brushless direct current motors and other components.

The irrigation sector’s push for green energy, including the Pradhan Mantri Kisan Urja Suraksha evem Utthan Mahabhiyan scheme for solarisation, shall provide large-scale transition to the EV manufacturing sector. The dividend earned from the sector will be a huge bonus.

Although the outlook looks promising, it needs to sustain the test of time in a globally competitive market. India’s push for EVs is still nascent and its success is yet to be observed. The current development calls for a more robust analysis of the double dividend hypothesis to make a compelling case study on the concept.