A large amount of energy produced in the state is from water-intensive coal power plants. Moving to renewable sources will solve the problem 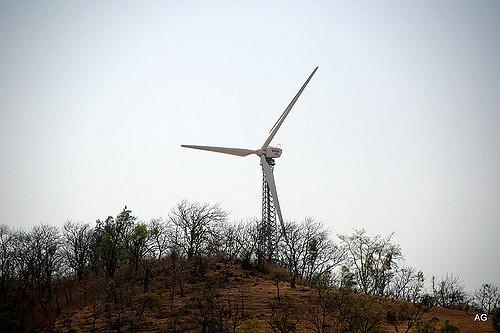 Maharashtra is currently reeling under a severe drought caused by two consecutive weak monsoons in 2014 and 2015. Out of a total of 43,000 villages, more than half (27,723) have been declared drought-hit. The water level in Marathwada dams has fallen to two per cent, with two dams running completely dry.

The energy strategy of the state needs to be formulated keeping in mind the present water supply situation as well as the potential for future water shortages.

The present coal-thermal dominated generation mix is unsustainable, both environmentally and economically. Not only does a coal power plant release greenhouse gases, but the generation of power is also water-intensive. Coal power plants require large quantities of water at various stages of the energy generation cycle, with the average water requirement being 23,000,000 litres per megawatt per year. In comparison, the average water requirement for a solar photovoltaic (PV) power plant is 13,500 litres per megawatt per year.

Most coal-fired power plants in the state are located in the drought-prone regions of Marathwada, Vidarbha and northern Maharashtra. A continued reliance on coal-thermal power would therefore be catastrophic for the region’s water supply, environment and economy.

Natural gas cannot be a long-term option as there is not enough natural gas available in India. About 70 per cent of the gas-based power generation capacity in the country remains stranded or under-utilised due to a shortfall of domestic natural gas. Hydraulic fracturing, or ‘fracking’, has not become commercially viable in the country yet. It is also an extremely water-intensive process.

The government of Maharashtra has set an ambitious target of installing 14.4 GW of renewable energy capacity by 2020. This will include 7.5 GW of solar power, 5 GW of wind power, 1 GW of bagasse-based cogeneration projects, 400 MW of small hydropower, 300 MW of power from biomass and 200 MW of power from industrial waste.

But increasing renewable energy capacity in the state is not the only answer.Transition from fossil fuels to renewable energy is also an important factor in the process.Coal-thermal electricity generation needs to be brought down to minimise the negative effects of coal power and to facilitate the transition to a renewable energy-based energy industry.

The life of a 20-25 years old power plant can be extended by 15-20 years after renovation and modernisation. This means that a plant can operate for a maximum of 40-45 years.

Maharashtra has seven units at four coal-fired power stations that are 35 or more years old and are consequently reaching the end of their operating cycles. The collective capacity of these units is 1.46 GW, amounting to 8.5 per cent of the total coal based electricity generation in the state. All the plants are owned by the state-run Maharashtra State Power Generation Co Ltd (MSPGCL). 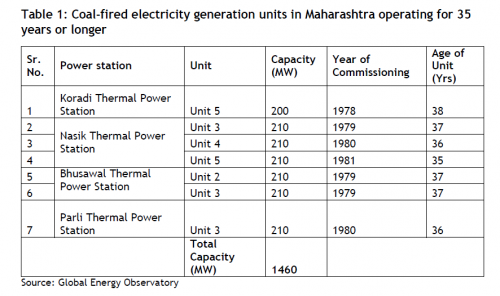 The combined electricity generation by all the units amounts to 8,761 million units (Capacity Utilisation Factor, or CUF of 68.5%). To generate the same amount of electricity, solar plants of a collective capacity of 5 GW will have to be installed (CUF 20%). The state’s solar energy target is 7.5 GW. To meet this target, 1.5 GW of solar capacity will have to be commissioned every year until 2020. By the same calculation, it will take 3.3 years to install 5 GW of solar capacity. If installation begins within six months, 5 GW could be commissioned by the end of 2019. To ensure that the supply of electricity is not hampered during the evening and night, electricity could be procured from power exchanges during these periods.All these power plants are located in Marathwada, Vidarbha and northern Maharashtra, regions where the level of global horizontal solar irradiance (GHI) is high, making them ideal locations for solar PV power plants.

Even with the increase in installed capacity brought about by switching over from 1.46 GW of coal-thermal power to 5 GW of solar power, more than 33 billion litresof water would be saved annually. This does not include any water that is recycled at the solar power plants.

The solar power projects should be constructed at suitable sites as near the thermal power stations as possible, so that redundant workers from the units can find gainful employment close to their former work place, after being given the requisite training. The rehabilitation of unemployed workers from the coal energy sector can thus be smoothly effected. According to Bridge to India, a solar energy technology firm, utility-scale solar power plants create 9 operation and maintenance (O&M) jobs per MW. Setting up 5 GW of solar panels would therefore create 45,000 jobs. The solar energy sector could consequently be a major source of employment for the region.

As per the new pollution control norms by the Ministry of Environment, Forest and Climate Change, the coal thermal power plants will have to reduce particulate matter emissions by up to 40 per cent and limit their water consumption by up to 2,500 litres per MWh by December 2017.

Currently Maharashtra has only 379 MW of installed solar. In order to achieve the goal of 5 GW of solar power by 2019, installation will have to increase at a considerably faster rate.

An integrated electrical energy policy for Maharashtra needs to be formulated, that deals with both conventional and renewable power generation as well as energy efficiency.

In January 2016 the solar tariff in Rajasthan, which has the highest installed solar capacity in India at 1.264 GW, fell to a new low of Rs 4.34 per unit. The current cost of power from MSEPGCL-run thermal power plants is around Rs 4.25 per unit. The average wind power tariff in Maharashtra is Rs4.4 per unit. Renewable power is already almost at par with coal-thermal power.

Integrated energy planning will enable Maharashtra, the largest power consuming and generating state in India, to move to a sustainableenergy future.  The adoption of this strategy could set an example for the rest of India and be the first step towards ensuring that the entire country can achieve energy security.