Arguing against Sardar Sarovar dam, water expert Himanshu Thakkar wrote, Rich people in Delhis posh Greater Kailash area may have 20 air conditioners and the capacity to pay for the electricity required, but is that sufficient reason for building large dams. Opposition to development projects has always invoked the myth that electricity is mostly used by the rich for their material comforts.

The fact is domestic use, rural as well as urban, accounts for only 21 per cent of total electricity use in India, a major portion of this is used for lighting. Seventy four per cent of the electricity is used by farmers, industry, infrastructure, commercial and public services. From an incubator in the neonatal ward, to an incinerator in the crematorium, electricity is required at all stages of life, and also afterwards. Yet, there are many misconceptions about electricity.

At present, 98.7 per cent of the total electricity in India comes from steam turbines using coal, oil, or nuclear reaction as primary fuel, or from hydro projects. Only 1.3 per cent comes from solar, wind or biomass. The potential of tidal power is in any case very small, and whatever little is there is being opposedby those who spoke in favour of tidal power when their primary target was Sardar Sarovar dam. Energy from steam turbines using sunlight as the source of heat; from the waves, and geo-thermal, is still in an experimental stage.

Solar energy conversion to electricity by photo voltaic (PV) cells is prohibitively expensive as of now. From the information available, a drastic reduction in the cost of solar PV cells is unlikely in future. PV cells produce low voltage DC electricity and it is impractical to convert it to grid quality electricity. Even for running isolated small loads, like a street light or TV in the village chaupal , the output of PV cells has to be stored in batteries and these batteries inflict pollution load on the environment. Last but not least, solar units can generate electricity only during the day, and that too if the sky is clear.

Modern wind turbines can generate grid quality electricity. The plant load factor (plf) or the actual energy that is likely to be generated from practical considerations is expressed as a per cent of theoretical maximum based on installed capacity. plf of thermal, nuclear and hydel units can be 80 per cent. But wind is an intermittent phenomenon and its plf is much lower, depending on wind characteristics of a region. Besides, generation from wind turbines is unreliable, as the wind can drop suddenly. Therefore, as the share of wind energy increases, the share of hydropower also has to increase, to absorb sudden loss of wind generation.

One cannot press a button to drive away clouds, make the sun shine more brightly or make the wind blow faster, when required. Only the hydel turbines (and the gas turbines, but these are few) can respond fast enough to supply electricity on demand, and are deployed to supply the peak load over and above the base load. Therefore, a grid must have adequate installed capacity in hydel projects to supply this peak load. For the load pattern in India, the recommended share of hydel capacity is 40 per cent; it is 22 per cent currently. Hence there is load shedding during peak hours. 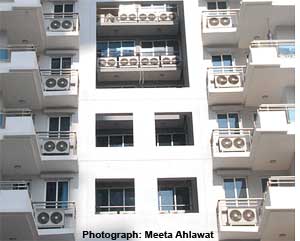 Transmission and distribution losses in India are around 40 per cent, compared to 8 per cent in developed countries. But much of these losses are actually electricity theftelectricity used but not paid for. Surely the loss of revenue should be prevented, but that doesnt make a big reduction in the consumption. As regards savings, per capita consumption in India is already one of the lowest in the world, even among the well-to-do and scope for further saving is very little.

India needs to more than quadruple its electricity generation in the next 20 years or so. It requires excessive ignorance and infinite romanticism, to believe that we can do without large projects based on coal, oil, nuclear, and hydro.

The author is chief engineer, National Water Academy. The views expressed in this article are his own