Renewable energy: Curtailment is a bane

If solutions to the problem are not found, it will add to the operational risk of renewable energy projects, discouraging investments

‘Curtailment’ of power generated by wind and solar projects is a persistent problem for renewable energy (RE) developers in India despite a ‘must-run’ assurance in regulation.

‘Curtailment’ refers to an action under which off-take (flow) of the generated power is restricted or denied, resulting in the decrease of a plant's output. ‘Must-run’ means that utilities, state load dispatch centres (SLDCs) and distribution companies (discoms) have to prioritise the evacuation of the generated power from renewable energy.

Data showing curtailment is not available in the public domain due to a lack of transparency on the part of SLDCs and discoms.

Industry observers estimated curtailment at 1-5 per cent for solar power. But developers claim it to be much worse.

For instance, data shared by National Solar Energy Federation of India (NSEFI) for Wardha Solar’s Nalwar Project in Karnataka for June 2019 points to an average curtailment of nine hours daily.

Evidence from other projects, such as three solar projects in Tamil Nadu — Phoebus, Aadhavan and Adityashakti — owned and operated by the Greenko Group for 2017, shows curtailment to be up to 100 per cent on several days during the peak summer months of June and July.

This leads to substantial losses as developers do not fully account for them, while bidding for projects. In the absence of a restitution mechanism for such losses, the viability of projects becomes challenging, especially as RE companies operate with thin margins and small capital.

Violation of ‘must-run’ RE status

The Indian Electricity Grid Code 2010 asks SLDCs to prioritise scheduling of renewable power over other generators / sources to incentivise green energy projects, unless there are technical constraints (eg, congestion or unavailability).

SLDCs were allowed to back down / cut down RE power only after exhausting all options, including running thermal power plants at a technical minimum plant load factor of 55 per cent, and it should be done equitably.

Inadequate grid availability has been a concern in RE-rich states. In Tamil Nadu, which houses India’s largest wind capacity of 9.2 gigawatt, wind power generation increases significantly during the monsoon when demand for power dips.

The intra-state grid is unable to accommodate the excess generation due to low demand and can't transmit it out due to limited inter-connections with the national grid, leading to heavy curtailment.

Curtailment for wind power plants averaged around 30-35 per cent of generation in peak season during 2012-15; it averages at 20-25 per cent currently, said an official requesting anonymity of Tamil Nadu Spinning Mills Association, which operates several wind farms in the state.

Aggregate wind generation data for Tamil Nadu for the peak wind generation period of April-September shows a continuous decline in capacity utilisation factor (CUF) over the past four years.

This implies that while installed generation capacity has increased, actual generation has decreased — pointing to generation curtailment. 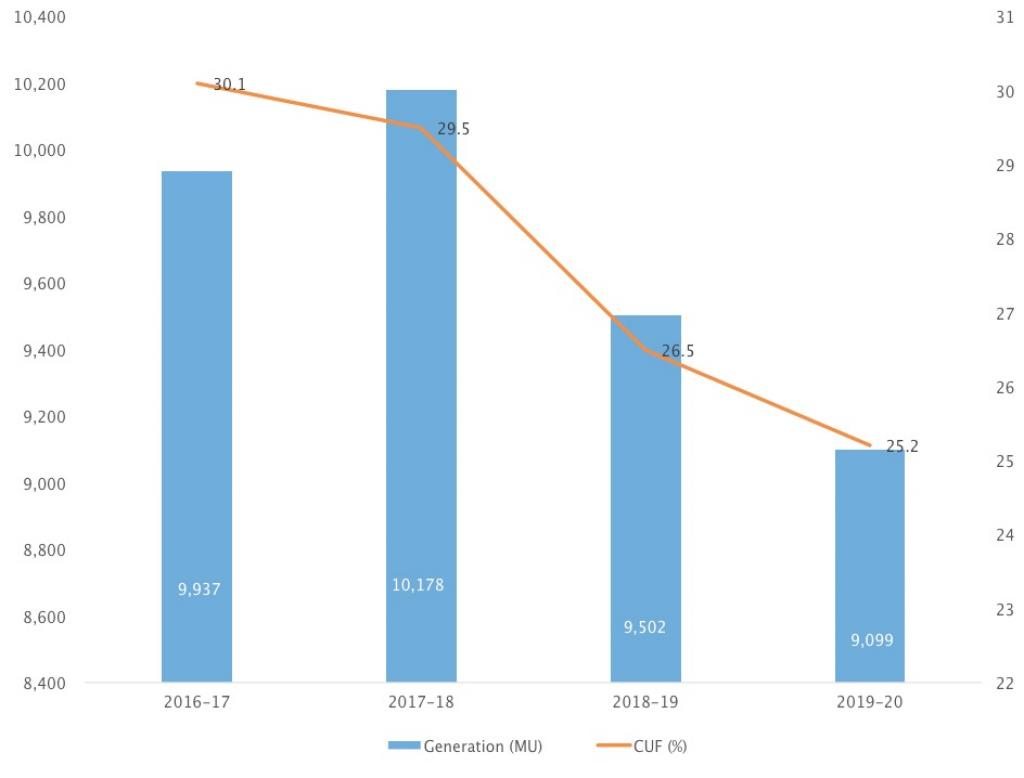 SLDCs often do this in the garb of grid security, pushed by commercial interests of discoms. There is a reluctance to back down thermal plants to accommodate RE generation due to the two-part tariff mechanism, under which thermal plants have to be paid fixed charges on the basis of availability despite no scheduling.

RE power is also asked to back down in favour of cheaper sources, such as power exchanges.

Quantifying reasons for curtailment has been difficult due to the inadequacy of data and lack of transparency. However, there is some evidence emerging of ‘illegal’ curtailment put forth by RE industry associations:

Violating the ‘must-run’ status of RE plants, SLDCs have been curtailing RE generation despite adequate grid availability. NSEFI in a letter sent to the Karnataka Power Transmission Corporation on June 17, 2019, presented information on curtailment from solar plants operated by Wardha Solar, Parampujya Solar Energy and Adani Green Energy that showed grid availability to be adequate during most curtailment instances.

Developers allege that while curtailment is rampant and affects all projects, older wind and solar projects with higher tariffs are curtailed more than the new ones supplying power at lower tariffs. As evidence, NSEFI provided curtailment data from March to August 2017 for five projects in Tamil Nadu, including three supplying power at Rs 7.01 per kilowatt-hour (kWh) and two at Rs 5.10 per unit.

While curtailment from cheaper projects remained near zero, the other three faced curtailment of over 50 per cent on a number of days. 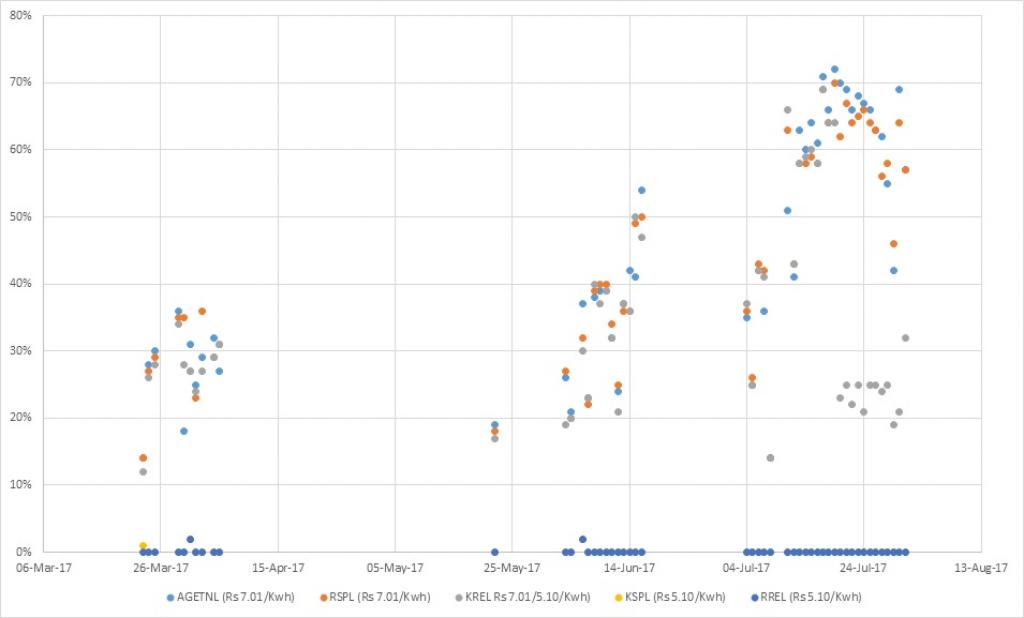 3. Curtailment due to PPA dispute

The RE sector in Andhra Pradesh has been in flux since the state government announced its decision to renegotiate ‘expensive’ wind and solar power purchase agreements (PPA). Following this, the SLDC has been indiscriminately curtailing power generation.

“Solar power projects in Andhra Pradesh are suffering unprecedented, continuous curtailment to the order of 60-70 per cent since July 2019, as backing down instructions are being issued by Andhra Pradesh SLDC,” NSEFI wrote to the Union Ministry of Power in October 2019, requesting its immediate intervention.

This continued despite intervention from the high court at Amaravati, which in an April 2019 order asked the SLDC and APTRANSCO — the state's main power generator — to stop curtailment from solar and wind energy projects.

RE curtailment is persistent and efforts to reduce it seem to slow.

The government has focussed on several measures to increase grid flexibility to prepare for increased RE penetration, such as increasing flexibility of coal-based power plants, enlarging geographic and electrical balancing areas, expanding transmission in strategic locations, and installing grid-scale storage systems.

The government also planned to update grid management techniques, with the introduction of forecasting and scheduling mechanisms and deviation settlement mechanism (DSM) across states.

Attention has also been given to developing real-time market (RTM) for electricity to improve grid reliability and optimise operations, particularly as the share of variable RE in the generation mix increases. Ancillary services have already been introduced and are planned to be scaled up.

Implementation of such technical and policy measures, however, remain mostly at a draft / discussion stage, especially at the state level.

Meanwhile, there has been limited acknowledgement from central and state governments about the commercial motives behind curtailment. Developers have increasingly voiced their concerns through associations and approached regulators and courts, which has yielded some results.

The Tamil Nadu Electricity Regulatory Commission, for the first time, pulled up the SLDC for curtailment in an April 2019 order issued in response to a 2017 petition of the NSEFI. The SLDC was asked to submit a quarterly report of curtailed RE generation with clearly documented reasons for each back down order, and told that “any whimsical backing down instruction would attract penal action under Section 142 of the Electricity Act, 2003 on concerned officials.”

The Union Ministry of Renewable Energy has time and again asked states to refrain from curtailment. It has decided to increase the compensation for curtailment to up to 100 per cent of the average generation per hour during the month, under the latest amendment introduced to the solar competitive bidding guidelines.

While these changes are welcome, finding fundamental solutions to curtailment has become crucial. Wind and solar power development is and will continue to be limited to a handful of southern and western states.

This increases the probability of generation curtailment and adds to the operation risk of projects, discouraging investments.

The challenge is directly related to the financial weakness of the discoms, which requires strong structural reforms. Moves towards RTM development need to be accelerated, as it will discourage long-term two-part PPAs with power plants and result in efficient pricing, lowering the incentive to curtail RE.