Solar trees are beneficial in a land-scarce economy 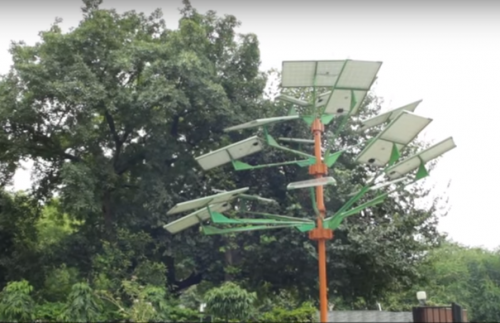 The working of a solar tree is much like that of a real one—leaf-like solar panels connected through metal branches using sunlight to make energy.

Availability of land of installing solar panels on a large scale is often a hurdle in the progress of renewable energy. A solution to this is planting solar trees, which are more ergonomic, using little space. Solar trees are complementary to rooftop solar systems, or other green building measures, symbolizing these larger investments and their environmental benefit.

The Solar tree panels charge batteries during the day. At dusk, the tree automatically switches on LED lights. It is programmed to regulate the amount of light it produces. Solar trees are flexible and rotate to face the sun and produce maximum possible amount of energy using a technique called “spiralling phyllataxy”. Its calculated rotations allow even the lowermost solar panels to receive ample sunlight for electricity production. It can also be used in street lighting and industrial power supply systems.

Solar tree is made of metal structure and have solar panels at the top instead of branches of real tree. Main body of solar tree is a simple hollow tube closed at one end to enable the attachment of the upper, smaller rod which should carry the upper panel. This panel is placed high above the other panels at a vertical angle. The angle provides a constant area for the sunlight regardless of the sun trajectory during the day. The height at where it is placed enables a greater panel area which will not cover the lower placed panels.

The innovation is suitable for use in off-the-grid remote areas or in places that need point-sourced light like car parks and street lighting. Besides, with gird connectivity or battery store, the solar tree can also supply electricity wherever needed.

The plant’s design can vary according to different factors. In India, for instance, solar trees can contribute to fulfilling energy demand while saving space. The technology can ensure continuous supply of electricity in areas that do not have enough power supply and can benefit many who are not connected to the grid. Solar energy is renewable and clean in nature and presents a better alternative over other methods of electricity production.

Central Mechanical Engineering Research Institute (CMERI), in West Bengal’s Durgapur, has designed and developed, a solar tree that takes up only four square feet of space and produces about three kilowatts of power, enough to power about five households. Conventional solar photovoltaic systems occupy 400 square feet of space to produce the same amount of electricity.

Their working model could be fit onto rooftops and on highways due to its minimal space requirement. Apart from Durgapur, solar trees are also installed in Council of Scientific and Industrial Research, New Delhi and the residential campus of Minister of Science & Technology of India. The solar tree installation was also used by the Durgapur Municipal Corporation at its Srijani Auditorium. The tree has been designed and developed by Indian researchers. They claim that there is no barrier in using solar trees in urban or rural areas.

The vertical solar plant makes it possible to harness 10 per cent more sunlight. They can be rotated twice a day to be aligned to the movement of the sun. CMERI has licensed the solar tree with M/s Vibes Solar Solution India, Kolkata and the process is underway to license the technology to five more companies. Researchers at CMERI are working on bringing aesthetic models to suit the need of public parks, gardens and market places.