Will the recent SECI bid help unlock the complete potential of renewable energy?

The Government of India-owned Solar Energy Corporation of India (SECI) Ltd issued a tender in August 2019. It sought to set up 1,200 MW of renewable projects connected with the Interstate Transmission System (ISTS), with a guaranteed peak power supply.

The successful bidding for the tender in late January 2020 is seen as a building block of a new revolution in the Indian power sector.

The SECI tender was the first of its kind. The projects implemented under the SECI tender are required to provide assured firm energy throughout the day and to meet peak requirements. These are expected to have at least two components — an energy storage system (ESS) component and renewable energy (RE) generating component (either of solar / wind / solar-wind hybrid).

Both solar and wind are intermittent source of energy and their increased proportion risks the grid stability. The power produced from RE hardly matches the demand. Therefore, the storage mechanism enables the use of energy produced during the day or windy times at the time of demand besides ensuring steady power output and aids grid integration. 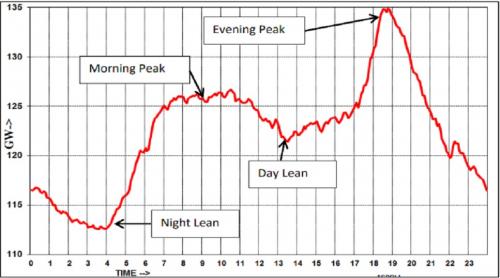 These projects under the tender are eligible for two-part tariffs:

Peak tariff - For six hours daily, on the day ahead and on-demand basis between 5.30-9.30 AM and 5.30 PM-12.30 midnight, discovered through e-reverse auction. The peak power demand is required to be met by any storage technology.

Off-peak tariff - For 18 hours daily, supposed to be met by the installed RE and the tariff fixed at Rs 2.88 (updated from previously fixed at Rs 2.70).

The auction of the tender in late January, was the world’s largest renewable-cum-storage (RE+storage) one . The project will deliver reliable and steady renewable energy throughout the day. It will lead to better integration of RE in the grid.

The discovered ‘effective weighted average tariff’ in the SECI auction in two bids is Rs 4.04 and Rs 4.30 and is signed for 25 years. Experts believe that these are significantly less than the levelised tariffs realised in the recent thermal power tenders in the country, that are in the range of Rs 5-7 / kWh and are on an increasing trend. This has enthused the power sector.

“This is a major milestone and demonstrates the emergence of RE+storage as a strong option for peak power in India,” Rahul Walawalkar, president, India Energy Storage Alliance, said

“With the growing penetration of renewable energy, we are witnessing more ramping and part-load operations of thermal plants. The emergence of such hybrid RE+storage solutions can also help the existing coal plants to operate more efficiently as baseload plants and avoid higher emissions coming from the part load and ramping operations,” he added.

On the other hand though, some industry specialists believe that the obtained tariffs are a bit aggressive and it may probably set yet another impossible benchmark for the industry that will affect the growth of such projects, as was the case of lowest solar bid obtained at Bhadla. The lowest solar tariff of Rs 2.44 was discovered in May 2017 which could not be matched subsequently.

It resulted in the government imposition of tariff-ceilings for future projects to obtain minimum tariffs without taking into account the ground realities. That was one of the factors that ensued slowdown in the solar sector.

Rahul Tongia, a fellow at Brookings India, is skeptical about the discovered prices. He says it is highly unlikely to deliver power through battery at Rs 6.85 / kWh, which translates to ~$85 / MWh (megawatt hour) all-inclusive installed (assuming incoming solar at listed prices).

This, even as in the US, a market with more advanced storage technologies, similar bids have seen price discoveries close to $150 / MWh. Interest rates are also much higher in India. This bid, while useful for learning, shouldn’t be viewed as true price discovery as there are a number of tweaks if not potential distortions in this.

In February 2020, another reverse auction for 1,200 MW of solar capacity, conducted by SECI, discovered the tariff of Rs 2.50 per unit. Comparing the two projects, each unit of RE will be sold at 38 paise higher in the case of RE+storage project. ReNew Power, a party in both the projects, has been awarded 200 MW of solar capacity at Rs 2.51 per unit and the 300 MW of off-peak capacity in the RE+storage project at Rs 2.88.

Tongia says even a small differential for the “solar” component (maybe 38 paise over-price on off-peak) means a 80-90 paise potential for the peak (via gearing / leverage on a ratio basis). While on the flip side, a big chunk of the generation will not be dispatched through storage.

The developers just need to put in enough to have 85 per cent availability of total peak period offtake. So, the RE+storage project ends up cross-subsidising the storage systems.

Instead of putting up extra storage capacity to fulfil the entire demand that would not be fully utilised for most of the days, it will be cheaper to pay penalties for a few days. This is similar to the case where a small extent of curtailment is cheaper than absorbing 100 per cent of generated RE.

Walawalkar adds that there may be some hours or days when the storage utilisation will be lower, but on the other hand, there may also be the risk of lower RE output on some days and thus, storage may get deeper cycles. A good project developer would choose appropriate technology and do the sizing, balance,  risk and reward.

Since it is in an open bid, it is fair that all can compete and then, better solutions can be deployed. It might not be a perfect solution but let the experiment go on and let us learn from the experience.

Some experts believe that deployment of storage on a project basis, does not utilise its potential optimally. Instead, at the grid-level, the same storage system can be exploited for multiple applications like frequency regulation, black start, voltage support, transmission and distribution upgrade deferral, energy time-shift, transmission congestion relief, ancillary services and many more.

“Some discoms are picking up the tab for storage and seeing a value in it. Else, there is no business case for merchant storage. It should be a grid asset and socialised,” a senior official at Power Sector Corporation, said.

Tongia says that it will turn out to be a good learning experience, but it might be difficult to scale up in the current form. The project will go online in three years, as it will take 30 months for built-up and another six months for administrative clearances and signing of the power purchase agreement.

He further added that it would be interesting to see how pumped-hydro will work. “Karnataka’s internal documents for one case came to over Rs 6 per unit for retrofitting pumped hydro on existing facilities. Greenfield would likely cost more,” he said.

The project is an experiment-in-the-making where the burden of providing firm power has been shifted from utility to RE developers. This is certainly an innovative packaging but it is too early to comment on its success because PPAs with discoms are yet to be concluded. But the project will open a Pandora's box of new learnings that will help in India’s energy transition.