Fire in the mountains 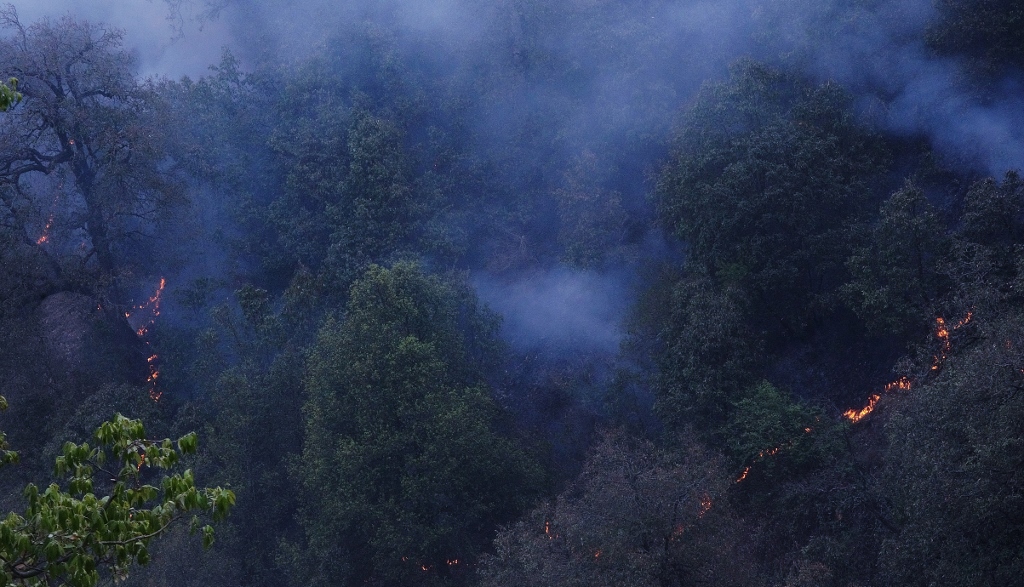 An oak forest being ravaged by the Uttarakhand forest fire (Photo: Rajkamal Goswami)

We have been surveying bird communities in the forests in and around Mukteshwar in Kumaon region of Uttarakhand since late March, travelling intensively within an area of 600 sq km. We had already witnessed numerous small forest fires during this period which is considered the “fire season”. Most of the fires occur in the pine forests, which at times spread to adjoining oak forests. But they are controlled quickly and never allowed to last beyond a few hours. But on April 28 the isolated fires rapidly turned into a massive conflagration.

That day, we saw white smoke rising from the forests just below Mukteshwar ridge. It had started late in the evening on April 27, which, by the next afternoon, reached Simayal Van Panchayat forests, about 500 m as the crow flies. This was in spite of the valiant fire-fighting efforts of the local residents of Simayal, who using lights from their mobiles and torches, fought all night to prevent its advance to their forest. But their sticks, crow-bars and broomsticks could hardly contain the fire advancing through the large chir pine (Pinusroxburghi) tracts. There was no water to douse the flames as the spring had been preceded by an eight-month-long dry period.

Next day, we travelled to Sunkiya, about 11 km from the southern side of Mukteshwar ridge. At 5 am, with the faint light of dawn on the horizon, we came across a yellow-throated marten. It looked agitated as it climbed the cliff adjoining the road. As we turned the corner, we saw fire rapidly gnawing away at the pine and oak woods close to Galgatta village. The north-easterly wind blew the flames from the downhill side, while pine cones rolled down the hills like large fire-balls. A constant shower of stones, splinters, ash and fire debris rendered the road impenetrable for several minutes.

Tragedy for old oak forests and their resident wildlife

As a gust of wind pushed the fire towards the south and we prepared to move on, we looked back at the point where the yellow-throated marten had crossed the road. It had now climbed further up and was perched on a higher pine branch. Such a static pose is unusual for the usually agile and restless marten. That disturbing sight made us realise how devastating the fire was going to be for the natural and abundant fauna of the area.

Within a few hundred metres, we saw the tall, old oak forest of Simayal Van Panchayat now burning intensely. Pine forests burn regularly, but seeing a banj oak (Quercusleucotrichophora) forest in flames is very tragic, particularly because we had recorded over 70 species of birds in this habitat over the past few years, apart from rare reptiles and mammals. 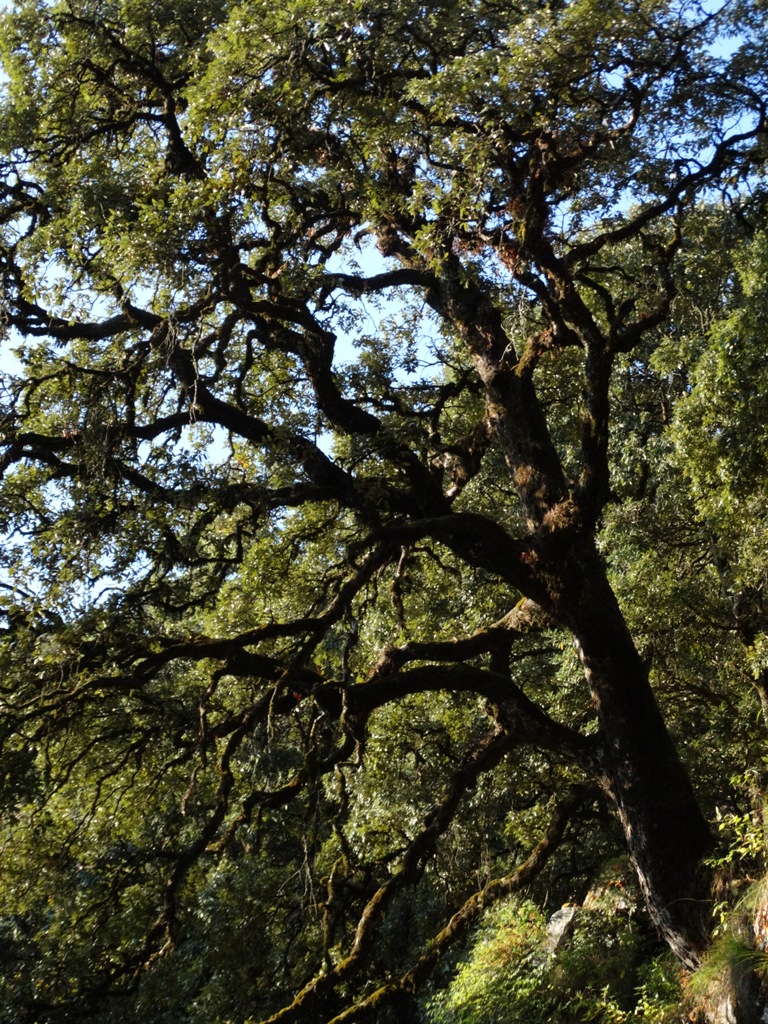 Large oak forest patches, now increasingly rare in the region, are important for the survival and breeding of a number of bird species. Even fairly adaptable birds which can survive in the agricultural matrix—such as russet sparrows, the green-backed and black-loredtits, the Oriental white-eyes, the ubiquitous Himalayan bulbuls, streaked laughingthrushes and grey-hooded warblers—do use oak trees to forage and nest. Apart from these bird species, the dense-canopied oak forests are indispensable to the forest-specialised white-browed shrike-babbler, maroon oriole, rufous-bellied niltava, rufous-bellied woodpecker, chestnut-crowned laughing thrushes and the greater yellow-naped woodpecker. Unpredictable disasters, such as wild-fire, can lead to the local extinction of species. To amplify the point, a living oak tree not only provides abundant nesting niches due to its complex branching structure and cavities but also provides lichens and mosses used as nesting materials by many insectivores such as flycatchers, babblers and warblers. The leaf litter that oak trees shed throughout the year create rich organic humus layers which also support forest-floor specialists such as thrushes and babblers. We have recorded ten species of woodpeckers in this belt, most of which show strong association with the oak for foraging and nesting.

But the fire burned the tree with all their nests and perhaps, within them, countless eggs and young hatchlings. The forest fire was likely to result in high direct mortality and loss of habitat. Other animal groups such as reptiles and mammals are even more vulnerable to fire due to their inability to flee the flames as quickly as birds. Sambar deer, barking deer and wild boar are frequently seen here, but we have also seen endangered species such as the Himalayan palm civet and the king cobra.

Later during the day, as we travelled towards Ramgarh village, another large oak forest of over eight to nine sq km stood ravaged by a fire. This fire also claimed the life of a 52-year-old resident of Ramgarh, who slipped and fell off a sharp cliff as he fought against the fire. Very large oak trees, probably over 150 years old, judging by their girth size, now stood black instead of the majestic silvery green. Later, we found that the same fire had also ravaged a substantial part of the Maheshkhan Reserve Forest, one of the largest oak forest valleys in the landscape which harbours species not easily found in the heavily managed zones.“Sab bhasm ho gaya (Everything is finished),” exclaimed Pratap Singh, the caretaker of the Maheshkhan forest rest house, over phone the previous evening. His succinct description wasn’t far from the truth. An eerie silence prevailed over a black, charred landscape, which, just a few days back used to be a fine dark, green, oak-dominated forest, reverberating with the calls of birds.

Almost all elderly persons whom we spoke to said they could not recall a fire of such scale in terms of extent and intensity. However, there are chances of a good recovery despite the high degree of destruction. Rajesh Thadani, a plant ecologist with Centre for Ecology Development and Research (CEDAR) who has been studying the oak forests of Kumaon for over 20 years, said, “We tend to forget that approximately every 10 years or so, there is a major conflagration in the hills. The last time it happened was in 2002 which was also a drought year. Forests can recover quickly, if care is taken not to remove stumps and the burnt patches are protected. Leaves and branches sprout back quickly.”

Yet recovery may have been easier in the past when the extent of pine was not so widespread, when hydrological health was better and global warming impacts not so visible. Population density is now higher and construction activities far more widespread than 14 years ago. Along with such factors, repeated drought conditions can amplify the ecological impacts of fire even when its frequency remains the same as earlier.

Be that as it may, the current fire, particularly in the oak forests, will have a devastating impact on the local economy of the 50 odd villages around Mukteshwar which depend on banj oak. The dry leaf litter of oak is precious compost for the extensive terraced farmlands and fruit orchards found in this belt. The branches and the bark serve as fuel wood, considered best among all available species of trees. And the fresh leaves are fodder for their milk-yielding cattle. Dairy products form an important source of animal protein for the locals and tourists, most of whom are largely vegetarians. Moreover, milk from the cattle is also sold to the local dairy cooperative for cash income. 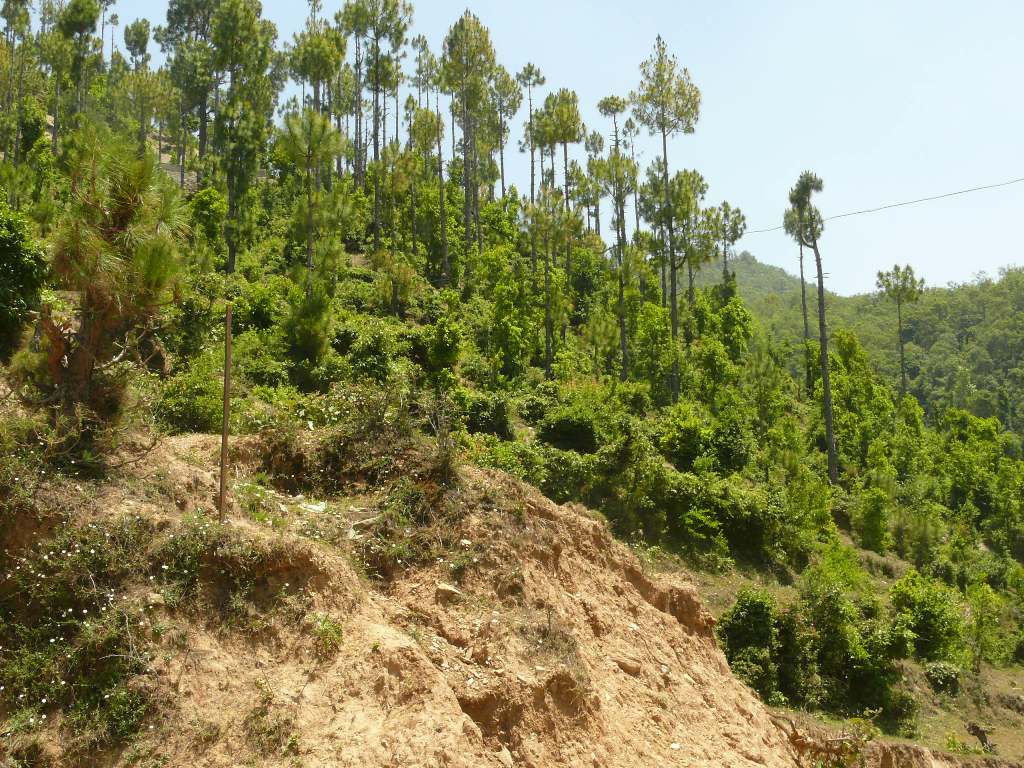 It is impossible for anyone to pin point the exact origins of the fire. Almost everyone, including scientists, forest managers and local people, agree that all fires in this ecosystem are human-caused, whether accidental or purposeful. Leading causes listed by the villagers of Simayal, Dadim, Badeth, Galgatta, Sitla, Satkhol and Satola indicated to us that the careless smoker or a tourist were the most likely culprits. They also pointed to the possible involvement of turpentine tappers, who set fire to old pine trees for increasing resin flow. Government officials, along with a few activists, state that this massive fire was orchestrated by the ”timber mafia” who often use fire as an obscuring device to carry out their nefarious activities. The theory of the timber mafia, though, begs the question as to how burnt timber can be of use to anyone, particularly for commercial sales. Another likely trigger might have been fires set by local people for improving grass yields in the monsoon. The fires may have got out of hand due to the extreme aridity prevalent in the hills. “The heavy fuel load due to lack of regular collection of pine needles over the years, leads to major fires every few years,” said Promode Kant, a former Indian Forest Service officer.

It is also important to separate the immediate triggers of the fire from the complex factors behind its scale. The subtle, long-term and often irreversible land use changes, such as the transition of oak to pine forests, are thought to be important to the scale of the fire. Pine forests are much more vulnerable to fires due to high flammability. The large pine cones of chir, which roll down the hills, act as a highly potent fire-spreading agent. That is why the ploy of the villagers to arrest the fire by creating fire-breaks was not effective. Wind gusts blowing at a speed of two to 15 km/hr also assisted the spread and sustenance of the fire over large areas.

Lack of availability of water to put out the flames, and drying up of perennial streams, has now turned more acute due to two reasons: firstly, water is being diverted to irrigate crops such as apricot, potato, and peas, which otherwise will die due to the lack of rainfall. Secondly, hotels and tourism complexes are exerting a lot of pressure on the water resources. In a region earlier abundant with streams, ponds and rivulets, there is now little evidence of healthy surface water flows. Diversion of spring water for human uses has implications for oak forests as well—the reduction in soil moisture and humidity in forest soils can render them even more vulnerable to future fires and pine invasion. Thus, there must be acknowledgement and understanding of the numerous complex mechanisms at play.

It is evident that enough work had not been done to maintain fire lines and trenches, a task usually undertaken jointly by the government and people. Van Panchayats, earlier active in forest management; have gradually lost their authority and the participation of communities. They need to be incentivised to exert vigilance against any outbreak of fire within their forests. With improving telecom services in the hills, it should not be difficult to establish rapid communication systems to announce fire outbreaks. To arrest future fires rapidly and effectively, the Van Panchayats should be equipped with both mechanical as well as chemical-based fire-extinguishing tools. Long-term interventions should include regulatory policies for existing and upcoming construction in the hills and a ban on water-intensive activities such as large-scale construction, turf grass lawns and inappropriate cropping patterns.

The recovery of the forests and the people dependent on them will ultimately depend on post-fire protection and stronger prevention measures in the future.

Rajkamal Goswami and Ghazala Shahabuddin work on forestry and biodiversity issues in Kumaon Himalayas with Centre for Ecology, Development and Research, Dehradun (CEDAR).