The Chhattisgarh Rajya Van Vikas Nigam was carrying out “thinning” inside the forests adjacent to the village, Sanauli, when a resistance led by women started 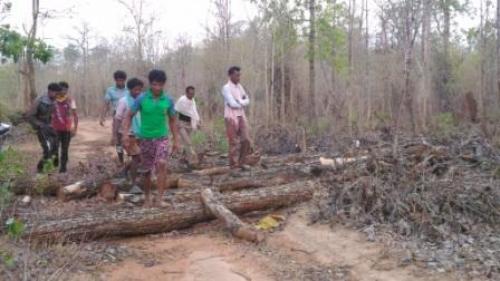 A small Gond village in Rajnandgoan district of Chhattisgarh has been giving the state’s forest development corporation, also known as the Chhattisgarh Rajya Van Vikas Nigam, sleepless nights since the end of December, 2015.

The nigam was carrying out its practice of “thinning” inside the forests adjacent to the village, Sanauli, when a massive resistance led by the women of the village against the nigam’s operations started.

The village confiscated the felling tools of labour hired for the job and demanded the complete exit of the corporation from the forest.

Officials in the Rajya Van Vikas Nigam were bewildered. Later, they learned that the gram sabha of Sanauli had received Community Forest Resource (CFR) titles under the Forest Rights Act (FRA), 2006 over the forest land that was being felled as part of the nigam’s “thinning” exercise. The gram sabha was exercising its right to protect and manage its forest land.

The Chattisgarh Rajya Van Vikas Nigam (CGRVVN), like most other forest development corporations in India, was created to launch an aggressive man-made forestry programme.

Accordingly, large tracts of diverse natural forests deemed “low value” in terms of revenue to the state exchequer were cut down and replaced with plantations of teak and bamboo.

After the plantations have been carried out, “thinning” is done every five years by the CGRVVN in the teak plantations.

Nearly 10 years ago, the nigam had planted teak and bamboo in some patches of Sanauli’s CFR. Unaware of the CFR rights of Sanauli in these forest patches, the nigam started its thinning operations in December 2015.

This often meant cutting down several, huge and old growth trees that lie between teak plantations. These trees, almost always, belong to species that the Gond community uses and values.

A huge protest ensued. Sanauli asserted protection rights over its CFR. The CGRVVN claimed the gram sabha had no right to obstruct pre-approved administrative work inside forests; its rights were limited to nistar, grazing, and collection of minor forest produce from their CFR area.

The gram sabha maintained its stand. The Rajnandgoan division of the nigam also challenged Sanauli’s protest on grounds that the forest land where thinning had been done did not actually fall inside Sanauli’s CFR.

A joint inspection of revenue and forest officials revealed that the CGRVVN was wrong in its assessment. The CGRVVN had to stop its operations in the CFR area.

Around 100 trees had been cut down before the CGRVVN was forced to withdraw. Sanauli refused to let a single log of wood from being moved out of their CFR area. The wood logs have been lying in the forest since January 2016, despite the nigam issuing a tender for it.

“How is it the fault of the other trees that teak has been planted next to it? Why should it have to be cut down?” said Santosh, the secretary of the committee constituted for management of CFR under Section 5 of the Forest Rights Act. “The smaller plants also get hurt when big trees are brought down. Only a handful of fruit-bearing trees are spared. Everything else, big or small, is removed.”

“We have very little forests left. If we allow these to be cut down, what will remain for our next generation? Earlier, we had no right to protest against such destruction of our natural forests. Now we do and we will raise our voice,” said another member.

“Timber plantations of the van nigam are of no use to us. Worse still, they come at the cost of our natural forests, which we depend on for our everyday use. We will wait until a final decision is taken on the fate of nigam’s presence in our forests. If we are taken to jail for our protest, so be it. After all, it is for the cause of saving our forests,” said the gram sabha members in a unified voice.

Clearly, Sanauli views van nigam’s activities destructive for forest. The gram sabha is making plans for management of its CFR. Already, every household takes a turns in patrolling the forests of its gram sabha. The village is determined that the nigam should have consulted or informed them before starting any activity in their forest.

The van nigam, on the other hand, is implementing its working plan, which is approved by the regional office of the Ministry of Environment, Forest and Climate Change.

“The forest land, which Sanauli claims to be its CFR area, was leased out to us much before the village received patta over it. We are only carrying out our administrative duties as per the working plan. We had, anyway, no clue that community forest rights had been recognised over those forest patches. Even if that was the case, we were not stopping them from exercising their rights of minor forest produce collection or grazing or fuel wood collection. There was no reason for conflict. In fact, the village could have benefitted from wage labour opportunities arising out of our activities. Some NGOs have contrived against us and instigated the village,” said the officials of Rajnandgaon division of the CGRVVN.

While CGRVVN officials claim that a solution will be arrived at amicably, it is learned that the divisional manager of Rajnangdgaon has written a letter to the district collector, demanding revocation of CFR rights of Sanauli to put the conflict to rest, once and for all.

Such an act will, in all likelihood, accentuate conflict and have legal implications as cancellation of rights is a serious violation of the Forest Rights Act.

Conflicts of the above nature would become commonplace if the issue is not recognised and addressed immediately. It should be an imperative for the forest corporations to work out the area that has been or could potentially be regularised to the forest dwellers under the FRA and modify their working plans accordingly. This will help them avoid revenue losses as well as maintain goodwill with the locals.