How the Van Gujjars perceive the Wildlife Protection Amendment Act, 2021 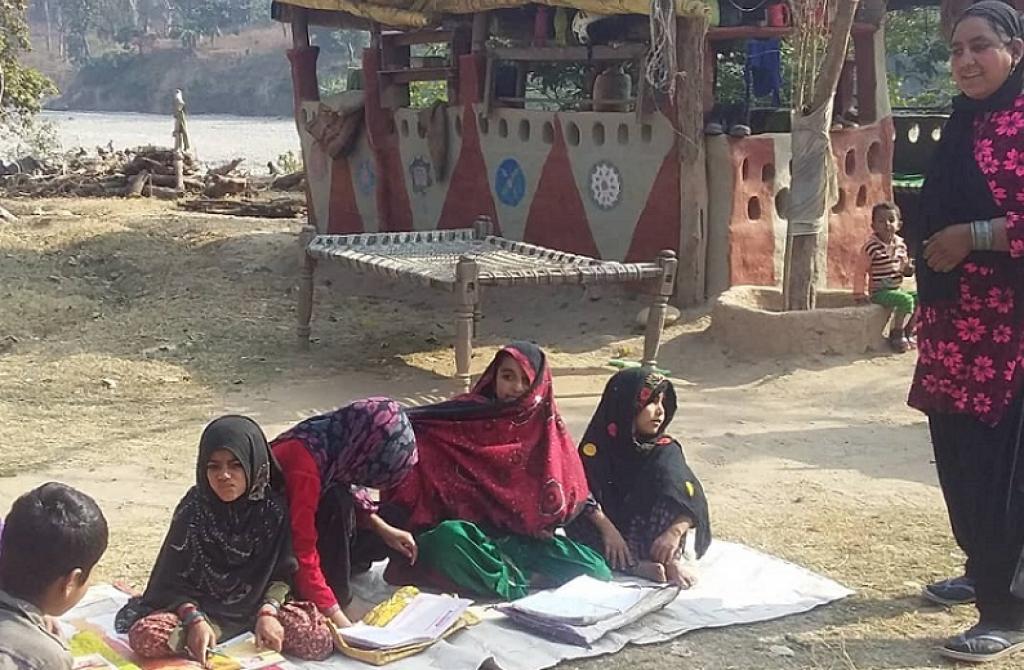 The Van Gujjars are a semi-nomadic pastoral community, which continues to practice seasonal migration across forests in Uttarakhand, Uttar Pradesh and Himachal Pradesh in pursuit of their pastoral livelihood.

However, the advent of the WLPA severely curtailed their ability to graze across pastoral spaces since the compartments wherein grazing were granted as concessions soon fell within the categories of protected areas.

Here, we would like to highlight certain concerns and suggestions within the provisions of the existing WLPA as well as in the 2021 amendment.

Rooted in the Raj?

The Scheduled Tribes and Other Traditional Forest Dwellers (Recognition of Forest Rights) Act, 2006, sought to recognise the land rights of forest dwellers that were historically denied within protected areas and other reserved forests.

But despite its enactment, the WLPA continued to hold precedence to displace and evict communities on the grounds of encroachment and threat to wildlife.

The WLPA, since its enactment, has sought to promote the idea of fortress conservation that seeks to promote wildlife tourism by creating a separation of forest spaces without human habitation.

Rather than integrating conservation and use practices of forest dwellers in wildlife laws, there has been pressure on forest dwelling communities once a protected area is notified to resettle to spaces outside forests.

The Act has conveniently negated the free prior informed consent of communities during the notification of protected areas and left out many forest dwellers in the lurch for tenure security.

Forest department authorities’ utilisation of Section 34A of WLPA by to remove so-called ‘encroachment’ has unfavourably affected the lives and livelihoods of the nomadic pastoral communities and forest dwellers across India.

The application of penal provisions under the WLPA on forest dwellers without actual proof of them being involved in poaching, wildlife trade and smuggling of wildlife skins reveals the colonial roots of this act and a pattern of criminalisation of forest dwellers by bureaucratic powers.

Many instances of Van Gujjars being classified as ‘poachers’ rests on the perceptions of criminality embedded while determining lives of de-notified nomadic tribes.

In fact, Van Gujjars’ activities such a lopping of leaves enables sustenance of herbivores. It also fosters healthier growth and density of the lopped trees.

The rotational grazing of the Van Gujjars and their buffaloes also help maintain water sources through embankments, removal of invasive species, facilitation in seed dispersal, remanuring the grazing areas and paths and creating fire lines within forests to protect the ecosystem for other species too.

The WLPA authorises the state government to declare any area as a wildlife sanctuary only after rights of affected persons are settled, according to Section 18 A.

It also bestows responsibility to make alternative arrangements for fuel, fodder and other forest produce for persons affected.

Section 35 of the Act gives the state government the power to notify the Centre to declare a national park. But this is to be done only once investigation and determination of claims and extinguishment of rights in relation to such forest land is complete.

Also, Section 38 V which bestows power upon the state government on recommendation of the National Tiger Conservation Authority to declare any protected area as a tiger reserve.

The Act does mention that the livelihood, developmental and other interests of people must be considered while preparing a tiger conservation plan. But, the categorisation of core and buffer zones where only the latter allows the possibility of coexistence must be revisited.

There have been no efforts to implement the clarification of the environment and tribal affairs ministries in 2010.

The clarification stated that recognition of forest rights must occur within national parks and wildlife sanctuaries prior to undertaking any exercise to displace, resettle or rehabilitate forest dwellers, even if critical wildlife habitats are to be notified in the near future.

Several efforts have been made under the WLPA to resettle Van Gujjars from Rajaji, Corbett, Govind Pashu Vihar and other protected areas, under the pretext of establishing critical tiger habitats, without recognition of Section 4(2) of the FRA. 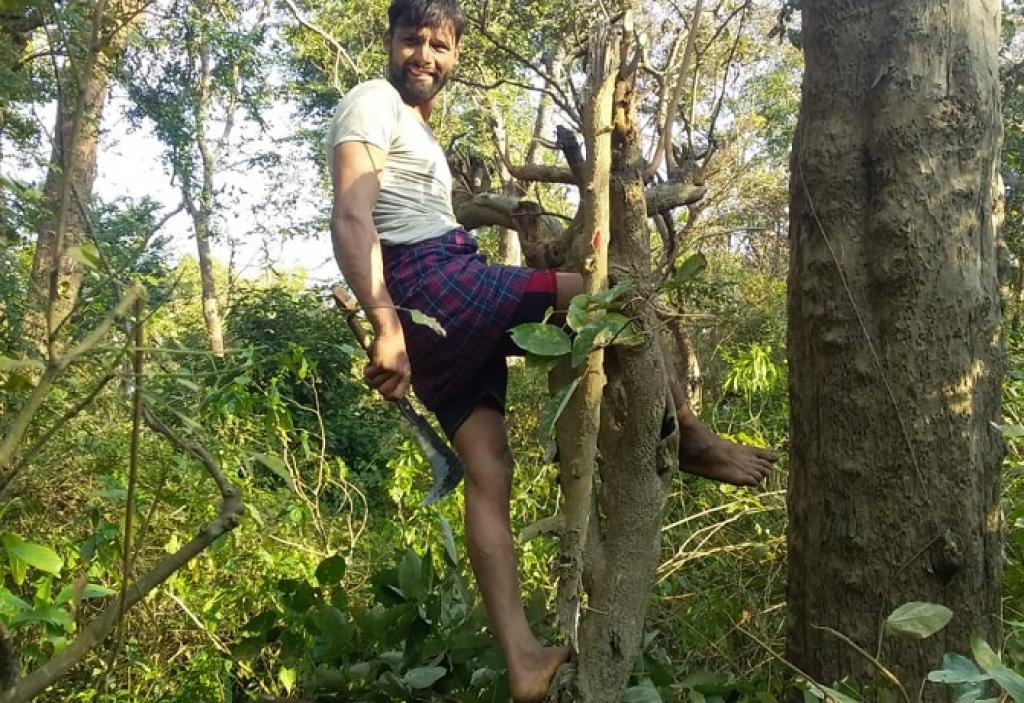 A Van Gujjar lopping the leaves of a mallotus tree for his buffaloes. The leaves are also eaten by elephants, whose survival across seasons is ensured by lopping. Photo: Pranav Menon

The interpretation of inviolate zones under the WLPA should reflect the inalienable nature of forest land rights and its use for forest purposes by forest dwellers only rather than be moulded to conserve one particular species of wildlife at the cost of others.

The modes through which the WLPA has sought to enhance conservation of keystone species such as tigers, elephants and leopards has not reflected in enabling greater species diversity with respect to other wildlife within forests we reside.

There has been little effort to implement Section 38 V (5) while declaring these inviolate zones as tiger habitats.

Thus, this provision is used as a pretext to evict forest dwellers and create separation between humans and wildlife while being silent about linear infrastructure, mining, tourism and other developmental activities within protected areas.

The WLPA has not harmoniously interpreted with the FRA to ensure forest rights are duly recognised, even in cases where coexistence between humans and animals was established and no severe loss to biodiversity and wildlife was noticed.

Our primary grievance is the lack of public consultation and participation prior to passing the amendments to the WLPA. Barriers to legal language and lack of vernacular translation of the text prevents forest dwellers participation to policy making.

The principle of free prior informed consent must move towards building consultative mechanisms on the ground with forest dwellers on laws which affect them.

The swiftness through which the amendments have been passed is very suspicious in a context where the government declares it is working to foster healthy and participatory implementation of WLPA with forest dwelling communities.

It is imperative that the amendments do not disrupt the role of the State Board for Wildlife that acts as a check and balance in favour of Standing Committees that are ad hoc in nature. Decision making by such authorities can alienate the claims of forest dwellers and their perceptions of wildlife.

We welcome the inclusion of the new Section 62A(l) that defines alien invasive species.

But the clause requires greater clarification on:

The recent 2021 amendment has taken a progressive step to foster the participation of forest dwellers within national parks while determining the management plan.

It has mandated the need to consult the Gram Sabha in protected areas falling under scheduled areas or areas recognised to possess forest rights based on claims under the Forest Rights Act, 2006.

We recognise the value of sustaining the forest and wildlife ecosystem as well as participatory potential of forest dwellers to foster coexistence and develop conservation ethic.

We are however concerned about how the word ‘local’ communities within these amendments is used for the clause that allows linear projects for development such as drinking water within protected areas.

We believe this clause can be misused since many claims can be made in the name of locals while alienating forest dwellers and their claims to coexistence.

We would rather suggest to cultivate decentralised models of water conservation by forest dwellers instead of these infrastructure projects that may cause irreparable damage to habitat and deteriorate health of wildlife. Such models of development may become precursors to human-animal conflicts in the region.

We are also concerned with how certain animals are classified as ‘vermin’. Several species which fulfill an ecosystem function should not be declared available to hunt if they cause inconvenience to humans.

We believe such interpretations privilege anthropocentric perceptions about wildlife by denying relatedness rather than bestowing agency upon wild animals too since the legislation pertains to their survival, protection and upkeep.

Apart from these specific suggestions, there must be clarity on how schedules are organised, names revised and maintained as well as clarity on how trade in live elephants will occur subsequent to the amendment.