International Day of Forests: Can India shift from a ‘plantation’ mindset to an ‘eco restoration’ one 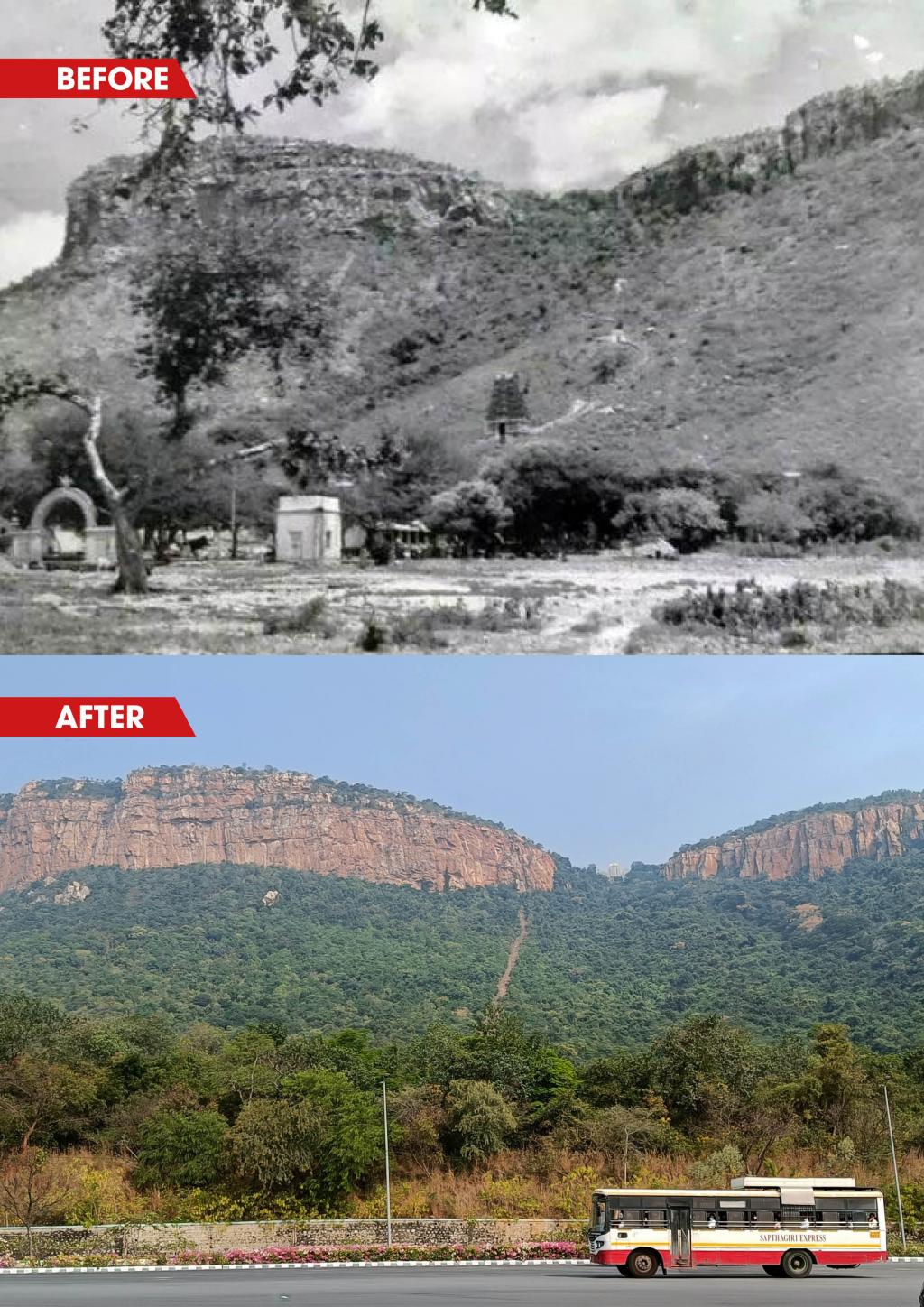 The denuded Tirupati-Tirumala Hills in the 1980s (top) and after four decades of eco-restoration (bottom). Botton photo by R Sreenivasa Murthy

The United Nations proclaimed March 21 as the International Day of Forests (IDF) in 2012. This year marks a decade of IDF. The day celebrates and raises awareness about the importance of all types of forests.

The theme for 2022 is ‘Forests and sustainable production and consumption’. But I worry about India’s forests.

The country has 307,120 square kilometres of forest in the open category, which increased by 4,203 sq km in the last two years, according to India’s State of Forest Report 2021.

I strongly believe that India’s forest management needs a paradigm shift from ‘working’ to ‘managing’ them for the country’s future prosperity and to take care of biodiversity conservation and ecosystem services they provide.

The only solution is an ‘eco-restoration’ approach.

Forestry at a crossroads

I, as a professional forester, who contributed to the eco-restoration of the landscape in the Panna Tiger Reserve, with recovery of tigers, feel that forestry and forest management in India stand at a crossroads.

The Green India Mission (GIM) was launched way back in 2010, with three-fold objectives:

Where we stand today is a question that needs answers.

The ‘Working plan Code 2014’ still signifies the working of coupes (a forest area wherein felling and silviculture operations are done in a 20-year cycle), but fails to bring in an ecosystem approach in planning and execution.

My concern is that somewhere, we have missed the bus without proper alignment between these two government documents in letter and spirit.

The GIM started from 2019-20 according to a government statement, with an annual target of two mha. Targets set and achieved over the last 12 years are a big mismatch.

Rising temperatures and changing monsoon rainfall patterns from climate change could cost India 2.8 per cent of its gross domestic Product and depress the living standards of nearly half the country’s population by 2050, according to a World Bank report.

The report further cautions that by 2050, Chhattisgarh and Madhya Pradesh will be in the red. The water catchments of this region and the permanence of the river systems and aquifer recharge is directly dependent on health of forests.

Open forests in the states of MP, Chhattisgarh and Maharashtra account for 74,295 sq km. How much of these degraded forests could we restore since the GIM’s inception and regular working plan implementation needs answers.

Forest restoration is a must for water security. The Union Ministry of Jal Shakti launch of a plan to plant trees along 13 rivers at a cost Rs 19,000 crore is laudable.

But governments need to bring in more wisdom on this aspect. Even now, the concerned government agency has not christened it as a river restoration plan.

We need to properly word our goals. The use of proper vocabulary changes the vision.

Let me give an example of forest eco-restoration done by a forest department. It has been four decades in the making from 1982-2022.

I hail from Andhra Pradesh’s Chittoor district. I studied botany at Tirupati from 1981-85. It was then the master plan for the restoration of the Tirupati-Tirumala hills started and forest restoration was part of it.

This tract is a part of the bigger Sheshachalam range of the Eastern Ghats. An area of 3,287 ha of forest was handed over to mirasidars or hereditary landowners by the Madras Presidency in the late 1800s and it became the property of the Tirupati-Tirumala Devasthanam (TTD).

Some 4,755.99 sq km of the hill ranges was declared as the Sheshachalam Biosphere Reserve in 2010. All these steps succeeded for providing a better legal status to the area to conserve and restore its biodiversity.

I took a keen interest over the last four decades in the eco-restoration process at Tirupati-Tirumala. I have witnessed a miracle happening there.

Last month, I made a one-day field visit with the help of the AP forest department to understand the process.

In the 1980s, the slopes of the ghat section facing Tirupati town were barren, with bare rocky outcrops showing up.

It was then that a Tirumala Forest Division was created. Its main focus was to beautify the Tirumala hills with plantations and gardens. This it did by planting an evergreen single exotic species Acacia auriculiformis (a native of Indonesia, Australia and Papua New Guinea) on 890 ha over the last four decades.

The adjoining forest and wildlife divisions adopted a simple eco-restoration model. People in the vicinity changed their lifestyles which led to cattle and sheep grazing along the hill slopes declining drastically.

The Acacia auriculiformis has now spreading naturally in all directions because of its profuse regeneration capacity. The surrounding barren forest lands became dense forests with simple practices of reducing biotic pressure and taking care of fire protection.

Faunal components including herbivores (deer species and elephants), carnivores (leopards and a few tigers) made a comeback.

However, there is a spoiler here.

The plantation drive done by the TTD division has been successful by all counts. Except species selection.

The main concern of government agencies in any forestation programme is the ‘survival percentage’ while they get evaluated. Even a three-year-old ‘live plant stub’ is counted as surviving after getting browsed or hacked.

So which plant species does the forest department select usually for afforestation? Usually those that are non-palatable, have good coppicing (ability to grow new shoots from stumps) power even after getting browsed, are less water-demanding and are fire-resistant.

Forest departments prefer such species even if they are Invasive Alien Species (popularly known as IAS).

This mistake occurred in TTD too. Fortunately, BMK Reddy, the chairman of the AP State Biodiversity Board took note of it three years back.

The TTD forest department is now in the process of replacing this exotic species, which may change the floral / faunal composition and ecology of the Sheshachalam range in the future.

It is my wish as a former forest professional that 43.3 per cent of India’s open forests are restored for sustainable production and consumption at the earliest. Let wisdom prevail on this World Forestry Day 2022.

R Sreenivasa Murthy is a retired IFS officer. He is currently the director of RVNL and a wetland expert based in Bhopal