Revisiting the tigers vs tribals trope

Instead of rejecting forest dwellers rights over land to conserve wildlife, a sincere and responsible implementation of FRA must be sought

The Soliga tribe, which includes 16,500 people, live in some 61 hamlets in the ecologically rich forests of Biligiri Rangana Hills in Karnataka. Photo: Wikipedia

The petition filed with the Supreme Court by hardline conservationists questioning the constitutional validity of the Scheduled Tribes and Other Traditional Forest Dwellers (Recognition of Forest Rights) Act, 2006 (FRA) is stoking fears: That recognising the land and other rights of our forest dwellers will undermine wildlife conservation.

Many of our protected areas (PA) are home to historically marginalised human communities while also being key refuges for endangered wildlife. This juxtaposition begs the question: How reasonable is their fear, and how well does it stand up to careful scrutiny?

Let’s begin with some context.

All our PAs are created under the Wild Life (Protection) Act, 1972 (WLPA). The WLPA protects both wild species as well as the habitat (lands) they use.

Often, our PAs (mainly Wildlife Sanctuaries, National Parks and Tiger Reserves) were carved out of existing reserved forests. The reserved forests, in turn, were usually created under the Indian Forest Act, 1927 or its subordinate laws to generate revenue for the colonial state. The British cared little for the homes and farms of local communities living within and using these forests.

This disregard for people’s presence and use of forest areas continued even after independence: The new WLPA expressly required that pre-existing homes, cultivation and other uses of the forests by local people be legally recognised and settled before declaring a PA; yet it has very rarely been implemented fully or fairly.

Hence, with nearly every PA notification, the long-standing presence and use of forests by tribal and other forest-dwelling people was rendered illegal virtually overnight.

Thus, most communities who have lived in and used our forests even before wildlife conservation was an idea, have been subject to everyday harassment, threats of eviction, and actual evictions by forest departments for decades.

And significantly, wildlife conservationists, by and large, have conveniently chosen to go along with the departments’ contempt for local communities. They have not cared to seek full or fair implementation of the rights recognition and settlement provisions of the WLPA, leave alone the FRA.

It was against the backdrop of this disgraceful and unjust manner of creating and managing our PAs, that the FRA was enacted — to help correct injustices and broaden the base for conservation by empowering forest-dwelling communities.

The FRA recognises and grants individual property rights to forest-dwelling people on lands they have inhabited and cultivated historically. In addition, it also provides community rights over forest areas not only for the purpose of sustenance and livelihood among others, but also for conservation.

But the enactment of the FRA caused great anxiety and grief to some conservationists, whose allegiance to wildlife conservation, unfortunately, seems inseparable from a contempt for humanity and justice.

Prominent among the canards they have propagated in their legal challenge to the FRA is the dogma that wildlife conservation is only possible if people are removed from wildlife habitats; and that it is inevitably undermined by the granting of individual and community forest rights under the FRA.

It is instructive, therefore, to examine, with an example, the conservation consequences of recognising forest rights within a PA.

The Soliga tribe, currently numbering around 16,500 across some 61 podus (forest hamlets), have lived in the ecologically rich forests of Biligiri Rangana Hills in Karnataka for hundreds of years. The earliest written record of their presence goes back to 1807.

The Government of Karnataka, in 1974 and 1987, notified its intent to create the Biligiri Ranganatha Temple Wildlife Sanctuary (BRT) over an area of 540 square kilometres. This included 32 sq km of ‘enclosures’, comprising a large temple enclave inside the forest, and corporate-owned coffee estates extending over some 1,800 acres.

The sanctuary was declared in a final notification of 1994, which stated, among other things, that “the Revenue Department have not (sic) enquired and determined… the right of any person in or over the land comprised within the limits of the sanctuary or National Park as per provisions of Section 19 to 26 of the Wildlife (Protection) Act 1972.” 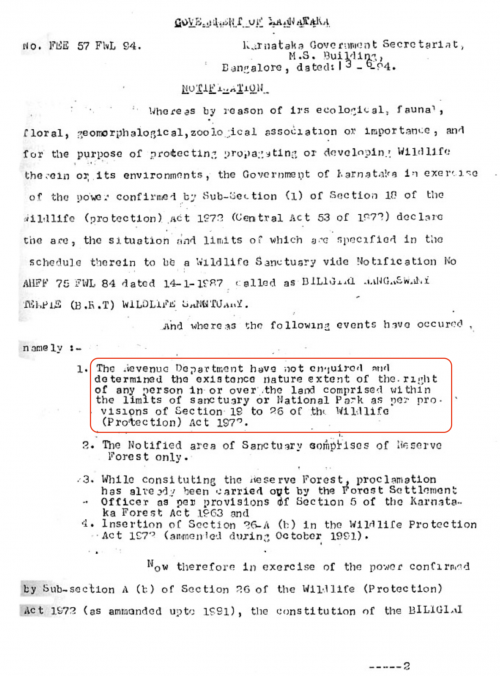 A portion of the BRT Sanctuary notification

In inadvertent honesty, the BRT notification itself admits that the WLPA had not been followed while creating the wildlife sanctuary.

In addition, the notification conspicuously fails to mention the existence of thousands of Soliga people in this landscape, even as it faithfully records corporate-owned enclosures in the middle of the sanctuary.

No wildlife conservationists protested the fact that a sanctuary had been created on such shaky legal, social and ethical foundations that, in the future, could undermine the very conservation outcomes they cared about.

Meanwhile, it is not as if the forest department actually forgot about the Soliga although they omitted the entire community from their notification. The department had already curtailed their shifting cultivation and forced the Soliga into permanent settlements that make up most of today’s podus.

Once the sanctuary was notified, there were constant threats of eviction, now aided by a notification that did not even record their presence, thereby rendering most facets of their everyday life illegal. There was also unending harassment of the Soliga for their collection and sale of honey, gooseberry, lichen and other forest produce. This was topped by a total ban in 2006, which disrupted livelihoods of hundreds of Soliga who lacked recourse to any other income.

With the passage of the FRA in 2006, the Soliga applied for individual and community forest rights under the new law. Even as their claims were being reviewed and granted (until recently, about 1,800 acres of Individual Forest Rights for nearly 1,300 families; and Community Forest Rights on over 400 sq km of BRT), the Soliga learnt from newspaper reports that the National Tiger Conservation Authority had approved a proposal by the Karnataka Forest Department to declare BRT a tiger reserve.

Yet again, the Soliga were nowhere in the picture. To add insult to injury, it went on to declare 350 sq km of BRT, including some 20 podus as part of the reserve’s “core area”. This renewed the threat that hardline conservationists would pressurise the Soliga to ‘voluntarily’ relocate to create a people-free Critical Tiger Habitat.

Now, leaving aside the Soliga for the moment, the key conservation question to ask is: What has been the consequence for tigers and other wildlife in BRT from granting Soliga the right to reside, cultivate and use its forests?

Ask this to a hardline conservationist, and the answer is pat, certain, and absolute: Tigers need inviolate areas to thrive, and they are bound to decline in the presence of humans and their uses in tiger habitat.

Over the years, a small, elite and well-connected clique of conservationists, bolstered by hatchet-job science, have elevated the dogma of inviolate habitats to the status of an ecological principle and conservation canon. So much so that it even finds mention in the WLPA as a requirement for the core of tiger reserves.

Thankfully, today, after multiple rounds of rigorous tiger and prey population estimation, we are in a position to interrogate this dogma; we can ask if inviolate habitats are invariably necessary for tigers to thrive and whether rendering previously peopled landscapes inviolate, invariably leads to a ‘recovery’ of wildlife populations.

Data from BRT, gathered in 2013 as part of government’s countrywide tiger population estimation exercise, show that, after Kaziranga, BRT reports the highest tiger density (11.3 tigers / 100 sq km) in India. These tigers live on the same lands on which the Soliga have been gathering forest produce, now with legal rights.

Even at around half its density, BRT would still be in the same league as famed inviolate tiger habitats like Kanha (6.4 tigers / 100 sq km.) and Ranthambhore (6.1 tigers / 100 sq km). At the same time, it would also have credit for recognising the centuries-old residence, cultivation and utilisation of its tiger habitat by thousands of Soliga tribals. Whatever could the problem be with that?

What's the problem then

The dogma that tigers cannot thrive in landscapes with people has a corollary: That tigers and their prey will invariably rebound if humans — usually the poorest and the most powerless — are removed from tiger habitat.

Bhadra Tiger Reserve provides an interesting test of this corollary: In 1997, its tiger density was estimated at 3.4 tigers / 100 sq km when it still housed some 11 villages and more than 450 families, with their accompanying uses of its forests. In 2013, well over a decade after these villages were relocated and its tiger habitat was rendered inviolate, Bhadra reported 2.3 tigers / 100 sq km, while prey populations showed no increases either.

Thus, BRT shows the claim that inviolate areas are a necessary condition for tiger populations to thrive for what it really is: A petty dogma rather than an ecological principle. Similarly, data from Bhadra TR discredits the corollary that rendering an area free of human presence and use invariably results in the ‘recovery’ of tiger or prey populations.

To be clear, there is evidence from careful work in Gir and Rajaji National Parks showing recovery of wildlife populations following the relocation of Maldharis and Gujjars from them.

But before invoking a process as extreme and painful as relocation for conservation, it is only fair that the communities involved first possess legally- defensible rights that may then be sought for acquisition through due process.

And even if implemented, like in Bhadra, relocation is no guarantee that wildlife will rebound. Ecological processes are incredibly complex and any scientific understanding we may claim about them is always circumscribed by a vast ignorance and constant uncertainty.

Besides intrinsic complexity, there is also much that is dependent on history, context and contingency in determining the conditions under which wildlife can thrive. Unintelligent adherence to the dogma of inviolate areas, thus, is neither helpful to wildlife nor fair to our most vulnerable people.

Unfortunately, the experience of exclusion and disenfranchisement with their own lands is not a unique experience of the Soliga, but has been widely recorded and reported among various Adivasi communities across the country.

By patently lying that the FRA is an instrument for the giveaway of forests, paving the way for the destruction of wildlife, hardline conservationists have been misguiding not just the public but also the Supreme Court.

In BRT, all Individual Forest Rights granted have merely confirmed rights over existing habitation / cultivation. The areas on which Community Rights have been granted are not only forested, but support some of the highest tiger densities in India, even as the Soliga derive identity, livelihood and dignity from it.

The answer therefore is not to reject the FRA, but to seek its sincere and responsible implementation.

The conservation of our wildlife and our forests is critically important, as is the correction of cumulative injustices that our forest dwellers have endured. To see these two objectives in opposition is not only deeply disingenuous, but also dangerously ignorant of social and ecological complexity.

In a country like ours, characterised by deep structural inequities perpetuated over generations, the opportunity the FRA provides to make conservation more just and more fair is one we simply cannot afford to squander.