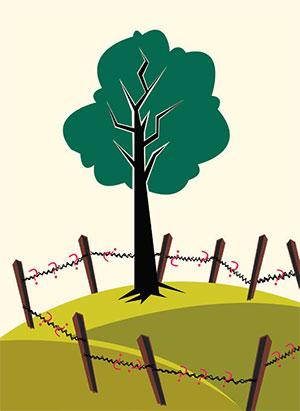 How should India manage its forests? This is a question which is, strangely enough, rarely asked and never really answered. And it would seem that there is no reason to ask it, because there is no reason to worry about the state of forests in the country. All is well on this front, says the government.

On the face of it, they seem right. The State of Forest Report 2017—produced by the Forest Survey of India and based on satellite imageries—finds that the forest cover is, by and large, stable: between 2015 and 2017 a mere 0.21 per cent change is noted. Today, forests cover some 21.54 per cent of the country. The area, classified as “recorded” forests—land under control of the forest department—spans some 23 per cent of the country. So, it would seem that the forest story is good news. Not so fast, though.

First, we need to understand where these trees are growing; second, we need to understand the quality of the forest that is so stable. As per the State of Forest Report, the definition of forest cover includes all lands more than one hectare with a tree canopy of over 10 per cent, irrespective of land use, ownership and legal status. In other words, this 21.54 per cent of forest cover includes trees growing on the government’s forestland as well as on private lands. But it is not possible to estimate the area of forests in the “recorded” forests because not all state governments have completed digitising the boundaries of these lands. So, we also don’t have a complete picture of the state of these forests in the classified and protected forestlands.

As of today, according to the report, some 16 states have digitised boundaries of forests. This data, in fact, shows that the states have “lost” substantial forestland. Almost 70,000 sq km, which was previously recorded as forests, is not “found” when records are digitised. This is roughly 12 per cent of the recorded forest area, and is critical to complete the digitisation of boundaries across the country as well as to know the actual state of land under reserve or protected forests.

Then there is the question of the quality of forests. According to this assessment, of the 21.54 per cent of the land under forests, only 3 per cent can be classified as very dense—tree canopy density of 70 per cent or more. Roughly 9 per cent of the land is moderately dense (40-70 per cent tree canopy density) and another 9 per cent is open forest (10-40 per cent tree canopy density). The report also finds that between 2015 and 2017, the category of forests classified as “very dense” has increased by some 9,000 sq km, while the category of “moderately dense” forests has decreased and there is some increase in “open” forests. So, it would seem that the quality of forest cover has improved and “moderately dense” has been converted to “very dense”. Good news? Not so fast.

The reasons for the change, as reported, are varied—from improvement in satellite imageries, to protection and to plantations outside the “recorded” forestlands. This then is the nub of the matter.

Besides why are we protecting the 0.76 million sq km of recorded forestlands? What is their purpose? Is it to plant trees for productive purposes? In which case, who will plant and who will benefit—forest department or village communities who live in these habitats? Or, is India’s forestland primarily meant for conservation purpose—hands-off forestry, in other words. So, will we grow and cut trees, not in recorded forestlands, but in private lands? Questions not asked. Not answered.

But the 2017 report does provide important nuggets of insights into what is happening today. According to its estimate, the annual production of timber from recorded forestlands is 4 million cubic metres (cu m) and so most of the demand for timber is met from outside forestlands or from timber imports—which are spiralling. The report also makes an assessment of the total timber growing potential of the lands outside recorded forests and this comes to some 74.5 million cu m. Compare this to the 4 million cu m, which is produced from the vast lands under the forest department and you will begin to understand who is actually growing trees and where.

In fact, almost 30 per cent of the growing stock—an indicator of forest health and productivity—is outside the “recorded” forests and this is increasing, faster than the growing stock in the lands controlled by the forest department. The difference is the “nature” of tree species. While the growing stock in forests is mainly sal, teak or pine—timber species; outside it is mango, coconut, neem and bamboo—horticulture and plantation species. And this is when growing and cutting trees in India is a complicated business, with multiple permissions required to cut, to transport and to sell.

So, the question remains. What are forestlands meant for in India? Let’s continue to discuss this.