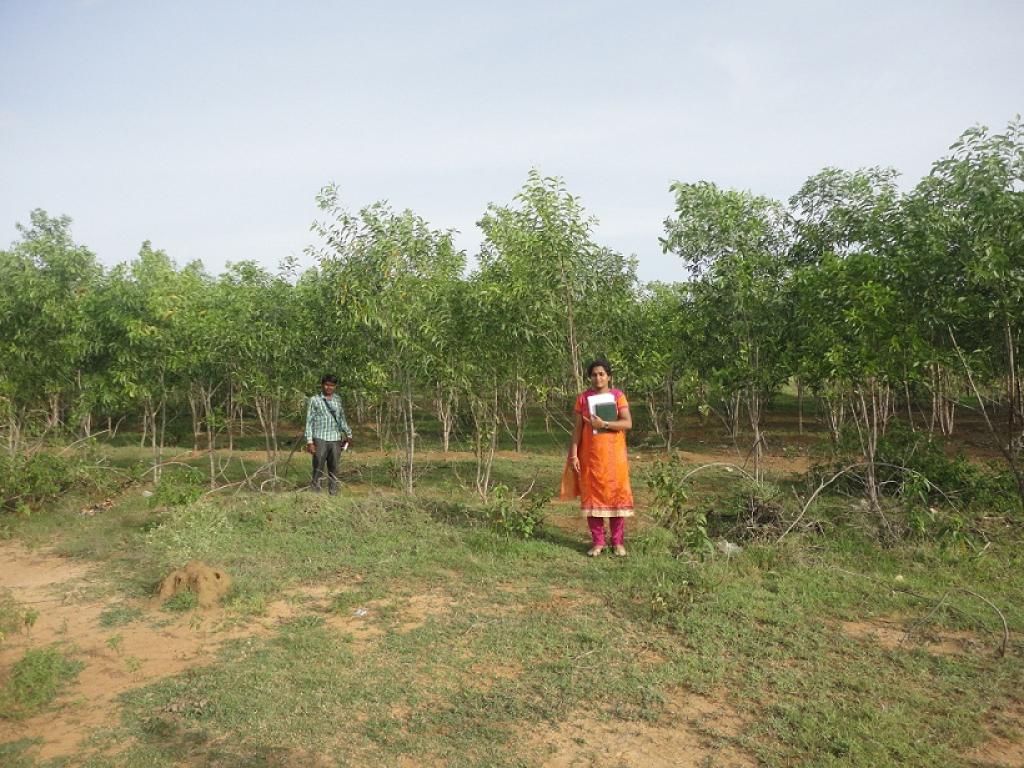 Tumakuru district in south-eastern Karnataka is something of an aberration. Located in the heart of the dry Deccan Plateau, it chiefly consists of elevated, forested land. So, in stark contrast to the landscape to its north, it is very green. Though inland (it is a one-and-a-half-hour drive from Bengaluru), it is known for the production of coconuts, because of which it is called ‘Kalpataru Nadu’, the land of coconuts. And because Tumakuru has always been an exception rather than a norm, it is setting the trends in another field for the rest of India: responsible forestry.

Despite the fact that Tumakuru has a forest cover of 1,292.76 sqkm, which is 8.58 per cent of the total area of the district, with an annual rain fall of 575 mm, the forest department is making highly appreciable, untiring efforts to increase the density of degraded forests and green the highways and rural roads.

But it is the innovative nursery and planting technology followed by forest officials that is reaping dividends. For the greening of urban roads and highways, taller plants of 3-4 metres are raised in the nursery within a year by using bigger size containers, selected seeds of known origin and application of organic manure. Pits are dug in advance in April along roads and highways, by using machinery. When the first rains arrive in May, planting is carried out. Before planting, the container plants are dipped in water so that the plant can have moisture for a considerable period of time after planting. The plants are provided with supporting sticks, usually 3 metres long and 15 cm in girth, to prevent them from swaying due to wind and are tied with thorny phoenix leaves to protect them from cattle. With the available moisture, the plants get established. Irrigation facilities are provided for watering the plants during summer. More than 95 per cent of the plants get established well and those that don’t are replaced the subsequent year.

The degraded forest blocks are selected for planting under the KFDF scheme. Trenches measuring 4.2 metres in length, 0.50 metre in width and 0.50 metre in depth are dug with a space of 4 metres between each by using machinery.  The container plants of 8”x12” are dipped in water before planting and 2 plants are planted in each trench with DiAmmonium Phosphate (DAP) application. Since the soil in the trench is loosened, it helps the plants’ roots penetrate deep and absorb soil moisture. With proper watch, the seedlings get well-established and the success rate becomes high. In spite of careful planting and subsequent upkeep, there maybe some casualties due to damage caused by porcupines and hares. Generally, this type of planting is carried out in state forest areas.

By using novel planting techniques, the officers of the Tumakuru forest division are doing a wonderful job of greening the district successfully and this will increase the density of forests, leading to an improvement in the ecological health of the region. The department’s social forestry division raises roadside plantations of mostly tamarind and then hands them over to the neighbouring land owners for protecting and enjoying the usufructs by properly maintaining them. In this way, the goodwill and support of the local farmers are gained for the successful upkeep of the roadside plantations.

In stark contrast, other states plant 2-3 metres high plants in small-sized pits. Moreover, the techniques employed to guard the trees are not effective resulting in more number of casualties.

Who can mention Tumakuru without referring to Salumarada Thimmakka? The Saalumarada Thimmakka Tree Park established in the Gubbi forest range, on the road which leads to Tumakuru, is in recognition of the great service rendered by the 106-year-old environmentalist, who planted more than 8,000 trees in 65 years. The park plays a major role not only in greening the district but also in motivating students and other members of the public to love trees and in create an interest in conserving forests.

The park was inaugurated by Karnataka’s Minister of Forests, R Shankar on July 7, 2018. It has got 40 different species of plants with two pergolas (arched structures in a garden or park consisting of a framework covered with climbing or trailing plants), sitting benches, drinking water facilities, a 2.5-km-long walkway ringing the park from inside and a children’s play area with the latest facilities. Swietenia mahogani, Pongamia pinnata, Bambusa bambos, Dendrocalamus strictus, Madhuca indica,Syzygium cumini, Pterocarpus marsupium, Azadirachta indica, Dalbergia latifolia, Ficus glomerata, Ficus benghalensis, Ficus religiosa, Melia dubia, Cordia myxa,Thespesia populnea, Michelia champaca, Terminlia catappa, Lagerstromia speciosa and Terminalia tomentosa were planted on the park during the month of March and have established themselves well. The park can be visited without paying any entrance fee.

If the novel and scientific techniques followed by the Tumakuru Forest Division are emulated throughout the country, increasing India’s forest cover and ecological health won’t remain a distant dream.