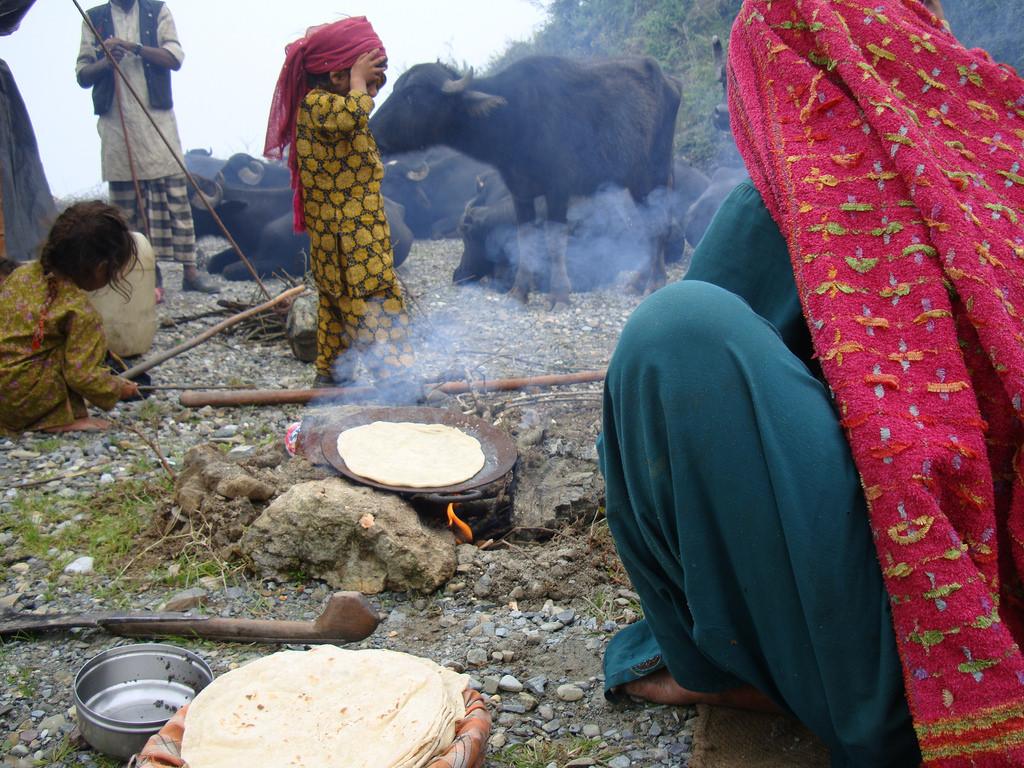 A Van Gujjar woman preparing 'chapatis' at a rest stop during the tribe's semi-annual trek in the Himalayas Credit: ILRI/Susan MacMillan/Flickr

Van Gujjars are nomadic buffalo-herders inhabiting the foothills of Himalayan states like Jammu and Kashmir, Himachal Pradesh and Uttarakhand. They are one of many tribes who have lived in deep dependence on wild habitats in India and for whom, “transhumance” (the practice of moving livestock from one grazing ground to another in a seasonal cycle) has been a way of life for centuries. Much before British colonisers mapped the land, so that the State could easily identify and standardise the ownership and control of resources, especially forests. Also, much before the concept of inviolate spaces for wildlife conservation descended onto Indian “environment” policy in the form of the 1972 Wildlife Protection Act. And yet, today, the idea of “home” for Van Gujjars has been made precariously tentative.

Making of the ‘encroachers’

The commercial exploitation of forests through demarcation by the British using the India Forest Act 1927 followed by the conservation legislations of post-independent India had one thing in common—the alienation of forest dependent communities like the Van Gujjars was inherent in both, seemingly opposite paradigms. The colonial mindset precipitated the view that the “scientific management of forests” would aid the process of extraction, which was inevitable for “development”. State control over forests was ascertained by first making the forest department, the largest land owner of the country, with a total geographical area of 23 per cent under its ownership and then making it responsible for protecting forests from people who were its original occupants as well as custodians.

The “Forest Settlements” undertaken in vast territories of the country by the British, failed to consider the many settlers, Adivasis and pastoralists who lived deep in the heart of the forests, practicing occupations, actually cultures that were founded on human-nature bonds. The Wildlife Protection Act even had provisions for notifying protected areas after completing the “settlement of rights” of communities that were dwelling in these areas. Unfortunately, yet again, this was a task not done. “Encroachers”, the dubious label applied to the most vulnerable and dependent “illegal” occupants in forest areas across India, evoked great fury of the judicial and regulatory institutions calling for immediate evictions, even as the juggernaut of urbanisation and neo-liberal development legally usurped vast stretches of forests.

It was actually decades after forest-dwelling communities were repeatedly displaced off their lands and livelihoods, after many years of struggle and assertion of the idea that the survival and dignity of forest- dwelling peoples was actually at stake, that the historical legislation called the Scheduled Tribes and Other Traditional Forest Dwellers (Recognition of Forest Rights) Act, 2006 (FRA) was passed by the parliament of India in 2006. This legislation, in its preamble, acknowledged that failure to recognise the forest rights of such forest-dwelling communities resulted in a historical injustice (which the FRA seeks to correct) because such forest dwellers are integral to the very survival and sustainability of the forest ecosystems.

The Act provides for communities classified as Other Forest Dwelling Communities and Scheduled Tribes to be eligible for individual and community forest rights (even within “protected areas”) under Section 3 (1) of the legislation. Under Section 5, they also have the right to conserve and manage forests, including wildlife areas. Further, it is Section 4(1) of the Act, which gives it much-needed teeth, bolstering this remarkable piece of legislation over other conservation laws that have denied rights to forest dwellers. Section 4(5) says that the claimants cannot be evicted without the process of recognition of rights having been completed and that the rights have already been vested with the forest dwellers.

That a decade after the passing of this Act, its implementation is in the midst of myriad challenges— ranging from institutional to political to even judicial—shows the deep-seated nature of the bias against forest-dependent people within the system. And so when the Uttarakhand High Court on August 16, 2018 ordered for the removal of Van Gujjar families from the Jim Corbett National Park, it said in no uncertain terms, “The Van Gujjars are a constant threat to the wildlife. The State Government, however, has taken a prompt decision to protect the persons who have encroached upon the river banks and river beds…Prima facie, the proposal taken to rehabilitate the Van Gujjars is against public policy”. The court was responding to the State Government’s formulation of a policy to rehabilitate 57 families from the Corbett Tiger Reserve. For now, the Supreme Court has asked to maintain status quo on the order of the High Court. This happened on September 10, 2018, after intervention by forest rights activist Tarun Joshi, who appealed in the matter.

It is not just the Van Gujjar families around Corbett that are under threat but also in the adjacent Rajaji Tiger Reserve in the stretch ranging from Ramnagar in Nainital to Tanakpur. The forests that now fall in the boundaries and buffers of the Corbett and Rajaji Tiger Reserves have been the winter grazing grounds for the buffalo-rearing Gujjars for a hundred years. The forest department’s own working plans, dating back to 1952, have recorded the grazing activity of the community. But once the parks were notified and the area under the tiger reserves kept being enlarged, the spaces for the pastoralists have been shrinking. According to various documented testimonies, the Van Gujjars in both the parks have faced tremendous repression and harassment at the hands of the forest department, especially over the last decade. Almost 1,000 Van Gujjar families have had no choice but to accept relocation from the Rajaji Reserve. In the case of Corbett, attempts were made at formulating rehabilitation policies, but nothing materialised.

The Forest Rights Act in 2006 came as a ray of hope for the pastoralist families and in February 2007, the High Court of Uttarakhand had even ordered for the recognition of their rights under the legislation. However, in recent High Court orders, the Justice Rajiv Sharma bench has questioned the “eligibility” of the Van Gujjars under the FRA, saying that they have been residing in the park premises only for 40 years. Today, about 102 families in Corbett and another 110 in Rajaji, still depend on the forests. With support from civil forest rights activists, individual and community claims have been filed in both areas, but there is no response from the administration yet.

In general, the process of getting claims accepted in protected areas and “critical wildlife habitats” has been more difficult because of the pressure of the “tiger conservation lobby”. In March 2017, the National Tiger Conservation Authority issued an order disallowing recognition of rights under FRA in Tiger Reserves.

It remains to be seen whether the Supreme Court will ultimately do justice to the Van Gujjars by overturning the decision of the Uttarakhand High Court. Interestingly, the same bench which ordered the eviction of the Van Gujjars, comprising Justice Rajiv Sharma and Justice Lok Pal Singh, in July this year in a PIL, declared “the entire animal kingdom” as legal persons and the citizens in the State of Uttarakhand as “persons in loco parentis as the human face for the welfare/protection of animals.”

If the court were to consider the buffalo herds feeding on the wild grasses in the terai forests as legal persons, would they have the same rights as the tiger? Or if we were to assess who really has ensured, by their way of life, a peaceful co-existence with, and thus the protection of the tiger or for that matter any creatures of the wild, would not the pastoralists be the ones, even without being declared as “legal parents”. But as the Orwellian quote goes: All animals are equal and some animals are more equal than the others. And the same goes for the citizens of this country.