Freeing bamboo from the state

The Union Ministry of Environment and Forests (MoEF) has written to states to include bamboo in the list of minor forest produce (MFP) and to take steps to facilitate its use, sale and management by communities. The letter, dated March 21, is addressed to all chief ministers. It acknowledges the provisions of the Forest Rights Act (FRA), giving communities the right to collect, use and dispose bamboo as an MFP.

Will this letter have the effect that seems intended: to free bamboo from the state’s stranglehold?

Bamboo (comprising about 130 species) is spread over nine million hectares (ha) of forests in India, with heavy concentration in central and north-eastern states. Several million forest-dwelling households depend on it for housing, household and agricultural implements, handicrafts and for employment.

About 1,500 different uses have been documented, earning bamboo the nickname “green gold”. Bamboo also forms a crucial ecological part of many forest types, providing shelter and food to many wildlife species.

As in the case of many other common pool resources, the state since colonial times has had firm control over bamboo. Ignoring the fact that it is a grass, the Indian Forest Act, 1927, classified bamboo as “timber”. Trade and commercial use in particular have been monopolised, rendering communities subject to the whims of official policy.

This policy has for the most part been heavily weighed in favour of industry, providing heavy subsidies—for many decades, for instance, paper mills were given bamboo at ridiculous prices like Rs 1 per tonne.

In many parts of India bamboo has been wiped out by industrial use, causing severe distress to adivasi and other forest-dwelling communities, not to mention loss of wildlife. Even after the promulgation of FRA, state policies continued to monopolise bamboo.

The committee on FRA set up by MoEF and the Ministry of Tribal Affairs (MoTA) found, for instance, that in Gujarat the Central Pulp Mill continued to be given bamboo from forests over which communities were making claims under FRA. Partly due to this, the Kotwalia, a Particularly Vulnerable Tribal Group specialising in bamboo products, found it difficult to access the raw material. The state government had even taken an “in-principle” decision to renew the company’s lease, in violation of FRA. Bamboo-based industry has been coveting India’s vast bamboo resources for major commercial gains, with innovative products ranging from furniture and flooring to housing and food. One estimate puts the value of this industry at Rs 26,000 crore by 2015. A change in governance to community-based management is essential to ensure that local people have rights to first use of bamboo, a say in and benefits from other uses, and power to conserve it against depredations of industrial use.

One aspect of the legal straitjacketing that bamboo has faced so far is the forest department’s control over transit permits. So pervasive is such control that even communities that have been given full community rights under FRA are unable to use their right to sell bamboo. For instance, Mendha-Lekha village in Gadchiroli district of Maharashtra got a title to community forest resources under FRA in August 2009.

But it has not been able to sell a single pole of bamboo since then because the department is refusing to issue transit permits.

The MoEF letter directs states to ensure that in areas where community rights are obtained, or for bamboo grown on non-forest lands, such permits would be issued by the gram sabha. Whether this will be honoured by the department in situations such as that of Mendha-Lekha, remains to be seen.

The bigger problem, of course, is that community rights have hardly been exercised. Data collated by MoTA up to the end of February 2011 show that about 51,500 community claims have been filed and 3,669 titles given. But an analysis by the MoEF-MoTA committee on FRA showed that many or most of these are claims to development facilities, not to forest resources.

Information on the extent of these claims is scantier; the five states (Chhattisgarh, Maharashtra, Rajasthan, Uttar Pradesh and West Bengal) from where data are available of community titles given collectively make up 21,258 acres (about 8,400 hectares). Compare these figures with the following: there are at least 170,000 villages in the country that have forests within their boundaries, covering about 32 million hectares (half of India’s total forest cover).

Bamboo forests must be healthy

The MoEF-MoTA Committee pointed out, in detail, the severe hurdles in the way of community claims, including lack of information among communities and officials, absence or inaction of institutions to be set up to process claims and deliberate obfuscation and delays by official agencies. Thus far, neither MoEF nor MoTA have done much to address these issues. So the stipulation that transit permits can be issued by the gram sabha in areas where communities get rights, will apply to only a tiny minority of the total villages that should deserve to get access and control over bamboo. The letter also does not talk about transit rights for families getting individual rights to bamboo, which they can claim under FRA. 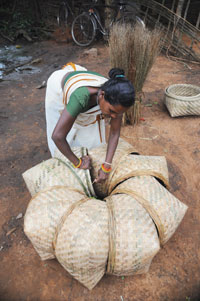 Additionally, while the overall intent of the MoEF letter is positive, some of its language will create ambiguity on the ground. For instance, it states that gram sabhas are to make management plans for commercial harvest of bamboo in consultation with the forest department. The intention may be to ensure that the harvest is sustainable, but given the power equations between the department and the people in most areas, this is likely to be a stumbling block for communities.

Nevertheless, it is also vital to ensure that bamboo forests remain healthy and are not only able to sustain the livelihoods of communities but also retain their crucial ecological functions. Their role in harbouring threatened wildlife species too needs to be safeguarded. Where they have degraded in the past, they need to be regenerated to a healthy status.

Several communities that have lost their knowledge or institutional strength over the past few decades of top-down governance, would need help in terms of technical, institutional and other inputs. Both civil society and the forest department have a crucial role in this; but they will have to transform themselves into being facilitators, getting rid of attitudes of superiority and assuming control.

The MoEF letter requires a review of bamboo extraction every three years, and corrective measures taken if over-extraction is seen. However, it should have also specified that such a review (or regular monitoring) must be community-based rather than only by the forest department.

The MoEF letter is one small step in the direction of freeing forests from the clutches of the state. But it will have a positive impact only if the systemic problems plaguing the implementation of FRA are dealt with, and if its own internal inconsistencies are sorted out.

Moreover, it needs to be urgently supplemented by many other measures, such as changes in the Indian Forest Act in line with the FRA, to enable greater community empowerment, more infusion of independent knowledge into management, and stronger public oversight over forest conservation and use.

Ashish Kothari is with Kalpavriksh, Pune