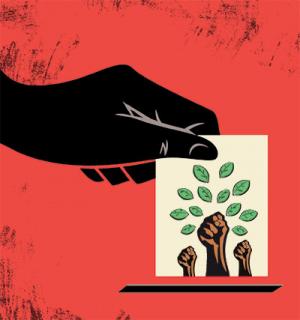 We are in the middle of the general elections to select the new government. Whichever way the verdict swings, one issue that will become the priority of the new government is the management of India’s natural resources. This is not an ideological option, but a pressing need of people irrespective of their electoral preferences. Here’s why.

Let’s go back to the 2014 General Elections that elected the country’s first post-independence born Prime Minister, Narendra Modi. As this column argued at that point in time, the then ruling United Progressive Alliance (UPA) government lost due to its mismanagement of natural resources.

We remember the rampant corruption and high profile scams that dislodged UPA — the 2G scam, coal allocation and gas pricing scandals. All of them were a cumulative result of non-transparent ways of managing natural resources. These scandals were all about who will receive these scarce resources and how. Add to it the high food inflation and the declining income from agriculture that precipitating a crisis in the rural economy.

These electoral issues overshadowed the UPA’s first stint (2004-2009) that witnessed the passage of rights-based legislations—the rural employment guarantee act and the forest rights act. The people who voted the party back in 2009 had a rethink; and, it was all about issues concerning natural resources.

Why should the next government be worried about this? The ruling National Democratic Alliance (NDA) inherited these problems. As it has emerged very clearly, the ruling alliance has not bothered to address these issues. Even though Modi insists that his programmes are meant to structurally change the rural economy, the dice is loaded against his government.

By the time Modi’s government completed a year, the rural crisis unfolded with historic intensity. Rural wages dipped rapidly; programmes like the rural employment guarantee suffered from political apathy. Agriculture further slipped into a recession. Disasters like drought and extreme weather events made farming a sure-shot proposition for economic hara-kiri. In his five years, there has been no revival of rural economy. The more the farmers produced, the more was the losses.

Similarly, responses to this crisis were transactional; whenever a farmers’ protest erupted, the government launched a scheme. Mismanagement and bad implementation has created a situation that is similar to the time of the UPA government.

To add salt to injury, there was an unbelievable trait of denial to the crisis—the government stopped data collection of farmer suicides and it withdrew unemployment data. The deflation in food items was sold as an achievement, even as farmers were out on the streets demanding a fair price for their produce. The debate degenerated from fundamental issues to pure display of “intents”. Instead of seriously addressing the root cause of the agrarian crisis, an agriculture insurance scheme was thrown as a major policy decision.

Whoever comes to power in May this year, will again inherit these problems, though at more severe levels. So, the priority for the next government has to be environmental issues that undoubtedly dictate the rural economy. Erratic weather events are the new normal in an era of climate change. The new government needs to find new ways. Farmers need a new deal—like the Green Revolution in the 1960s. But it has to be an environmental agenda: fixing the soil, water, production and distribution of produce that will ensure farmers a decent economic return.