By pretending the Aadhaar regulation is a money bill, the Modi government has used Nazi tactics to avoid parliamentary debate 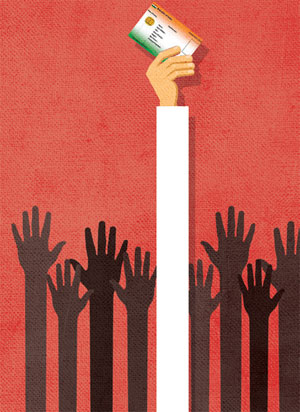 On March 16, something unusual occurred in the Indian republic. A Bill that has widespread social and economic ramifications and contains a set of rules that would have far-ranging consequences on the lives of 1.3 billion Indians was approved by the Lok Sabha after bypassing the Rajya Sabha. Masquerading as a money bill, the Narendra Modi government was able to safely steer the Aadhaar (Targeted Delivery of Financial and Other Subsidies, Benefits and Services) Bill, 2016, through the shoals of parliamentary debate in a shrewd strategy that has left the Opposition fuming.

By calling it a money bill, Finance Minister Arun Jaitley was practising a subterfuge. Under Article 110 of the Constitution, it does not qualify as a money bill because it did not “contain ONLY provisions” dealing with the matters listed therein. Worse, the Speaker’s decision endorsing it as a money bill only compounded the wrong. The Bill, ostensibly, aims at better targeting of subsidies through the Aadhaar Unique Identity Number (UID) issued to the residents of India—it does not claim to verify citizenship— who provide biometric (iris scan, fingerprints) proof of identification.

Targeting of subsidies is something few would quarrel with. So why is there so much concern and criticism of the Modi government’s move to bypass the Rajya Sabha? That’s because the Upper House can only recommend amendments to a money bill but cannot make these mandatory. That is why the five critical amendments proposed by the Rajya Sabha after a passionate debate were rejected by the Lok Sabha.

Ergo, a smooth passage for Jaitley’s sleight of hand on a controversial law. It is controversial because a host of critics from economists and legal experts to campaigners on privacy have warned about the dangers of Aadhaar on several grounds. To start with, the authorities have yet to produce any hard evidence of the benefits of ploughing subsidies and cash benefits through Aadhaar. One of the enticing figures being tossed around is the Rs 12,700 crore to be saved annually on LPG subsidy. Ditto for other direct benefit transfers, such as scholarships and kerosene subsidy. However, field reports by Down To Earth (ªUnique identity crisisº, 15 May, 2012) showed that it is not a foolproof system and is rife with problems.

The Aadhaar story’s irony is that it is the ruling party which is vehemently opposed to the UID project. Its ministers have described it as “a fraud” and “a game played on the poor”. Most damning has been former finance minister Yashwant Sinha who, as chairperson of the Standing Committee on Finance, raised concerns on Aadhaar. None has been addressed so far. Nor the concerns that were raised in ªWho owns our identity?º (Down To Earth, 15 June, 2013).

Reluctant as one is to compare the Modi government to the Nazi regime as critics often do, there is an uncomfortable similarity here with what Hitler’s Third Reich did in Germany. In March 1933, it pushed through the ‘Act for the Removal of the Distress of the People and the Reich’, commonly called the Enabling Act, that vested his government with almost unlimited powers to enact laws, even in cases where the legislation impinged upon core provisions of the Constitution. It allowed the Nazis to enact laws without the consent of the Reichsrat (upper house) or approval of the president.

Hopefully, we are not going entirely down that road. But what prompted the Modi regime to exclude the Rajya Sabha from a very important debate, especially since most of its senior ministers, including Jaitley, come from the upper house? The fact is that the pith and substance of the Bill is about identification of citizens and not about monies to be appropriated from the Consolidate Fund of India. That could have been done by a budgetary allocation.