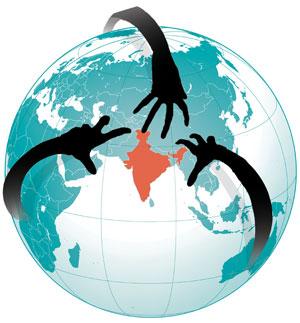 On the one side is the Trans Pacific Partnership Agreement (TPP), a behemoth of an economic bloc that accounts for 40 per cent of the world’s GDP and 26 per cent of global trade. The partnership brings together 12 countries, from the US and Canada to Australia, Brunei, Chile, Malaysia, Mexico, New Zealand, Peru, Singapore, Vietnam and, most significantly, Japan.

Of unprecedented scope and ambition, TPP negotiations were concluded in October 2015 to set up a seamless trade and investment environment halfway across the globe with the stated aim of reducing costs and cutting red tape by promoting competition, trade and investment. However, civil society organisations—and many politicians in the member-countries—view TPP as a threat to public health and access to knowledge. Leaked draft texts of the agreement show that the intellectual property (IP) chapter would have extensive ramifications on freedom of speech, right to privacy and due process, and would also crimp people’s ability to innovate.

If that is TPP, on the other side is another giant formation, the Regional Comprehensive Economic Partner-ship (RCEP) with equally alarming implications for public health and access to knowledge. RCEP is being termed the Asian TPP. The negotiating members of this bloc are ten members of ASEAN or Association of South East Asian Nations, and six other countries that already have trade agreements with the bloc. Of the latter, the only countries that are not part of TPP are India, China and South Korea. Here lies the rub. India and China are under tremendous pressure to accept tighter laws on IP that would restrict their pharma industry.

A leaked draft of the IP chapter that is being negotiated by RCEP has set alarm bells ringing across the global spectrum of public health organisations because the proposals go way beyond multilateral trade rules enshrined in the World Trade Organization. For the humanitarian organisation Médecins Sans Frontières (MSF), the dangers of the RCEP agreement loom large. MSF sources 97 per cent of the medicines needed to treat over a quarter million HIV-AIDS patients globally from India.

Public health lobbies say many of the IP provisions that have been tabled at RCEP negotiations—the 13th round just concluded in Auckland —are those in TPP which is by consensus considered the worst trade deal ever for access to medicines. The effort is push those countries that are not in TPP to adopt similar standards. The most worrying proposals are those which could delay the entry of generic medicines in several low and middle income RCEP countries and which would have a far wider fallout on countries that import generics from India.

Another such provision requires governments to provide patent term extensions to compensate for ªdelaysº in the marketing approval process. In effect, such a measure would extend the monopoly for patented medicines and delay entry of generics further. So, too, the issue of data exclusivity. This is a mechanism to prevent governments from relying on the clinical trial data (provided by the patented drug manufacturer) to register generic versions of medicines—even if the medicines are off-patent, or even if the patent has been revoked. Data exclusivity can be lethal because it even complicates the issuance of compulsory licences to override patents in a public health emergency.

India as the leading maker of generics is facing the brunt at RCEP. Will it be able to stand firm or will its desire to be part of a major trade bloc undermine its defences? This is the question that the domestic generics industry and health workers dealing with crisis of HIV across the world are asking with bated breath. It will be quite a while before they get a clear answer. The trade pact is being conducted in utmost secrecy.