In Jharkhand, movement for self-rule is about seeking better governance and community rights over natural resources 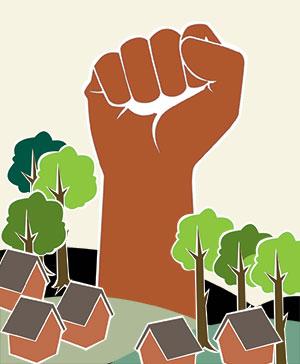 It's eerily calm in this village, located some 40 kms from Jharkhand’s capital Ranchi. Outside the village there is a massive stone, where there is a handwritten declaration of self-rule. It’s called Pathalgadi and its spreading like wildfire across this poor tribal area. I am waiting, with colleagues and media, to speak to people on what has made the village declare itself a republic. Among state government officials and media, the whisper is that this is the handiwork of Naxals; or of opium farmers. But whatever the reason, as they argue, it is definitely misguided, misinformed and undemocratic. It must be immediately crushed.

So, why would villagers, poor and powerless, take on the might of the State? The villagers, say our local interlocutors, are not willing to talk to us. Why? They are afraid. Why? Because till now all media reports have been biased; the police is threatening them. As we wait, the news flashes that 12 “leaders” of this anti-state movement have been arrested. The state crackdown has begun.

Finally, villagers—men and women—come forward. They put out a dari (cotton carpet) on the ground and ask us to sit. There is fear and hostility. We ask: Why self-rule? Why have you stopped officials from entering your village? Are you doing this as a cover for opium farming?

Tension is palpable. Their spokesperson is a young man from the village. He says with force, “Have you read the Constitution?”

He pulls out a book, holds it up and then flips the pages. It’s the Indian Constitution. He then reads Article 244 (1) dealing with the Fifth Schedule of the Constitution, which has provisions for administration of scheduled areas and scheduled tribes. These are tribal areas of the country, which during the British rule, were declared excluded areas—because the Colonial rulers could not occupy these lands. And after Independence, the Constitution gave special protection to these “scheduled” lands and tribals who live there. This schedule, along with Article 13 (3)—which states that there is primacy of non-legislative sources of law, that is to say, custom or usage, having the force of law—gives us the right to self-rule, he says.

What does this mean? We ask. Will you not allow any government official to enter your village? How will you get essential services? The reply to this is acerbic but factual. “We are not denying entry. We are simply saying that if any outsider wants to come to our village, they need to get permission from our head. After all, this is what you do when you go to a government office.”

“But what services are you talking about? It is 70 years after Independence and we have no electricity—there is a pole, wires fixed but no connection. We have no drinking water, no healthcare and our local school has no teachers. If the teacher comes he spends his day filing reports on mid-day meals. Our children get no education.”

“So, we want to manage our affairs. We want the government to route funds through our gram sabha—the traditional village collective, or council.” Some of us are not convinced. Why will the gram sabha work better? We ask. Your leadership is customary and hereditary and will also be corrupt. Why should they be trusted?

Yes, that is true, comes the response. “But it is also a fact that decisions that get taken in the open—with consultation of all in the village—will be less corrupt. Today, we have to pay money to local officials for all development schemes that come to the village. And even after bribing, there is no work or shoddy work. We will push our leaders to work for us, as they will be accountable to us.”

Why have you stopped government officials entry, we persist in asking. Do you know about the “land bank”? “Yes, we know. The Jharkhand government has earmarked large tracts of land for industry. It will provide single-window and simplified land clearances,” he replies. “But do you know that we found that some patches in the ‘bank’ are from our villages. They are our common lands —saran lands where we bury our dead, our forest and grazing land. Nobody asked us before putting those in the ‘bank’ for acquisition. Our land is our only source of livelihood.” The penny drops.

One-and-a-half-years ago, the ruling Bharatiya Janata Party government attempted to amend the two crucial land related laws in the state—the Chotanagpur Tenancy Act 1908 and the Santhal Pargana Tenancy Act 1949, both restrict transfer of tribal land to non-tribal. After protests, the Governor returned the bills. But this has spooked people.

What will happen next? The state can use its might to put leaders in jail and break the stones that declare self-rule. This is a no-brainer. But it is also a fact that this will not get rid of the root cause of this “rebellion”. The question is if this movement for self-rule could be cajoled into becoming a carrier of transformation in the region. It is a movement, which seeks better governance and community rights over natural resources—land, water, forests—for better management. After all, Mahatma Gandhi envisioned the village republics as the units of governance in India. We will celebrate his 150th birth anniversary this year.

So what will it be about?