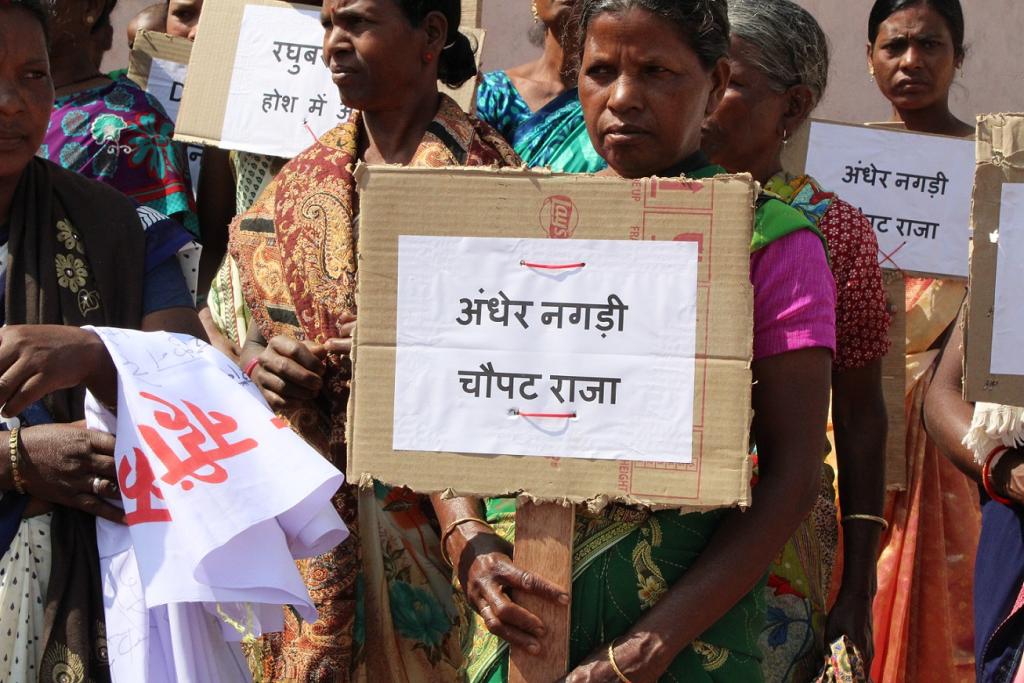 Thousands of residents of Nagri block arrived on the streets of Ranchi to protest against the pilot scheme of implementing DBT in PDS. Credit: Debmalya Nandy

Experimenting with hunger has become a common tendency of the Jharkhand government. While hunger deaths have been reported from different parts of the state, the government seems to be in mood for running more trials and pilots in the public distribution system. Starvation deaths are a sign that the mechanism of supply of food grain to rural households needs serious introspection and no further experiments.

The chief minister claimed that a whopping Rs 225 crore was saved in a year following the implementation of the Direct Benefit Transfer (DBT) system and assured that the households will get full ration after its implementation in Public distribution system (PDS) when he announced the pilot project at Nagri Block of Ranchi district on October 4, 2017.

According to this programme, the money for grain meant for rural households was to be deposited in their bank accounts and each household is entitled to receive Rs 1,106—which is the price of 35kg of grain at the rate of Rs 31.60 per kg. This money could be used to purchase ration from fair price shops. Earlier, the beneficiaries of Nagri had to purchase grains from the ration dealer at the rate of Rs 1 per kg.

Five months later, on February 26, 2018, thousands of residents and ration card holders of Nagri arrived on the streets of Ranchi after a 10-km-long march from Nagri  to protest against the pilot scheme of implementing DBT in PDS. The scheme, which, according to the CM, was aimed at eradicating middlemen and supply full ration to the entitled families, has left the people largely deprived of food grains.  An unwise and unnecessary policy by the state government left the poor people hassled, dejected and deprived. It resulted in complete disruption of food grain distribution system.  The citizens of Nagri, on February 26, 2018 demanded that the DBT policy in ration should be rolled back and the old system of purchasing ration at Rs 1 per kg should be brought back. A delegation representing the protestors had met the Governor, too, with the demands on the same day.

Earlier, a survey conducted by a group of independent student volunteers revealed that the newly launched scheme has put ration card holders in great agony with 97 per cent out of the 244 randomly selected households from 13 gram panchayats of Nagri Block want the DBT system to be withdrawn and the old system of ration distribution to be revived. The statistical analysis of the data captured during this survey shows that the households have spent an average 12 hours each month at the banks, Pragya Kendras and ration shops and 28 per cent households had to spend an average 15 hours a month for collecting rice. 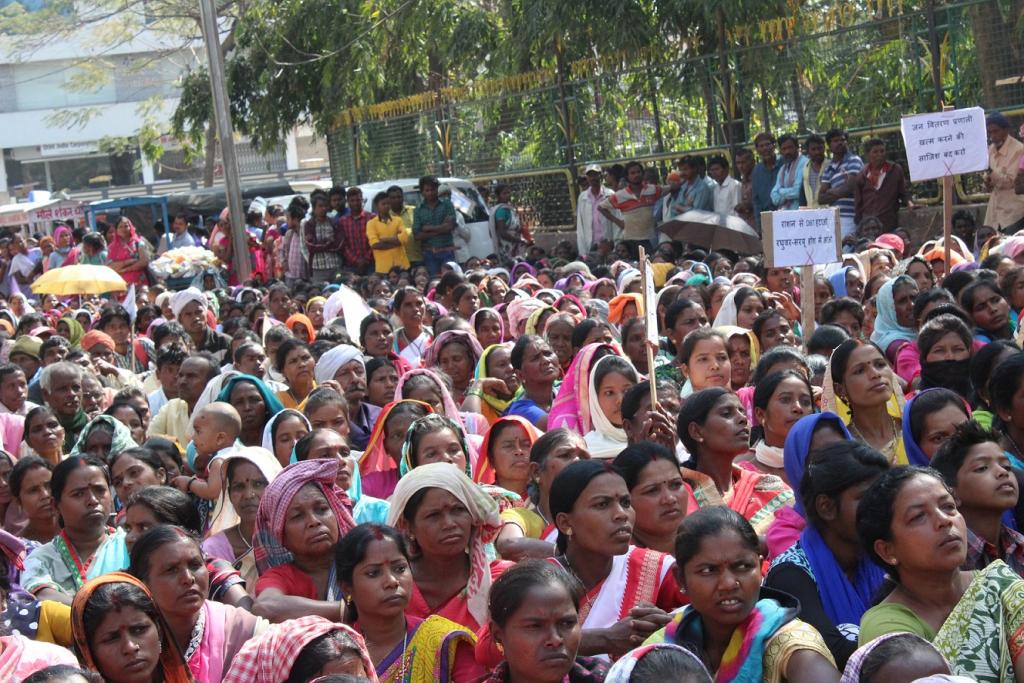 It also revealed that out of the four installments of the DBT money (October 2017 – January 2018), the households surveyed received 2.1 installments on average. It means the families are not getting their DBT money regularly. Moreover, 70 per cent of the families hassled themselves to find out in whose account has the DBT money been transferred. We know from earlier experiences that Aadhaar-linked services had spelt trouble. DBT money for MNREGA wages and LPG subsidies went to Airtel payment banks and not to beneficiaries’ bank accounts due to errors in Aadhaar seeding and a flawed design in Aadhaar architecture as well.

People had to wait for long hours in the banks, which are about 4.5 km from their homes on an average, and Pragya Kendras to even find out whether their subsidy amount has been deposited as the rural banks are not equipped with modern infrastructure and human resources to deal with such huge customer rush. As a result, only 2.5 out of the four installments of ration could be collected from the dealers.

Also, it is not a full subsidy scheme as families have to add Rs 1 per kg from their pockets to the DBT money (Rs 1,106) to purchase grains from the fair price shops. It is needless to say that the system has absolutely not resolved the issue of ration cuts by the dealers, who continue to supply fewer grains to the families. Lot of families, mostly destitute and resource poor, have not collected their ration at all due to the hassles involved with it, and in return, have got notice from the department that their ration cards could be cancelled if they do not collect monthly ration. A system as insensitive as this could only lead to a long march to the city with only one demand “DBT hatao; Ration bachao” (Rescind DBT; Revive Ration).

Introduction of the EPOS (Electronic Point of sale) machines and online transaction system, followed by an Aadhaar-based biometric authentication process, and now, this pilot project of “money for grain”, have made distribution of ration in rural areas of Nagri severely complicated.

More often, in each village of Jharkhand, we come across several cases of thumb impression authentication failures and OTP not generated due to lack of network coverage. All these are resulting in no distribution or less distribution of food grains to the target households under the DBT scheme. Technical glitches aside, the Aadhaar-linked service delivery system had further added to the predicament of rural households with the state government denying ration to those whose Aadhaar cards are not linked to ration cards.

Random deletion of ration cards in order to meet the 100 per cent Aadhaar linking targets has been exposed earlier when  surveys by independent researchers rejected the chief minister’s claim of saving 72,000 tonnes of food grains by scrapping 11,64,000 illegal ration cards and  showed that genuine ration cards have been deleted without knowledge of the cardholders. Similarly, the NREGA job cards, too, were randomly deleted to meet the 100 per cent DBT target. Later, several districts had to write to the state for reissuing of deleted cards.

Now that the pilot project had failed and the residents of Nagri themselves have rejected DBT in ration, the government was expected to behave sensitively towards the issue. But much to the disappointment of the Nagri residents, it has not come up with any concrete steps as yet. The representatives of people’s forum called “Ration Bachao Manch” had met the Food Supply minister Mr Saryu Roy, but without much of a success. Although political assurance had come that a solution would be ensured by March 31, 2018, no action on the field has been observed.

The people of Nagri has made it clear that they won’t settle for anything less than the withdrawal of this anti-people policy in public distribution system which has disrupted welfare at the grass roots and has completely proved that the state government is ignorant of the ground realities and adamant in dealing with public sentiments.